Marcel Duchamp and his pipe(s) 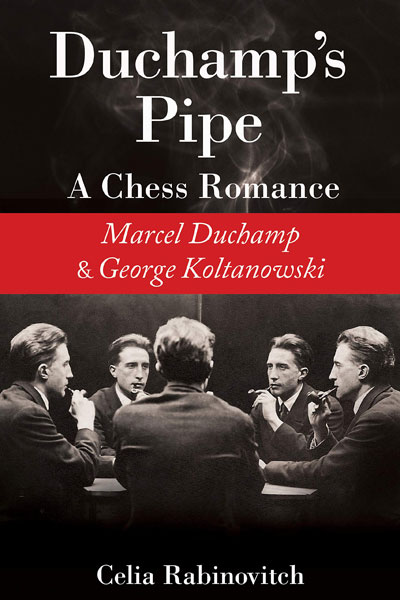 December 2, 2019: Celia Rabinovitch's book - Duchamp's Pipe: A Chess Romance - is due to be published in February 2020. Taking as its inspiration a pipe that Marcel Duchamp gave to the professional chess player George Koltanowski, the fascinating book explores their friendship, their lives and, of course, their mutual interest in chess.

The pipe in question was a geometric smoking pipe owned by Duchamp which went for $87,500 at Christie's in New York in 2016. Duchamp gave it to Koltanowski after he won a chess match against Duchamp in 1944.

In addition to the main text, the book includes a chronology of events from 1887 to 2016, more than seventy photographs and illustrations, and lists of artists and thinkers relevant to the era.

Andy Warhol is also mentioned. In the chronology, Rabinovitch notes that "in 1965 Duchamp organised an exhibition in New York Homage to Chess (Hommage a à Caïssa), to support the Marcel Duchamp Fund of the US Chess Federation. Playing with the title, Dali names his chess set Homage to Marcel Duchamp. At the opening, held at the Cordier & Ekstrom gallery, MD plays chess with Salvador Dali. He is filmed by Andy Warhol and photographer Nat Finkelstein."

Mary Russell's photographic memoir to be published in March 2020 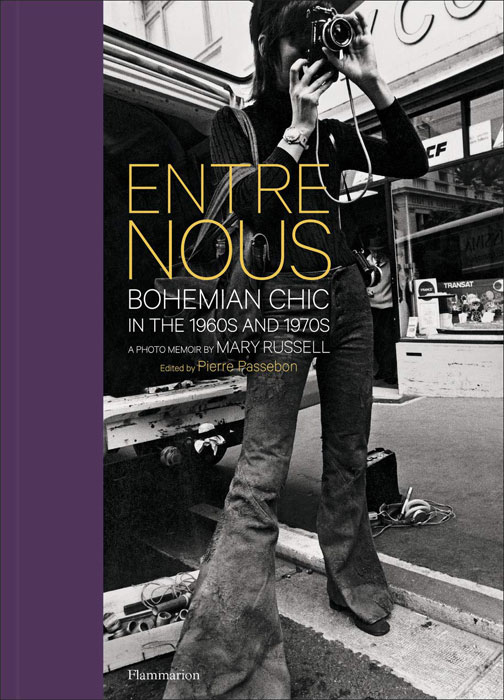 November 24, 2019: Mary Russell's photographic memoir, Entre Nous: Bohemian Chic in the 1960s and 1970s, will include photographs of Andy Warhol and cohorts in Paris. The book will be published in March 2020.

Russell was a fashion correspondent for Glamour, Vogue, Women's Wear Daily and the New York Times, as well as a stylist for Helmut Newton, David Bailey, Lord Snowdon and Francesco Scavullo.

Did John Giorno have sex with Andy Warhol?

November 23, 2019: Updated the John Giorno page with a quote about whether he had sex with Andy Warhol from a 2007 issue of the Evening Standard.

Co-author of Warhol film cat. rais. to present The Life of Juanita Castro

November 20, 2019: Bruce Jenkins, the co-author of the second volume of the Andy Warhol film catalogue raisonné (covering 1963 - 1965), will present a free screening of Warhol's film, The Life of Juanita Castro (written by Ron Tavel) at the Block Museum of Art at Northwestern University in Evanston, Illinois on Friday, November 22, 2019. Details at The Block. Jenkins is covering the films from 1963 to 1965 in the cat. rais; co-author Bill Horrigan is covering 1966 - 1968.

Kelly Cutrone on 15 minutes of fame 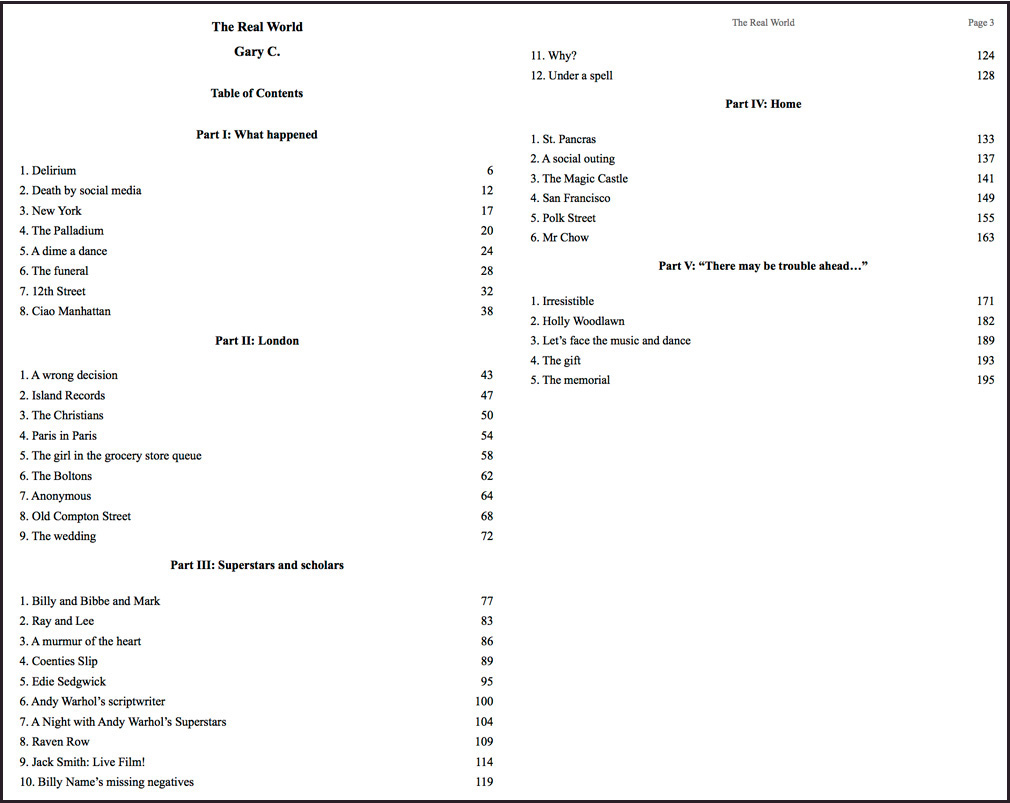 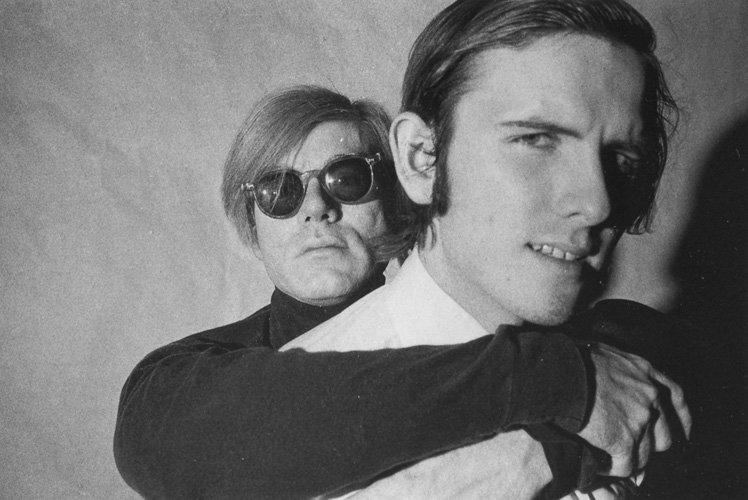 November 7, 2019: I've updated the Andy Warhol filmography which I started over ten years ago. Until the future volumes of the film catalogue raisonné are published, it's the most comprehensive filmography available - if you have any corrections or additions (with references to screenings, ads or essays), let me know: garycom.now@gmail.com. 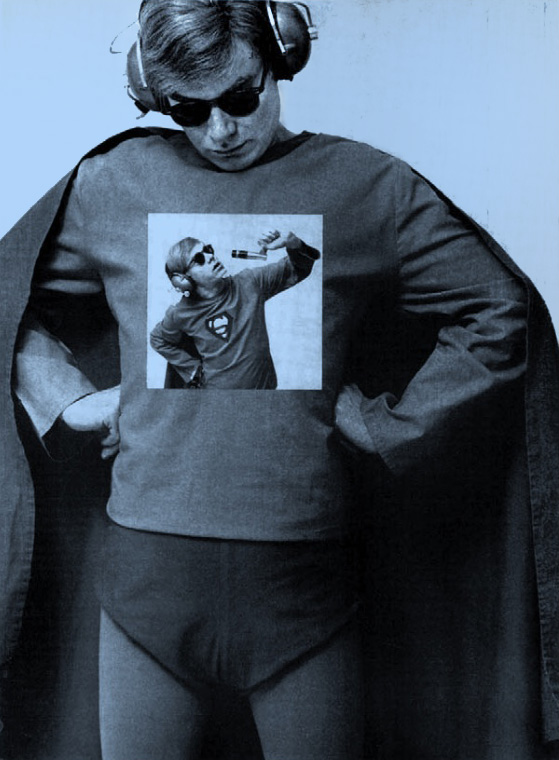 November 3, 2019: Judith A. Peraino, The Cornell University professor who discovered the "lost" Lou Reed songs inspired by Warhol's Philosophy book on a cassette at the Andy Warhol Museum (and another cassette of the "lost" songs at the New York Public Library), has now given an account of how she found the music to the Washington Post - see "How I discovered a dozen new Lou Reed songs."

Peraino's journey is a fascinating read. It eventually led to her article "I'll Be Your Mixtape: Lou Reed, Andy Warhol, and the Queer Intimacies of Cassettes" in the Journal of Musicology - which also refers to Jennifer Sichel's groundbreaking article about the original tapes for the Gene Swenson interview in which Warhol was alleged to have said he wanted to be a machine. Possible reasons for the Lou Reed tapes indicated in the Peraino article may have been a Broadway show based on the Philosophy book.

The U.K. press is going crazy over Warhol's drag queens 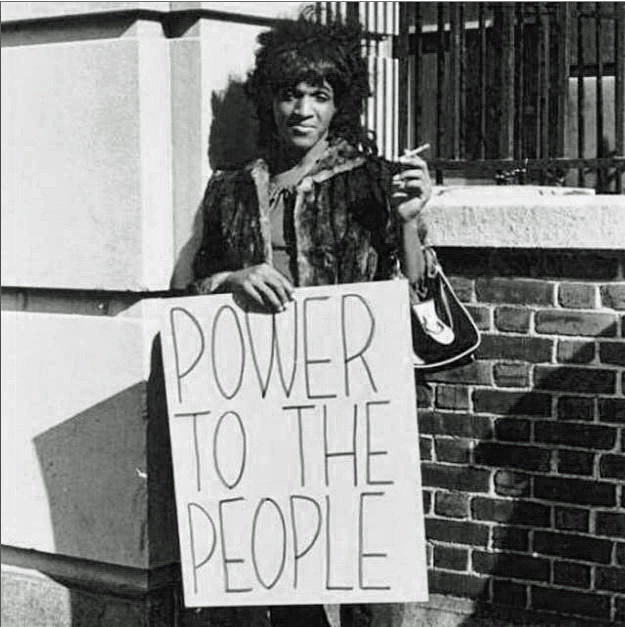 October 29, 2019: The U.K. press is going crazy over the Tate Modern's announcement that they will be showing Warhol's paintings of drag queens which were also produced as prints as the Ladies and Gentlemen series. Surprisingly, they seem surprised that Warhol did paintings of drag queens. Some of the articles pick up on what I wrote a considerable time ago in "Andy Warhol's Ladies and Gentleman paintings in Italy."

There is an excellent documentary about one of Warhol's models on Netflix at the moment - "The Death and Life of Marsha P. Johnson." If you are reading this site I don't need to explain who Marsha was. You already know. The documentary also explores the role of the Mafia in Gay Pride and the battle between the middle-class queens who craved mainstream acceptance vs the type of outsiders painted by Warhol. (Unfortunately, the middle-class queens won.)

October 28, 2019: Ten Screen Tests by Andy Warhol will be shown at the Barbican in London on February 27, 2020 with a new live soundtrack created and performed by Leif. Details at: "Andy Warhol's Screen Tests Reel #10."

The Screen Tests being shown are the short "living portraits" created by Warhol and not the full-length Screen Tests with scenarios by Andy Warhol's scriptwriter, Ron Tavel. As Tavel wrote in 2007, "Those 3-minute studies are Living Portraits. No one was being screen tested." (The Real World, p. 100)

October 26, 2019: The Tate Modern is now accepting bookings for the talk by Warhol biographer Blake Gopnik and Olivia Lang which will take place on March 12, 2020 at the Tate Modern in London as part of their six month Andy Warhol exhibition.

October 23, 2019: One thing that surprised me about the exhibition catalogue that accompanies the current Andy Warhol retrospective in the States was the lack of attention paid to Andy Warhol's most iconic work, the Campbell's Soup Cans. I have updated my essay examining the origin of the paintings at "The Origin of Andy Warhol's Soup Cans or The Synthesis of Nothingness."

Although the retrospective catalogue may be an attempt to re-invent Warhol, it is impossible to examine an artists' ideas outside of the milieu from which they sprang, particularly with an artist like Warhol who was like a cultural sponge. Hopefully the essay fills in some of the gaps. The importance of 'Warhol's milieu' is also the reason that my Warholstars Timeline is more than just a list of biographical events.

Warhol's choice of soup cans as subject matter had to do with the emphasis on the commonplace object by other artists at the time - with a a nod to Marcel Duchamp and his readymades. The Campbell's Soup Can paintings were the Warholian equivalent of Marcel Duchamp's Fountain and Jasper Johns' Light Bulb. When Warhol was searching for a subject for his paintings, he was looking for "a thing" - a neutral, commonplace object - as he recounted during an interview by Benjamin Buchloh:

I guess it happened because I... I don't know. Everybody was finding a different thing. I had done the comic strips, and then I saw Roy Lichtenstein's little dots, and they were so perfect. So I thought I could not do the comic strips, because he did them so well. So I just started other things....   I wasn't thinking of anything. I was looking for a thing. (BB120) (See "Andy Warhol: from Nowhere to Up There," p. 30) 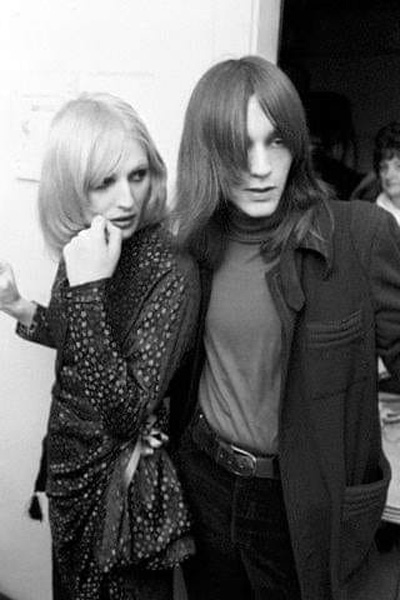 October 20, 2019: Jeremiah Newton, the executor and friend of Candy Darling, has accused the cabaret entertainer, Penny Arcade of theft on his Facebook page: 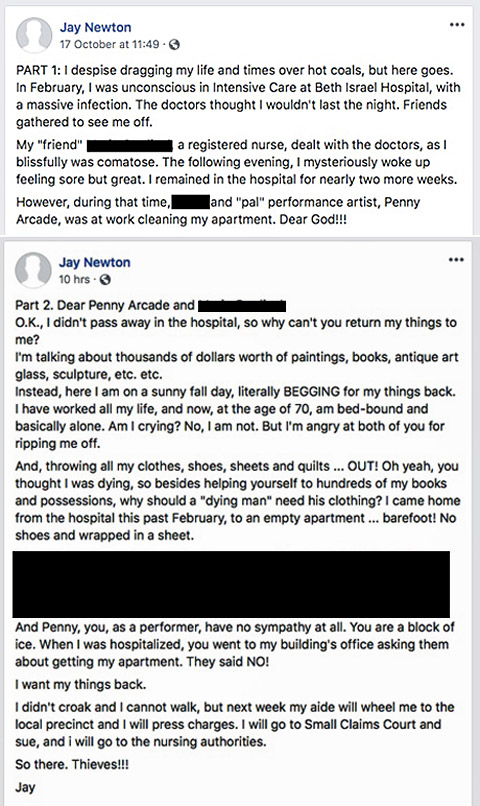 This isn't the first time that Penny Arcade has been involved in controversy. C. Carr, who is currently writing at book on Candy Darling, was the author of an article in the Village Voice in 2004 about Penny's efforts at wresting control of Jack Smith's archive from Smith's family- see "Flaming Intrigue."

Arcade was again involved in controversy when she was the spokeswoman for a crowdfunding page set up for Holly Woodlawn when Holly was dying. Joe Dallesandro's wife, Kim, noticed that the beneficiary of the fund was not Holly - it was a Los Angeles real estate agent named Robert Starr. (See "Questions raised over Holly Woodlawn fund.")

October 19, 2019: A memorial to David Weisman is currently in the planning stages under the guidance of his co-executors Chase Mellen III and Jim Thompson. Weisman co-directed Ciao! Manhattan with John Palmer and was recently granted the publicity rights to Edie Sedgwick.

As noted previously, David Weisman died on October 9, 2019. The cause of death has now been confirmed as complications from West Nile virus. He had also battled cancer in the past. His obituary is here.

Donations in Weisman’s memory can be made to: Savetigersnow.org.

October 17, 2019: The following films by Andy Warhol will be screened at the Art Institute of Chicago during the Andy Warhol retrospective originally organised by Donna De Salvo (De Salvo will be giving a talk on November 20, 2019):

Mark [Lancaster] was mentioned in Popism: The Warhol Sixties as an art student from England who visited the Factory when Warhol was filming Batman/Dracula and ended up appearing in the film. I had wondered what happened to him. As fascinated as I was by well-known “superstars,” like Edie Sedgwick, I was even more curious about people like Mark who appeared in a few films and then disappeared. I asked him what other films he was in. He said that he gave one of Warhol’s superstars, Ondine, a blow job in Couch and was also in a male-to-male Kiss film with Warhol’s assistant Gerard Malanga.

Gerard was straight, so I wondered whether they had “french-kissed.” Mark answered: "Yes, Gerry and I did 'French kiss.' How else can you keep kissing somebody for three minutes, or was it six? I did see that movie right after it was processed, and I think I occupy most of the screen, it is all close-up head shots, probably because I was pushing against him harder than he was against me. He was sexy, in a way, but not my type, though I spent a good deal of time that summer trying to figure that out and experiment with ‘types'..."