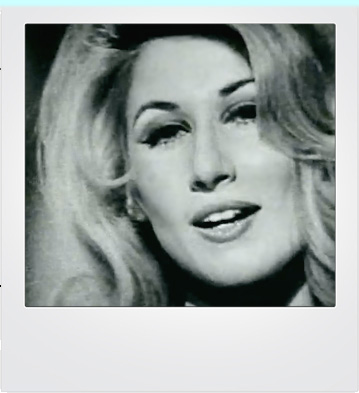 In addition to appearing in Andy Warhol's films and various fashion magazines during the sixties, Jane Holzer also recorded a number of songs including "Rapunzal" and "You're Gonna Hurt Yourself."

In 1979 she appeared in a musical, Got Tu Go Disco, reportedly based on the story of Cinderella. The production was produced by Jerry Brandt, with costume design and artistic direction by Joe Eula. It opened at the Minskoff Theatre in New York on 25 June 1979 and closed 5 days later on the 30th. (IB1,IB2,IB3,IB4)

In 1984 she open an ice-cream parlour in Palm Beach, Florida named Sweet Baby Jane's which featured the "Andy Warhol Special" - six flavours of the customer's choice.

"In the 1980s, Andy and Halston came down for the opening of Sweet Baby Jane’s, my old ice cream shop. They were fun, but I hated that business: lines out the door, the manager off someplace not working, and customers who would ask for twenty samples and then spend a $1.50. Plus, I ate too much ice cream—it was delicious."

In 2012 she was an executive producer for Harmony Korine's film Spring Breakers, starring Selena Gomez. (Korine also wrote Kids and directed Gummo.) Previous films that she had been involved with as an associate producer included Kiss of the Spider Woman (1985) and Paul Morrissey's Spike of Bensonhurst (1988).

In 2014 Jane was the subject of the exhibition "To Jane, Love Andy: Warhol's First Superstar" that took place at the Norton Museum of Art in West Palm Beach, Florida from 2 February 2014 to 25 May 2014. W magazine ran an article on her and the exhibition (with slideshow) on 31 January 2014 here.