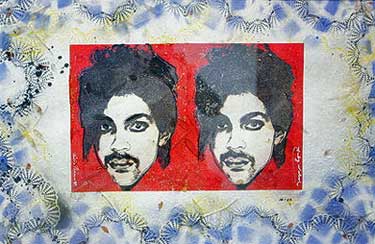 On February 27, 2008 a press release appeared on the internet regarding an artist who was called “Pietro Psaier.” The press release can be found here. The press release stated that “Whilst working as a waiter in the Greenwich Village Gaslight Café in 1964 he [Psaier] met Andy Warhol and an extraordinary bisexual relationship blossomed between the two. Psaier began designing backdrops for Warhol's films and eventually produced layouts, silk-screens and joint works at Warhol's studio 'The Factory', although few artistic or financial rewards would come his way.”

On July 19, 2008 I received the following enquiry regarding the same artist: “Hi I am doing research on a artist by the name of Pietro Psaier, apparently he was an associate of Any Warhol. He died in the 2004 Tsunami. Do you know anything about this man.”

I replied to that email saying that I had no information about Psaier being an associate of Andy Warhol and that he was not mentioned in any of the Warhol biographies. The sender of the email then responded, asking me if there was “such a person as Pietro Psaier.” I wrote back telling the sender that I was going to get to the bottom of this as I had looked at the Wikipedia biography for Pietro Psaier and was concerned by the allegations made about Psaier collaborating with Warhol. An early version of the Wikipedia page appears here.

I also googled the name of the sender of the emails and it turned out to be the “executive producer” of a film on Psaier, working for P.S.I. films. I replied to the sender saying that if he was doing a film on Psaier didn’t he know whether he existed or not and the sender replied “What I am doing is making a documentary about this subject, either way it goes (scam or not) is a mystery for me right now. I just want to get to the bottom of it.”

I stress that the words "scam or not" were used by the filmmaker, not by myself. The problem was that the filmmaker did not seem to know whether Psaier existed or not, yet it was alleged on the film company's website that “Psaier worked with Andy Warhol in what was known as The Factory in New York.” When I expressed my concerns about the allegation to the executive producer of the film he responded, writing that “your points are valid” and asked me to be interviewed for the film. I declined to be interviewed but did do further research and found there had been numerous exhibitions in museums and galleries in Spain of work alleged to be collaborations by Warhol and Psaier. 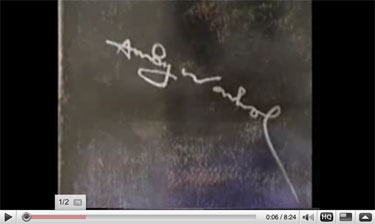 The signature of Andy Warhol as it appears on a painting alleged to be by Andy Warhol and Pietro Psaier as shown at the Atlantica Gallery in Spain (You Tube footage at: here)

The Spanish exhibitions included the following:

1."Andy Warhol, Pietro Psaier and The Factory: Pop Icons" at the Museo Provincial de Lugo in Lugo, Spain from October 31 to December 8, 2003.

The exhibition was described on the radioformula.com website as “50 works, including oil paintings and serigraphs, signed by Warhol and Psaier… “ The description claimed that Psaier returned to his native Italy where he founded the “Center of Art and Design.”

The exhibition consisted of 34 works of art and was described as “A representative sample of the work of the founder of Pop Art, Andy Warhol, and one of his students, Pietro Psaier…” An exhibition catalogue was also published for that show.

Details of that exhibition can be found in El Pais here.

Included work by Warhol and Psaier and took place from . The press release for the show repeated the assertion that Psaier and Warhol had collaborated although in this version Psaier also "met Millares, Saura and Tapies:"

"Pietro Psaier. He studied sports car design for Enzo Ferrari. Between 1958 and 1962 he studied at the Centro Cultural Italiano in Madrid, where he met Millares, Saura and Tapies. Later, on a trip to New York, he met Warhol, and started to collaborate with him and explore the language of Pop Art. He died in the tsunami in 2004." 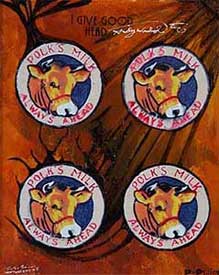 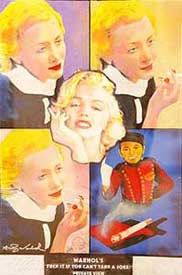 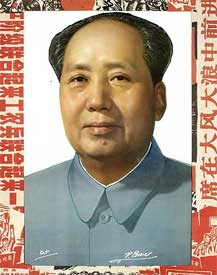 In addition to the museum and gallery exhibitions there have, of course, also been independent sales of Psaier's work. The London auctioneer, John Nicholson, who issued the press release referred to above claimed in an article in the Daily Telegraph that he had sold "nearly 1,500 of Psaier's works since 2004."

One press release issued by the same auctioneer for a sale of Psaiers on April 3, 2008 was headed "London has a passion for Psaier's Pop Art" and continued "Following on from the successful opening of auctioneer John Nicholson's London office, they held their first inaugural auction in St. James on Thursday 3rd April. A star attended Champagne reception was held on the Tuesday night with several famous actors, actresses, footballers and serious collectors not only from London but all across the world coming to see some wonderful Pop Art." (Press Release here)

Later in the press release it notes "The auction prices for Psaier's work have increased drastically over the last two years and a new record was achieved at the London auction. The chalk drawing of Marilyn Monroe in red, a joint work between Pietro Psaier and Andy Warhol, was produced in 1979 as an initial sketch for a larger oil painting, it eventually sold for £14,000 and similar work in blue sold for £13,000. Another Psaier and Warhol joint work chalk drawing of Che Guevara sold for £7,000..."

None of the "joint works" mentioned by Nicholson had been authenticated by the Andy Warhol Authentication Board. This is not to disparage John Nicholson of course. As one of the auctioneers for the television show Celebrity Cash in the Attic, I realize that he has done good work. Here is an article, for instance, about him auctioning off Edwina Curry's discarded antiques in the Mid-Sussex Times here.

John Nicholson may, after all, have believed that the "joint works" attributed to both Warhol and Psaier were legitimate and that the claims that appear on his press releases were true. But, given that Pietro Psaier is not mentioned in any books about Warhol or his art, it seems highly unlikely that someone by that name played an integral role at the Factory as is claimed, particularly given that none of the people who are still alive and who were part of the Factory remember this person. Neither the auctioneer nor the Pietro Psaier researcher, Jacqueline Chapman, have produced a single person who was part of Warhol's coterie who remembers "Pietro Psaier."

In addition to the sales mentioned above, there have, of course, been numerous other sales which have already been documented in the press, including at the major auction houses. Bonhams sold a number of works attributed to Psaier which also are described as bearing "Andy Warhol's signature" in 2005 and 2006. Philips de Pury offered a work attributed to Warhol and Psaier in 2008. Christie's sold a work attributed to Warhol and Psaier in 1996. And then there are all the other gallery sales. Coloured Rain Gallery in Northern Ireland, for instance, has sold a number of Psaiers - see here. Another company in London is offering quite a few Psaiers online here. The list could go on and on. All one has to do is 'google' or 'bing' the words "Pietro Psaier."

The sale of Psaier's work in the U.K. started out as a trickle and ended up as a torrent. Were the exhibitions and initial sales part of a process called "seeding" employed by art forgers to establish a false history for an artist who may or may not exist? No birth certificate has ever been provided for this artist and, according to a Sunday Times article on Psaier, State of California probate documents which accompany some of these paintings are "fraudulent."

To "Claims and Contradictions"