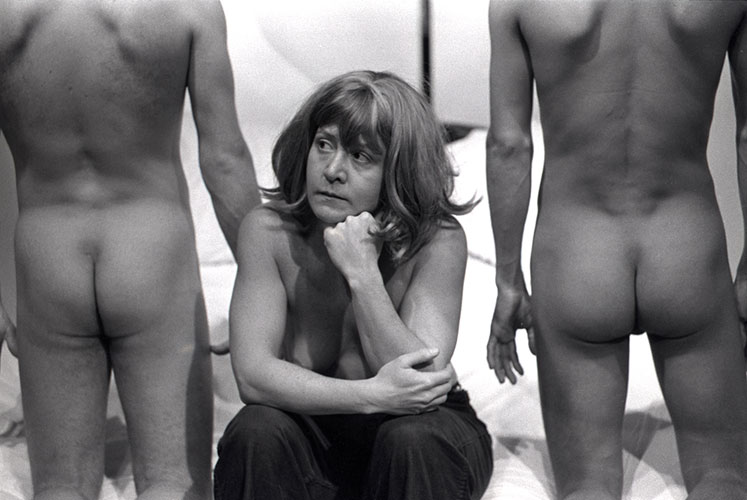 Clive Roller (center) as Amanda Pork (the character based on Brigid Berlin) and the Pepsodent Twins (based on Jed and Jay Johnson) in the New York production of Andy Warhol's Pork
(Photo: Leee Black Childers, 1971)

Andy Warhol's Pork was adapted and directed by Anthony J. Ingrassia and opened at La Mama for a two week "trial run" on May 5, 1971.

Jayne (then Wayne) County, who played the part of Vulva Lips (based on Viva), recalls the circumstances behind the creation of the play:

... Andy Warhol contacted Tony Ingrassia and told him he wanted to do a play from all the tapes he'd been making of his private telephone conversations with the Factory crowd, people like Brigid Polk and Viva. He turned all these incredible tapes over to Tony, who had to transcribe them and put them into play form. Warhol thought Tony was the perfect person to do it... and he wanted me and Jaime DeCarlo Lotts and Tony Zanetta to be in it.

It would be Andy Warhol's first stage production, and basically it was just all of the Factory people portrayed on stage in an exaggerated, ridiculous way. Brigid Polk was turned into a character called Amanda Pork, played by Cleve Roller. My character was based on Viva, but the name was changed to Vulva Lips. When Viva heard about it she was not amused. She used to ring up the Factory and scream at Andy and Paul Morrissey [put] down the phone. 'At least Brigid is being played by a woman!' she said.

By this time I'd met Andy Warhol quite a few times, and I'd been up to the Factory a bit. I'd seen Warhol at parties ever since I'd been in New York, but it wasn't until after Femme Fatale that I was introduced to him properly, by Jackie [Curtis] I think. I was very much in awe of him because he was the Andy Warhol... When we were rehearsing Pork, Andy came down to a few rehearsals with Paul Morrissey. It made me really nervous and I completely clammed up; I couldn't remember any of my lines with them around. Warhol was asking "Oh... what's the matter with Wayne?" (JCR74-75) 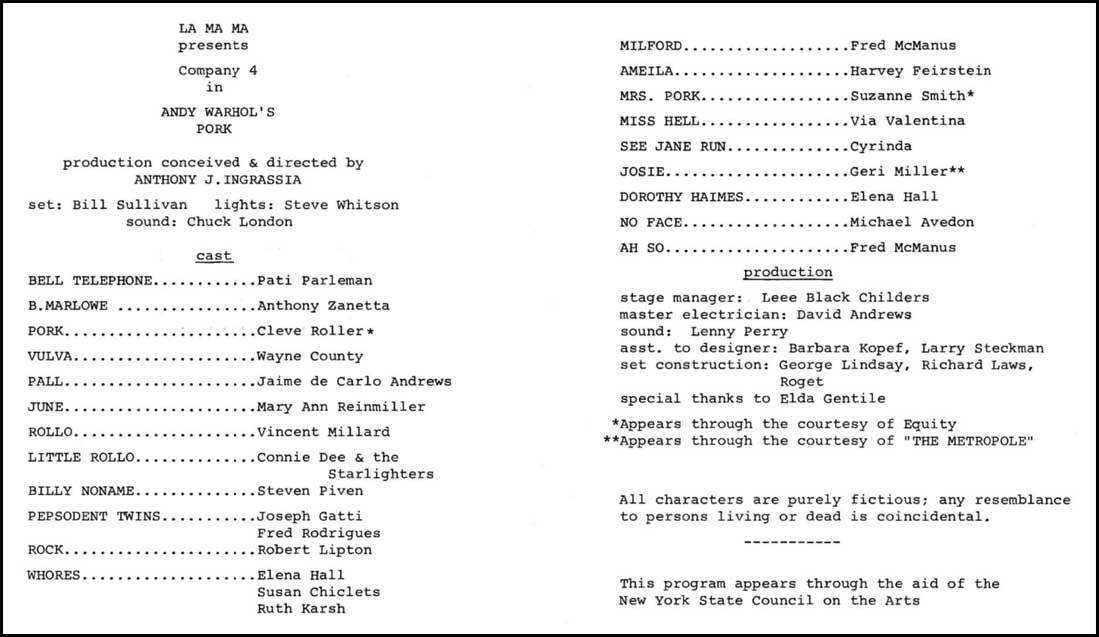 Other characters in the play included the "Pepsodent Twins" who, according to Jayne, represented Warhol's boyfriend Jed Johnson and his twin brother, Jay. According to a later review of the London production, "[Amanda] Pork is estranged from her husband and attended by the Pepsodent twins, two boys alike only in their nudity and their pastel powdered genitals." (LL1133) (The real-life Jed Johnson would tragically die in the TWA 800 plane crash in 1996, although he and Warhol had broken up by then.)

In regard to the tapes used for the dialogue in Pork, Bob Colacello claimed in the Brigid Berlin documentary, Pie in the Sky: The Brigid Berlin Story, that Brigid had sold some tapes of her conversations with her mother to Andy and that Warhol then used them as the basis of the play:

I always remember Brigid having these fights with her mother on the telephone and tape recording them and then selling Andy the tapes for twenty five dollars each I think and Andy turning them into a play called Pork. (BB51.17-51.27)

Twenty five dollars in 1971 was worth almost $150.00 in 2016 terms - a fairly significant amount for an artist who wasn't particularly known for his largesse. Colacello did not mention the money in an earlier account of the tapes he included in his book, Holy Terror: Andy Warhol Close Up (1990). Nor did he mention the money in the account he most recently gave in his introduction to Brigid Berlin Polaroids (2015).

In Holy Terror, Colacello writes "[Brigid's mother] Honey would call Brigid at her room in the George Washington Hotel, a glorified flophouse near Gramercy Park, and berate her in the harshest and most hysterical terms. Honey was usually tipsy and Brigid was usually high, and their conversations were straight out of Edward Albee. In the middle sixties, Brigid began taping the calls. Then she thought it was funny to call Andy and play him the tapes. Andy thought it was even funnier to tape the tapes. He was home in bed recuperating from the shooting then, so he had plenty of time to listen... Brigid's tapes became part of Andy Warhol's Pork" (BC66-7)

In his introduction to the book, Brigid Berlin Polaroids, he simply writes that Brigid "was surely the only alumna of the Convent of the Sacred Heart to record her fights on the phone with her mother and turn over her tapes to Andy Warhol to turn in to an off-Broadway play... (BBP15)

As already noted, the character of Amanda Pork was based on Brigid Berlin (or Brigid Polk as she was known because of the "pokes" she gave to her friends of syringes full of methamphetamine.) Brigid had exhibited her Polaroids, organized in book form, at Heiner Friedrich's gallery in Cologne in 1970 - the year before Pork was produced. One of the books of Polaroids at the exhibition was titled "Mr. and Mrs. Pork" and consisted of photos of her and Warhol. (BBP198)

According to Jayne County, "Originally there was going to be a character in Pork based on Jackie Curtis. (One of the actors in the New York production of Pork, Jaime DeCarlo Lotts, had also appeared in productions of Cockstrong which featured Jackie Curtis and Heaven Grand in Amber Orbit written by Curtis. (LM))

Originally there was going to be a character in Pork based on Jackie Curtis. She was going to come stomping on stage every once in a while and go, "Where's the food?" and everyone in the cast would take one sniff and pass out in a swoon because of the B.O.. Tony decided it was too vicious and decided to take it out. The person who had been cast in that part was Harvey Fierstein of Torch Song Trilogy fame, who was just starting his career. We kept him on in the show, playing a maid.. (JCR75)

After its run at La MaMa had finished, a fairly extensive and generally favourable review of the play by Grace Glueck appeared in the New York Times.