The festival was referred to as "a series called Expanded Cinema" in POPism when the book was first published in 1980:

In January [1966], Jonas [Mekas] moved the Film-Makers' Cinemathèque from Lafayette to West 41st Street. He was in the middle of a series called Expanded Cinema where artists like Jack Smith and La Monte Young and Robert Whitman would combine cinema images and projectors with live actions ad music. I remember Oldenburg's piece where he dragged a bicycle down the aisle from the last row of the theater while a movie was being projected, and I remember Rauschenberg where he was a walking light metaphor, so beautiful to look at, electrified and standing on glass bricks holding a live wire and fluorescent tubes - the artist Arman had made glass shows for him so that the electricity wouldn't be conducted. (POP143)

(Note: The festival was actually finished by January 1966. The move to West 41st took place in the beginning of December. For a history of the venues used by Mekas for his Cinematheque, see: "Jonas Mekas and the Film-Makers' Cinematheque.")

In his biography of Warhol, David Bourdon referred to the series as the "Expanded Cinema festival."

"Warhol's involvement with psychedelic light shows stemmed from his participation in an Expanded Cinema festival at the Film-Makers' Cinémathèque in November 1965. Jonas Mekas and his colleagues at the Cinémathèque had organized an ambitious series of programs that surveyed a broad spectrum of formal innovations involving projected images... The participants included several widely known figures, such as Claes Oldenburg, Nam June Paik, Robert Rauschenberg, and Robert Whitman, as well as a number of emerging psychedelic 'light' artists such as Jackie Cassen, Don Snyder, and Gerd Stern and the USCO group. Warhol's two evenings, November 22 and 23, featured split-screen movie projections accompanied by a rock group and the early glimmers of a light show." (DB218)

More recently, however, Professor J.J. Murphy referred to the same festival as the "New Cinema Festival" in the "Expanded Cinema" chapter in his book, The Black Hole of the Camera: The Films of Andy Warhol (London: University of California Press, 2012):

J.J. Murphy (The Black Hole of the Camera: The Films of Andy Warhol):

Although it was an international phenomenon, occurring in a number of countries simultaneously, 'expanded cinema' gained prominence in the United States in late 1965, largely as a result of the New Cinema Festival at the Film-Makers' Cinematheque. Jonas Mekas staged the series and then praised it effusively as an exciting new development in his influential movie columns for the Village Voice. 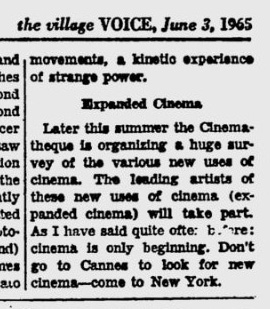 The festival began on November 1st and was advertised as the New Cinema Festival 1 as shown by the ads below: 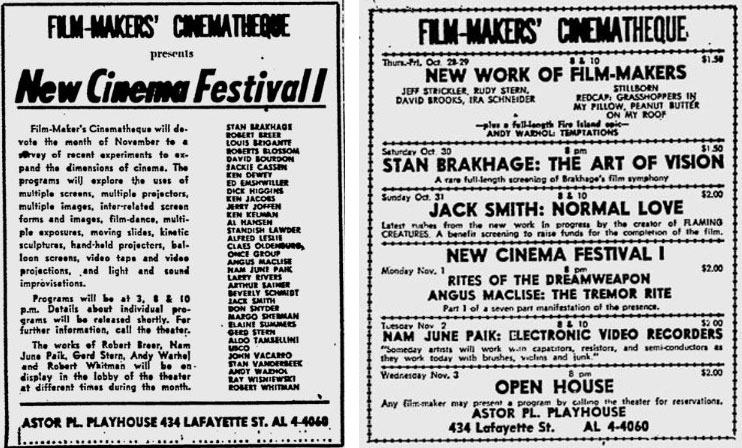 Mekas does not recall why the festival was billed as New Cinema Festival 1 in the Voice: "I do not remember how the New Cinema title was concocted for the ads, but it was probably done by John Brockman whom I had engaged at that time as Program Manager and who had his own ideas how to promote the series. Our ideas about it differed so much that I had to eventually let him go."
(Email from Jonas Mekas to Gary Comenas dated 3 February 2014)

A "SPECIAL ANNOUNCEMENT" that was sent out by the Film-Makers' Cinematheque "about a week or so before November 1st" when the festival was due to start, was headed "FESTIVAL OF EXPANDED CINEMA:" (Email from Jonas Mekas to Gary Comenas dated 3 February 2014) 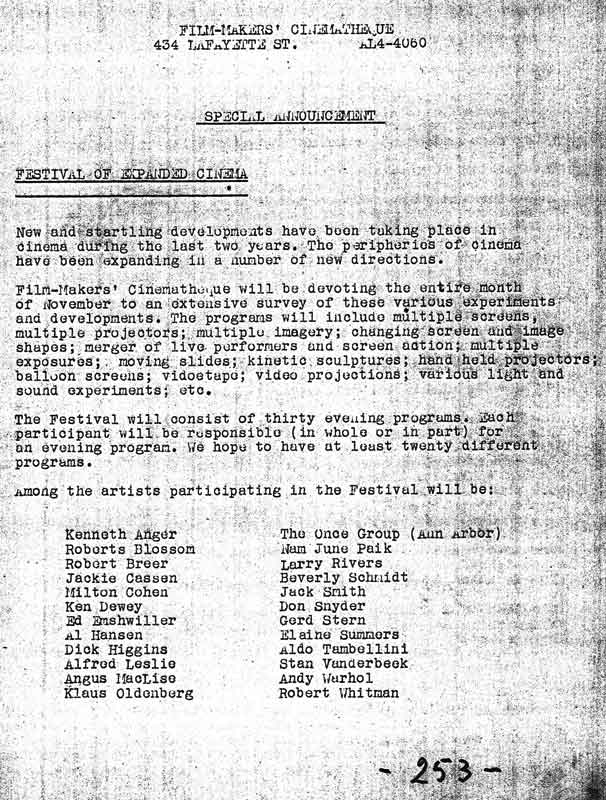 But a press release was also sent out where the festival was referred to as the "New Cinema Festival 1," giving Brockman as the main contact. 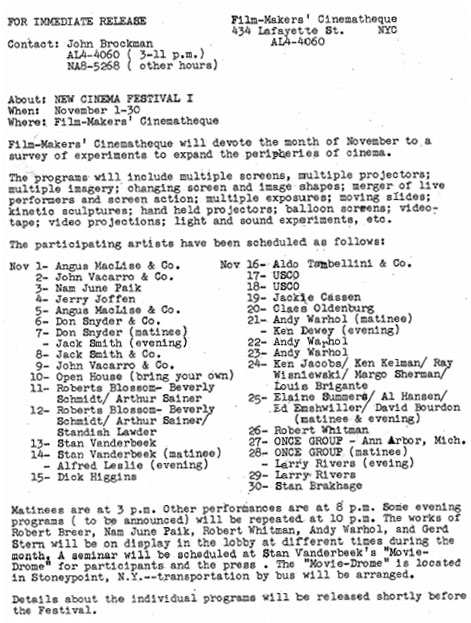 And yet, Brockman, himself, later referred to the festival as the "Expanded Cinema Festival" in his book, Digerati: Encounters with the Sober Elite (San Francisco: Hand Wired, 1996):

"The date was September 4, 1966. I was sitting on a park bench on Labor Day weekend in Easthampton, Long Island, reading about myself on the front page of The New York Times Sunday "Arts & Leisure Section." I was wondering if the article would get me fired from my job at the New York Film Festival at Lincoln Center, where I was producing "expanded cinema" events. I was twenty-five years old.

New and exciting ideas and forms of expression were in the air. They came out of happenings, the dance world, underground movies, avant-garde theater. They came from artists engaged in experiment. Intermedia consisted more often than not of nonscripted, sometimes spontaneous, theatrical events by artists in which the audience was also a participant.

I arrived at this spot after managing the Film-Makers' Cinematheque, the home for underground cinema in 1965, where my mandate had been to produce a festival that expanded the form of cinema. I commissioned thirty performance pieces by world class artists, dancers, poets, dramatists, and musicians. They were free to do anything they wanted, the only stipulation being that their piece incorporate cinema.

During the second half of the sixties, when I was spending anywhere from four to seven nights a week at the Film-Makers' Cinematheque, not only was a vast quantity of film discovered and shown, but a significant number of theatrical events were stages, many of them created by filmmakers and artists for performance occasions offered by Jonas Mekas.

The big event during that time, as I recall, was the Expanded Cinema Festival... What impressed me most - what has stayed in my memory most clearly - were the events, the 'theater pieces,' that in one way or another partook of the aesthetic of Jack Smith. These were either created by friends of Smith, with his influence clearly discernible, or ones in which he appeared and dominated the proceedings with the rhythm of his performance, or the single piece of his own presented at the Expanded Cinema Festival...

The single Smith theater event I viewed at the time took lace at the same Expanded Cinema Festival... The piece I saw had something to do with Atlantis - a favorite Smith theme." (DJ138-9)

Callie Angell also made reference to the Smith event in the first volume of the Andy Warhol film catalogue raisonné. In Andy Warhol Screen Tests: The Films of Andy Warhol Catalogue Raisonné (Vol. 1) (2006), she writes, "In Smith's later years, he worked primarily in theater and performance, a practice that began with Rehearsal for the Destruction of Atlantis, premiered at the Expanded Cinema Festival in New York in December 1965." (ST186)

The Smith event was actually performed in November, as per the 4 November 1965 Village Voice ad below. There were two ads for the festival in that issue of the Voice - one announcing the festival in general terms and the other giving a schedule of events during the first half of November. In both instances the festival was advertised as the New Cinema Festival 1. 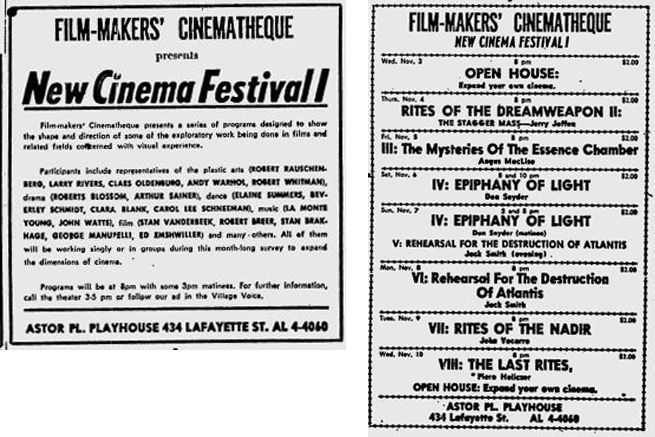 The script for the Smith event was also reproduced in the Spring 1966 issue Film Culture magazine with the notation that it was performed at the Film-Makers' Cinematheque on the 7th and 8th of November. (Film Culture, Spring 1966, No. 40 New York p. 13) 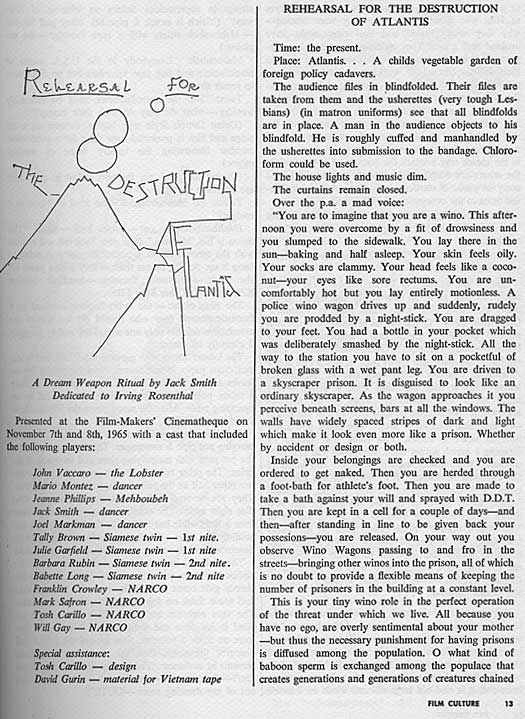 The first event of the festival, however, was "Rites of the Dreamweapon/Angus Maclise: The Tremor Rite" as per the 28 October 1965 ad reproduced at the beginning of this essay. Velvet Underground expert, Olivier Landemaine, presents more information about the first event, Rites of the Dreamweapon, in his online list of live performances and rehearsals of The Velvet Underground:

from "The Velvet Underground Live performances and rehearsals 1965-66" by Olivier Landemaine:

Program notes: for New Cinema Festival I. Rites of the Dreamweapon is a seven-part "Manifestation of the Presence" coordinated by Angus MacLise. Reproduced in Angus MacLise - Dreamweapon catalog (p. 20).

Sterling [Morrison]: "The antecedent of that [Exploding Plastic Inevitable] was done in the old Cinematheque - all done by film people - things which Angus called ritual happenings. 'Rites of the Dream Weapon' did you ever see a poster for that? Yes, that was the first one. Before Ken Kesey or anybody. Angus had seen lot of Dervish dancing while he was in India. He had been there for eight years and he came back with his raga scales and assortment of drums and so we used to put on these things and they had films. Piero Heliczer was involved in that." [in Fusion No. 28, March 6, 1970]. [See here:]

In this instance Landemaine indicates the performance was part of the "New Cinema I Festival." But in a description of the November 10th production of "The Last Rites," he identifies the festival as the "Expanded Cinema Festival."

from "The Velvet Underground Live performances and rehearsals 1965-66" by Olivier Landemaine:

A further schedule of events appeared in the 11 November 1965 issue of the Village Voice. This included the group USCO (as in 'Us Company' or 'Us Co.'), who were mentioned in David Bourdon's quote above. 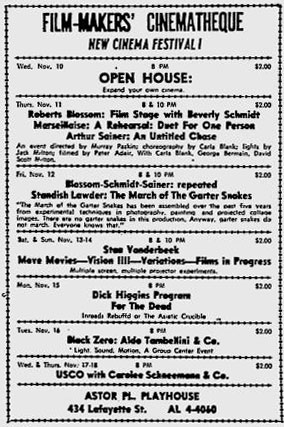 USCO's shows have been compared to Warhol's Exploding Plastic Inevitable show which featured the Velvet Underground. In the winter 2010 issue of Art Journal, Michael Oren claimed that USCO were a "key link" in the development of expanded cinema:

The USCO group, which combined the efforts of a poet, a painter, and an electronics innovator to produce immersive multimedia events, was based in an old church in the Hudson Valley but also performed in New York City, the San Francisco Bay Area, and at university campuses all across the United States. In the 1964-66 period of its most intense activity, the group projected slide and film collages, produced paintings that flashed and kinetic sculptures whose parts turned and scintillated or thrust up jets of water - all in an attempt to open audiences to nonlinear or even mystical experience... USCO was a countercultural effusion that also exhibited in major museums in the United States and Europe. It has been considered a key link in the development, variously, of 'expanded cinema' and 'visual music,' total environmental surrounds, and the internet.

Perhaps because of its association with Andy Warhol, the Exploding Plastic Inevitable (or Velvet Underground) has received the light of critical attention, while USCO has slipped into relative obscurity." [Pdf here.]

USCO was co-founded by Gerd Stern and Michael Callahan. When Stern played at the Rhode Island School of Design, the Stern performance was given a better review than the E.P.I. in the R.S.I.D. publication, Blockprint:

"I just thought the [E.P.I.] show generally lost from beginning to end. When they did hit on something good they kept it up to the verge of insanity, like Gerd Stern's tromp last year. (Personally, I found Gerd Stern more entertaining)."

In the same issue of the Voice as the above USCO ad, Jonas Mekas wrote about the first three programs of the New Cinema Festival. There was no use of the term "expanded cinema" in this particular column although he would use it in a later column.

"Not all that's happening at the Film-Makers' Cinematheque this month is or can be called cinema. Some of it has no name of any kind. The first three programs of the New Cinema Festival - the work of Angus McLise, Nam June Paik, and Jerry Joffen - dissolved the edges of this art called cinema into a frontiersland mystery. Light is there; motion is there; the screen is there; and the filmed image, very often, is there; but it cannot be described or experienced in terms you describe or experience the Griffith cinema, the Godard cinema, or even Brakhage cinema...

Now, this current gush, as much as one can generalize at this early (not so early, though) stage, is marked by an almost mystic drive towards pure motion, color, light experience. It has much to do with the other arts, painting, sculpture, happenings, environment, music, but the cinema aspects of light, screen (in a number of different forms), image (filmed or produced by other means), motion dominate these works. The surge is wide and intense.