Warhol's works which incorporated urine as an artistic medium are divided into two different categories - Oxidation Paintings and Piss Paintings - in the Andy Warhol Catalogue Raisonné. The Piss Paintings are described as works where "primed canvas had been stained with urine" in contrast to the Oxidation Paintings where "stained canvases were prepared with a metallic ground." Piss and Oxidation paintings found in Warhol's studio appear to be from 1977 to 1978, although the cat. rais. also makes reference to one which was illustrated in a magazine in 1976 and was among those found in Warhol's studio. It was a "Piss" rather than an "Oxidation" painting.

The Andy Warhol Catalogue Raisonné (Vol. 1) notes "In a little-known 1976 interview, when Warhol was asked if there were 'any old non-representational paintings that no one knows about,' he replied: 'The only ones I have are the piss paintings; I have a couple. That was a long time ago. Then there were the canvases that I used to leave on the street and people used to walk on them; in the end I had a lot of dirty canvases. Then I thought they were all diseased so I rolled them up and put them somewhere. Reproduced with this interview was an unstretched canvas, captioned 'Andy Warhol: Piss Painting, urine on canvas, 46 x 80, c. 1961.'" (RN469)

The footnote for the interview cites "Unmuzzled Ox 4.2 (1976), p. 44, illus. XI." Unmuzzled Ox was an alternative magazine of poetry, art, music and politics. The editor, Michael Andre maintains a blog here. A Yahoo group for the magazine can be found here. Contributors to the magazine included Allen Ginsberg, John Cage, Gerard Malanga, Gregory Corso and Jackie Curtis. Curtis' 8 page poem B-Girls was the longest poem in "The Poets' Encyclopedia" issue of the magazine, published in 1979. (See 1979: JACKIE CURTIS GETS PUBLISHED.) 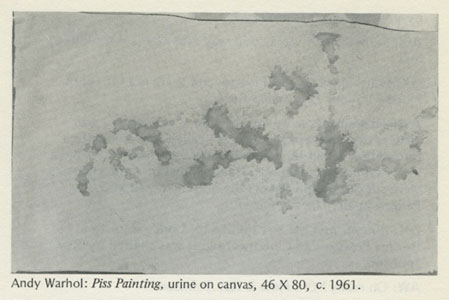 In regard to the illustration (reproduced above) accompanying the Warhol interview in Unmuzzled Ox, the cat. rais. explains that the work illustrated "can be identified among a group of works, found in the studio after Warhol's death, in which the primed canvas has been stained with urine. These are classified as the Piss Paintings and distinguished from the Oxidation Paintings, in which urine stained canvases were prepared with a metallic ground." (RN469)

Warhol may also have done some Piss Paintings in 1961 - 1962 although they have been lost. As noted in the cat. rais:

"Ronnie Cutrone, Warhol's assistant during the 1970s has recalled that Warhol showed him paintings with 'blue and red footprints' and at least one of the early Piss Paintings of 1961-62. The latter, Cutrone noted were 'rather small, like 40" x 50" or 30" x 40". But then we did some very big ones at the same time we did the Oxidation Paintings in 1978.' The painting [shown in the Unmuzzled Ox] measures 54 by 84 inches and surely belongs to the later body of work." (RN469)

The cat. rais. continues, "it is difficult, in fact, to identify any of the early Piss Paintings, even among the smaller works. All of the urine-stained works from the studio - on metallic backgrounds or not, stretched or unstretched - appear to have been made on the same kind of linen, suggesting that they were all made at the same time in 1977 - 1978. In Exposures (1979), Warhol himself cast some doubt on these early works: 'The last time I saw Dali in New York he was so nice... I told him that I was doing piss paintings. And he said Pier Paolo Pasolini had an artist pissing on a painting years ago in his movie Teorama. I lied and said I did mine before that." (RN469)

Warhol's quote from Exposures, however, should be taken with a pinch of salt. Bob Colacello, who ghost-wrote Exposures, recalls "I hated the fact that I was ghostwriting again, that every time I typed 'I' it was Andy, not me. When I'd worked on the Philosophy book that had seemed liberating, but now it felt humiliating, especially since the stories 'I' was telling were mine, not Andy's. In some cases, I put Andy at scenes where only I had been. It was a form of lying... When we began the process as usual, by taping, he contributed a line or two for every ten or twelve of mine. 'Just make it up' was his literary motto..." (BC418-19)

One of the people that urinated on the 1970s canvases was Halston's boyfriend, Victor Hugo. According to Paul Alexander in Death and Disaster, The Rise of the Warhol Empire and the Race for Andy's Millions, "Rum or had it that Warhol chose Hugo to do the urinating because Hugo had an unusually large bladder, not to mention an unusually large penis, which was why, Andy slyly speculated to friends, Hugo was the lover of his friend Halston. When Hugo peed on a canvas, his urine reacted with a chemical compound that had been painted on the canvas, creating a mass of lines and squiggles." (DD46)

According to Victor Bockris, the Oxidation paintings were created when Victor Hugo, Ronnie Cutrone and Walter Steding took turns pissing on canvases coated with wet copper paint, which would oxidize and turn orange and green when it was pissed on. Unfortunately, according to Bockris, "the Oxidation paintings retained the lingering odour of their main ingredient." Vincent Fremont recalled "Andy was taking a lot of B vitamins... and during that whole period the back room stank of piss." (L&D419)

"Did Andy ever use his own urine? My diary shows that when he first began the series in December 1977, he did - I didn't witness the act of creation, he referred to it in passing. But he soon turned to Victor and Ronnie, as usual preferring to have others do the repetitive technical work for him. And there were many others: boys who'd come to lunch and drink too much wine, and find it funny or even flattering to be asked to help Andy 'paint'. Andy always had a little extra bounce in his walk as he led them to his studio... Victor [Hugo] was showing up with ever larger numbers of 'assistants', hired by the hour at the Everard and St. Marks Baths." (BC343)

A possible inspiration for the piss paintings was the popularity of watersports among sections of the gay community.

"By 1977, Manhattan boasted at least a dozen thriving gay bathhouses, although they were considered a bit passé compared to the backroom bars of the far West Village... The Anvil was famous for its fist-fucking stage show. The Toilet featured tubs and troughs where naked men lay for other naked men to urinate on them... Andy only went to the Anvil once, as far as I know, and he never went to the Toilet, though he also once went to the Eagle's Nest... where he was fascinated, he told me, by a man who urinated in an empty beer bottle and left it on the bar for someone else to to drink. 'They were all fighting over it,' he said. 'It was so abstract.'" (BC341)

According to Bockris, "The Piss Paintings were "surprisingly well received when they were displayed in Europe the following year. One critic hailed them as 'Warhol at his purest', drawing historical references to Jackson Pollock's legendary emission into Peggy Guggenheim's fireplace." (L&D)

"I'm pretty sure that the Piss Paintings idea came from friends telling him about what went on at the Toilet, reinforced perhaps by the punks peeing at his Paris opening. He was also aware of the scene in the 1968 Pasolini movie, Teorema, where an aspiring artist pisses on is paintings. 'It's a parody of Jackson Pollock,' he told me, referring to rumours that Pollock would urinate on a canvas before delivering it to a dealer or client he didn't like. Andy liked his work to have art-historical references, though if you brought it up, he would pretend he didn't know what you were talking about... Nonetheless, the true muse of Andy's sexual works in 1977-78 was Victor Hugo." (BC342)