DAVID WEISMAN, OSCAR NOMINATED PRODUCER OF
KISS OF THE SPIDER WOMAN, DIES AT 77 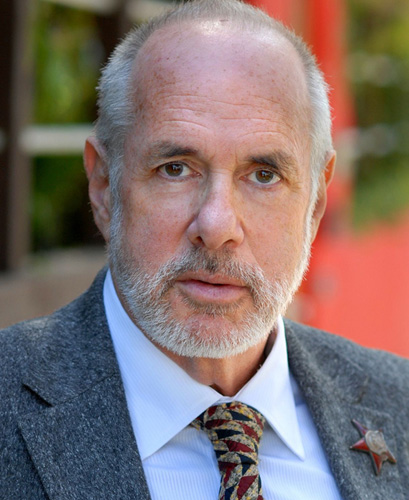 David Weisman, Oscar-nominated producer of Kiss of the Spider Woman and accomplished graphic artist, died on October 9, 2019 at the age of 77 at Cedars Sinai Hospital in Los Angeles due to complications from neuroinvasive West Nile virus.

Born in Binghamton, New York, on March 11, 1942, Weisman attended Syracuse University's School of Fine Arts in the early 1960’s. Inspired by the classic Italian film La Dolce Vita, and armed with a gift for languages, Weisman dropped out of college to design film-posters in Rome, where he managed to meet Federico Fellini, for whom he created a poster for 8 1/2 (Otto e mezzo). Returning to New York, Weisman was hired by Otto Preminger to create the title sequence for Hurry Sundown and then became Preminger’s assistant on the film. Weisman also designed the key art for The Boys in the Band, among many others.

In 1967, with a splinter-group from Andy Warhol’s Factory, Weisman began the five year long production of the “aboveground-underground” cult classic Ciao! Manhattan, which he co-wrote and co-directed with Warhol alumnus John Palmer.  A "chronicle-à-clef" about sixties-icon Edie Sedgwick, the film features Sedgwick, Roger Vadim and Factory luminaries Brigid Berlin, Viva and Paul America. Weisman then worked as associate director on Nelson Lyon’s avant-garde film The Telephone Book and created an English-language film edited from a series of Japanese samurai-movies, which was successfully released as Shogun Assassin by Roger Corman’s New World Pictures.

Weisman's long collaboration with Leonard Schrader began on The Killing of America, a feature documentary about the evolution of U.S. violence which David wrote with Leonard and Chieko Schrader.. Schrader's background in Latin American literature and Weisman's familiarity with South America from his many travels prompted them to look for a film project they could make below the equator.  In 1982, using his proceeds from a re-release of Ciao! Manhattan, Weisman acquired the screen rights to Manuel Puig's Kiss of the Spider Woman and developed the screenplay with Schrader.  They began pre-production on the film with Burt Lancaster, Raul Julia and Sonia Braga in the lead roles, but in October 1983, as director Hector Babenco commenced filming in São Paulo, Brazil, William Hurt replaced an ailing Lancaster.

When Babenco himself suffered a health crisis in 1984, Weisman completed the film's editing with Schrader.  Post-production took an arduous fourteen months, much of it, for lack of funds, done in Weisman's Los Angeles home.  He was obliged to re-dub most of the film's dialogue, re-cut the negative and mix the soundtrack twice, before Kiss of the Spider Woman was accepted as an Official Selection In Competition at the 1985 Cannes Film Festival, where William Hurt won the Best Actor award.

The film, released that fall by independent distributor Island Alive, broke box office records in New York and went on to gross nearly $18 million, at that time an unheard of sum for an independent film title.  The film received Oscar nominations for Best Picture (the first independently released film to do so), Best Director, Best Adapted Screenplay and the 1986 Oscar for Best Actor went to William Hurt. In many ways, Kiss of the Spider Woman opened the door for the American Independent Film movement that followed.

David spent a great deal of the 90’s conducting new interviews with friends, colleagues,and fans of Edie Sedgwick, in preparation for a documentary on her, due to her steady and growing popularity as a symbol of the turbulent 1960’s. In 2006, he co-authored a book with Melissa Painter for Chronicle Books about Edie called Edie: Girl on Fire. He recently won a lawsuit giving him the publicity rights to Sedgwick’s name and likeness.

In recent years he developed several projects withPaul Schrader; one entitled “Little K,” based on a best-selling book by Adrienne Sharp, about a pre-revolutionary prima ballerina at the Bolshoi who had an infamous affair with Czar Nicholas II. Another, entitled “Xtreme City,”  is a Hollywood-Bollywood fusion film which he developed with Shahrukh Khan. With collaborator Caleb Mann, he had also developed a streaming series, “Space Brothers,” based on a popular Japanese manga by the same name.

A memorial celebration is in the planning stages under the guidance of Weisman’s  co-executors Chase Mellen III and Jim Thompson. Donations in Weisman’s memory can be made to: Savetigersnow.org,  which is a joint effort of the World Wildlife Fund and the Leonardo DiCaprio Foundation.