After The Chelsea Girls run at the Cinematheque, it re-opened at a commercial cinema and continued to be screened in New York for most of 1966 and 1967. During that time it was also shown internationally - in Berlin in 1967, and a private screening took place in London the same year at the flat of the London art dealer, Robert Fraser. (Fraser was arrested with Mick Jagger for possession of drugs in 1967 and appears with Jagger in Richard Hamilton's painting, Swingeing London 67.)

The first public screening of the film in the U.K. took place the following year at the The New Cinema Club in London, in 1968. That version of the film was considerably shorter than the original and was presented on a single screen. It was heavily edited and lasted about 120 minutes. Later in 1968, a version advertised as "uncut" was shown for 8 nights in August and September at the Art Labs in London.

Some of the most controversial scenes in the The Chelsea Girls involved drug injecting. Warhol wasn't a stranger to the subject of drug abuse. He had won an Art Directors Club Medal in 1952 for illustrations he did for "The Nation's Nightmare," a CBS radio programme about drug addiction in 1951 that was also released as an album. His drawings included graphic illustrations of man shooting up. Warhol would have also been familiar with Shirley Clarke's 1961 movie, The Connection - a filmed version of a Living Theatre production in which the actors, some of whom were real junkies, waited for their drug connection to arrive. Clarke was part of the New American Cinema Group, founded by Jonas Mekas who distributed her film. Mekas also distributed Warhol's films. 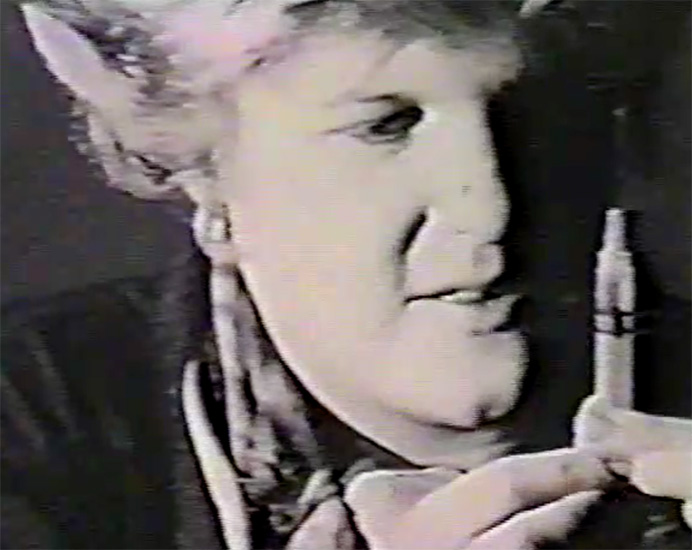 Brigid Berlin prepares her syringe in The Chelsea Girls

Warhol's method of screening the film was later picked up by Hollywood with the split screen effect used for films such as Thomas Crown Affair or The Boston Strangler. But whereas those films were divided into two (or more) spaces on one strip of film, The Chelsea Girls consisted of two separate film strips, projected by two separate projectors, according to the screening instructions which indicated which side of the screen should be silent or audible, as per below. (See also 'Jonas Mekas and the Film-Makers' Cinematheque," p. 3, here.) 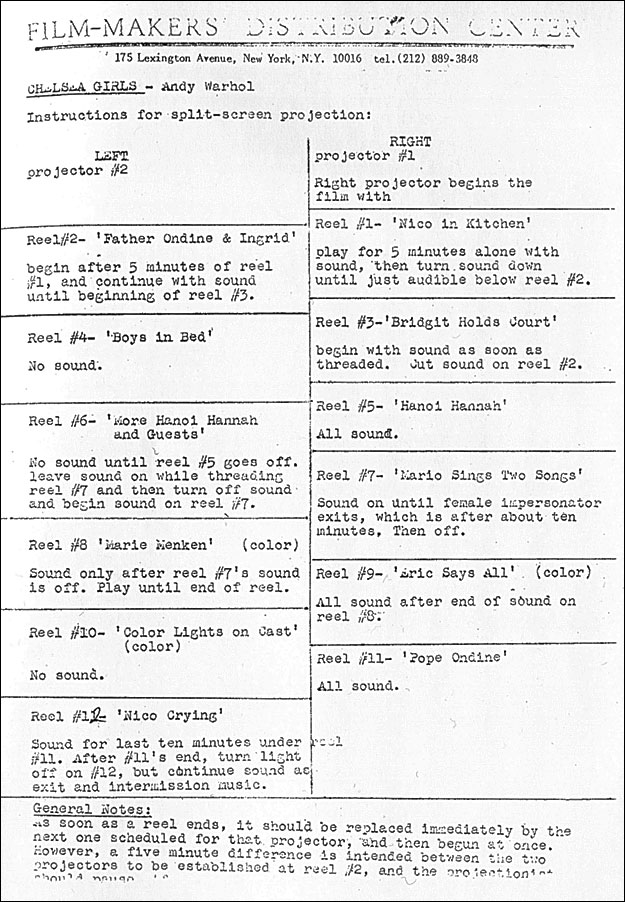 The FDC's original screening instructions for The Chelsea Girls

The Village Voice ads that announced the premiere of the film indicated which sequences were shot in which rooms, but the numbers were fake and later removed when the hotel threatened legal action. 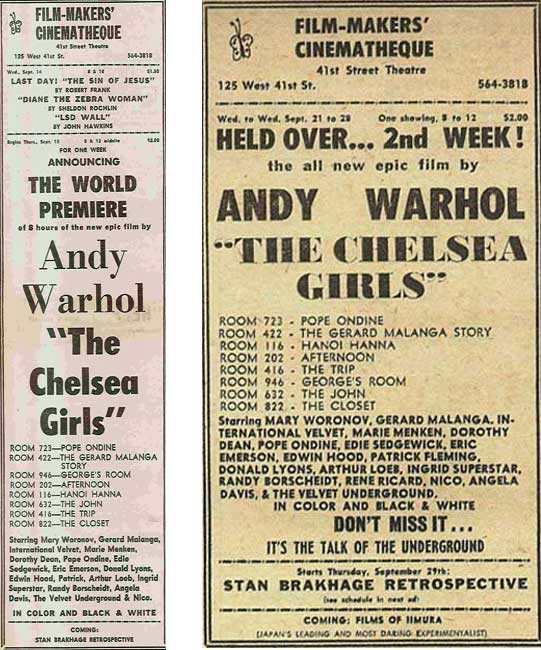 L: Village Voice ad, 15 September 1966, announcing premiere of The Chelsea Girls at the Cinematheque when it was at the 41st Theatre/R: Village Voice ad, 22 September 1966, holding the film over for an additional week after it opened (reproduced in The Inevitable World of the Velvet Underground, here and "Andy Warhol Films: Newspaper Advertisements 1965 - 1970," here.)

The ads included "Edie Sedewick" [sic] amongst the original cast but her footage would be cut from the film. According to Paul Morrissey, Edie asked for her footage in "The Afternoon" segment to be taken out of The Chelsea Girls, saying that she was under contract to Bob Dylan's manager, Albert Grossman. (EDIE283) Earlier in the year, in about February 1966, she left the Factory after an argument with Warhol at either the Ginger Man restaurant (according to Warhol biographer Victor Bockris) or Maxwell Plum (according to Gerard Malanga). She had become increasingly demanding about money, was angry that she wasn't being included in the Velvet Underground and felt that people in New York were laughing at her in Warhol's films.

Also cut from The Chelsea Girls was Nico's footage with Randy Borscheidt ("The Closet") which was later released as a separate film. However, both Edie's segment and Nico's segment are listed as part of The Chelsea Girls in the The American Film Institute Catalog of Motion Pictures, 1961 - 1970:

As noted on the ads, the Film-makers' Cinematheque was on 41st Street at the time that The Chelsea Girls opened there. (There were two entrances to the building - one at 125 West 41st Street and at 120 West 42nd Street. Later, Jonas Mekas would call the same theatre the 42nd Street Theatre and then re-name it again as the New Cinema Playhouse.) (See "Jonas Mekas and the Filmmakers' Cinematheque," p. 4 here.)

On December 1st, The Chelsea Girls moved to the Cinema Rendezvous: 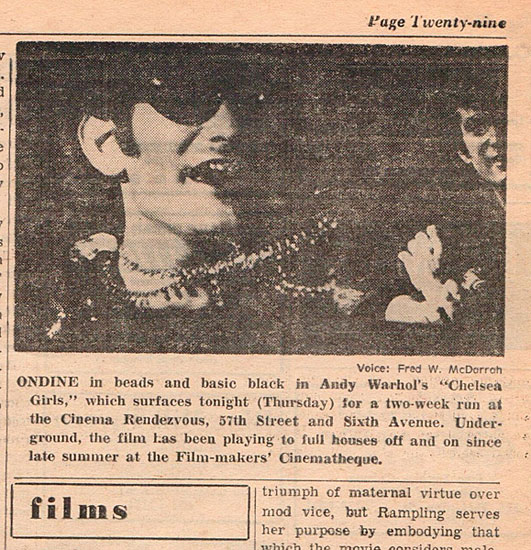 The significance of the move to the Cinema Rendezvous did not go unnoticed. Marjorie Holt wrote in The Cornell Daily Sun, "Underground as an all-inclusive term for the independent film movement has long been passé, but with the recent opening of Andy Warhol's The Chelsea Girls at the Cinema-Rendezvous, an uptown New York art theatre as expensive as its name, all pretensions to the image of the undiscovered, independent artist disappears." (MHO)

On December 11, 1966, Elenore Lester wrote in the New York Times, "When the film came out last September, hip critics on the weeklies hailed Andy as a cross between D. W. Griffith and the Marquis de Sade. Victor Hugo and Joyce were also mentioned... And that is how Andy's epic came to be the first Underground film to leave the coterie atmosphere of the Cinemathéque, 41st Street basement showcase of the non-commercial filmmakers, and come up to 57th Street to the plush Cinema Rendezvous to titillate the uptown types with visions of rampant homosexuality, drug addition, nudity and blasphemy."

Brian Holt wrote in Art and Artists magazine (London): "The very appearance of Chelsea Girls overground is itself remarkable, for it pressured its way upward from an extended showing at the Cinemathéque on West 41st Street - the centre of the underground establishment - to a bona fide first-run house at the slightly higher than usual price of $3 (1 guinea) per person." (BHO)

(Art and Artists was the London-based art magazine founded by Brooklyn-born Mario Amaya. Amaya was with Warhol when the artist was shot by Valerie Solanas and was also wounded by one of Solanas' bullets. (See "Valerie Solanas," here.))

By the December 22nd issue of the Village Voice, The Chelsea Girls had moved to the Regency Theatre. 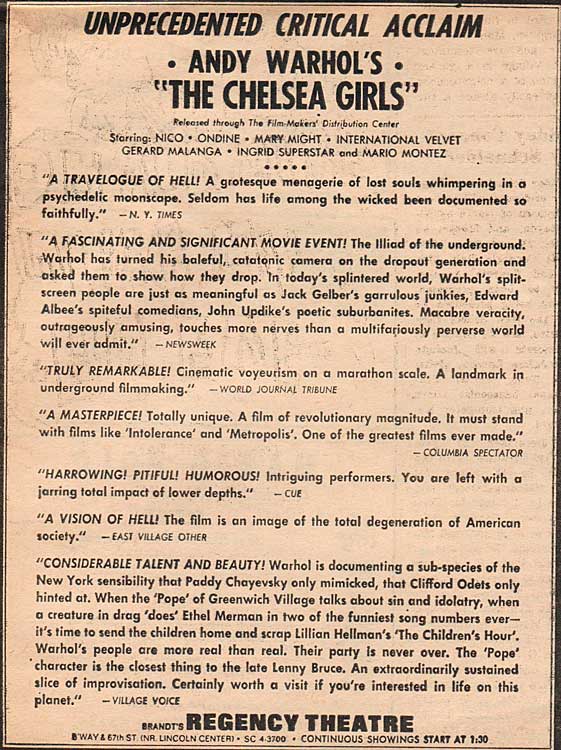 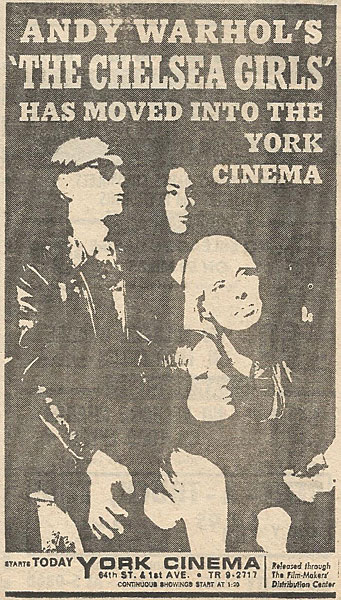 On March 22nd the film opened at the Cinema Theatre at 1122 N. Western in Los Angeles for it's "1st West Coast showing." Warhol was in town to promote the film and gave a series of interviews on Monday, March 20 prior to the film opening. (Oliver Johnson, "An L.A. Weekend with Andy Warhol," Los Angeles Free Press, March 24, 1967)

In New York, the "last week" of the run at the York was advertised in the April 6, 1967 issue of the Village Voice: 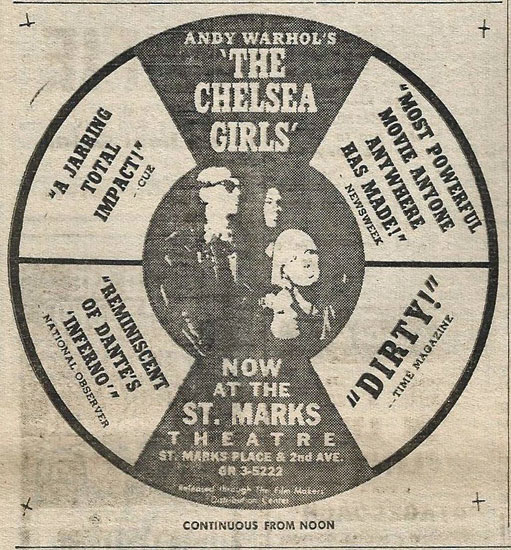 While The Chelsea Girls was still being shown at the St. Marks Theatre, Warhol and his entourage took a print to the 20th Annual Cannes Film Festival.