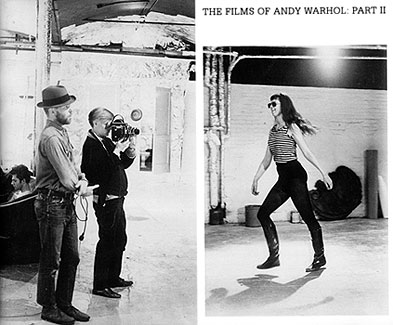 Dancer and writer Jill Johnston died Saturday, September 18, 2010 from complications from a stroke she suffered earlier in the month. She lived with her partner, Ingrid Nyeboe, in northwestern Connecticut and died at Hartford Hospital.

As a regular columnist since 1959 with the Village Voice newspaper, Johnston covered (and sometimes performed in) many of the seminal dance and performance events of the 60s - including the Pocket Follies in 1963 which also included Freddy Herko, Ray Johnson, Yvonne Rainer and Robert Rauschenberg. In 1964 Warhol filmed her for Jill Johnston Dancing - a series of short films of Jill improvising in the newly silvered Factory.

"...I wrote in a farewell column that I was a luxury that the women's movement could not yet afford and I didn't know how true it was and still is apparently even among lesbians I'm a luxurious writer passing off a middle class self indulgence as a women's language or beginnings of a new women's culture. Actually I'm not middle class at. I'm a british bastard, and there's a long tradition of aristocracy in the line of british bastardy, so that could account for all my errudishin and disarming dishonesty and pretensions in general."

Reva Wolf to moderate a panel discussion in conjunction with "Andy Warhol: Private and Public in 151 Photographs"

Reva Wolf will be hosting a panel discussion at SUNY, New Paltz on September 23, 2010. Wolf is the author of one of the more interesting books to be published on Warhol - Andy Warhol, Poetry, and Gossip in the 1960s - which looks at the connections between Warhol's work and the poetry/cafe movement of the 60s in New York as well as the mimeographed underground publications at the time. The panel discussion will focus on Warhol's photographic legacy. More than 150 Warhol photographs were recently donated to the museum by the Andy Warhol Foundation for the Visual Arts and are currently being exhibited at the Sara Bedrick Gallery at SUNY.

Panelists participating in the discussion of "Warhol's Photography as Art and Life" include Jenny Moore (project curator, Warhol Photographic Legacy Program); Neil Printz (co-author, catalogue raisonné of Warhol's paintings and sculpture); and Shelley Rice (photography critic and historian, and Arts Professor, New York University). The event, which is free and open to the public, will take place in the auditorium of the Coykendall Science Building (CSB) at the State University of New York (SUNY) at New Paltz, beginning at 6 pm on the 23rd.

Ronald Tavel: Mary Woronov "made my play Kitchenette her own; and is the actress most associated with my name." (2/10/08)

Warhol star Mary Woronov is starring in a new film version of Ronald Tavel's play Kitchenette which will be shown at The Standard on Sunset Blvd. in West Hollywood on September 14. Mary will be there in person to talk about the new film as well as what it was like being in the original production. Mary played "Jo" in the original production, with Ron's brother, Harvey, playing the role of "filmmaker." In the new film version, Tony Abatemarco (pictured above) is appearing with Mary.

The event is scheduled to take place from 7-9 pm on Sept. 14 at The Standard, 8300 Sunset Blvd., West Hollywood. Free admission. Not to be missed.

An interview with the first door person at Max's, Abigail Rosen (now Abigail McGrath), who also starred with Viva in Tub Girls, can be read at: here.

Paul Morrissey's new film, News from Nowhere, will have its world premiere at the Venice Film Festival on September 10, 2010, followed by an additional screening on the 11th.

As described on his website, the film "is intentionally meant to return to the style not just of the director’s earlier work but to the type of films made in Europe in the 1960s and 70s." Included in the cast is Warhol star, Viva Hoffman.

Morrissey directed numerous films which are often attributed to Warhol including Flesh, Trash and Women in Revolt. The films he made after leaving Warhol's studio include Madame Wang's, Mixed Blood and Spike of Bensonhurst.

On Saturday evening from 7 – 9 pm, Roger Zahab and friends will perform the musical works of Marcel Duchamp, and selected pieces by John Cage as part of the symposium. 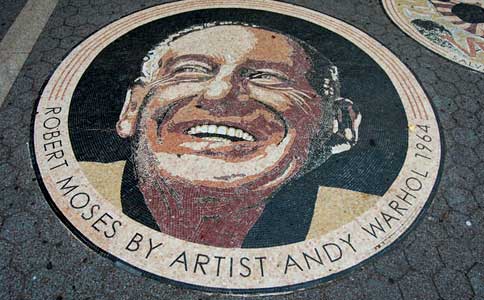 WYNC in New York is running a story on art blogger Andrew Russeth's discovery of a mosaic commemorating Andy Warhol's depiction of Robert Moses during the 1964 Worlds Fair in Queens. Warhol was asked to do a mural for New York State Pavilion at the fair and he painted his Most Wanted Men series on the front of the building. Unfortunately, however, there were objections as he had used the images of real men from the FBI's "Most Wanted" list. He ended up covering the images with silver paint after suggesting unsuccessfully that he replace the criminals' images with one of the fair's organizer, Robert Moses. In POPism Warhol is quoted as saying that because his Most Wanted mural had ultimately been rejected, he did "a picture of Robert Moses, instead, who was running the fair - a few dozen four-foot squares of Masonite panels - but that got rejected too." (POP72) The mosaic pictured above was installed in 1998. 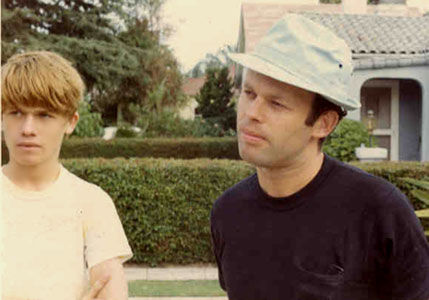 Warhol star Mark Lancaster is mentioned in the new E.M. Forster biography, A Great Unrecorded History: A New Life of E. M. Forster, by Wendy Moffat. Lancaster's photographs of Forster are also included in the book which, according to a recent Time magazine review is the first Forster biography "to be ordered around his cloistered homosexuality."

From "A New Look at E.M. Forster's 'Undeveloped Heart'" By Eric Banks:

"Wendy Moffat pulls out another social yardstick: a schoolboy when Oscar Wilde was imprisoned for 'gross indecency,' Forster witnessed the telecast of the first moon landing with his friend Christopher Isherwood in the studio of Mark Lancaster, a former Warhol Factory hand who was one of two men shown lock-lipped in the Pop artist's 1964 film Kiss. (Watching Neil Armstrong step onto the lunar surface, Forster muttered, 'I don't think they should be doing that.')"

The Warholstars interview with Mark Lancaster is here.

Warhol Live in Nashville in 2011 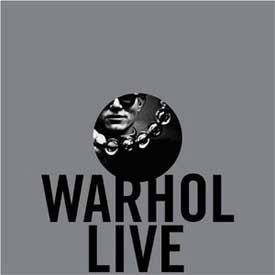 The Frist Center for the Visual Arts in Nashville will be hosting the Warhol Live exhibition from June 24 - September 11, 2011. The exhibition focuses on Warhol's relationship to music and dance. Warhol was a member of Carnegie Tech's modern dance group and one of his early shows in New York was an exhibition of drawings of the dancer John Butler at the Loft Gallery in 1954. The films that Warhol made of dancers during the 60s included Jill Johnston Dancing, Paul Swan ("the most beautiful man in the world") and the Freddy Herko films. Warhol was also known to have attended events at the Judson Church during the 60s - home to the Judson Dance Theater.

The exhibition catalogue (pictured above) includes essays on Warhol and rock n' roll (by the chief archivist for The Warhol museum, Matt Wrbican), the Exploding Plastic Inevitable (once called the "Erupting" Plastic Inevitable), John Cage and Merce Cunningham (who used Warhol's Silver Clouds as part of the set for RainForest) as well as an essay on Interview magazine and Warhol's television work. The show previously traveled to Montreal and San Francisco - in addition to having been shown at The Warhol museum last year.

Sold Out at Olyvia Fine Art in London

Olyvia Fine Art in London will be showing work by Andy Warhol, Robert Rauschenberg, Tom Wesselmann, Keith Haring, Robert Longo and Frank Stella in a show titled " Sold Out: American Pop Art from the 1970s to the 1980s" from September 22 to November 20, 2010.

An article on Maxime de la Falaise appeared in the New York Times last month which detailed her and her husband's "friendship" with the photographer Robert Mapplethorpe - a friendship which soured after Maxime's husband had an affair with Mapplethorpe.

Maxime was a friend of Warhol and appeared in some of his video projects such as Phoney and Nothing Serious, as well as in the film Dracula directed by Paul Morrissey. Her son Alexis (who died of lung cancer in 2004) appeared in Warhol's Tub Girls with Viva, Brigid Berlin and Abigail Rosen. Maxime died last year. (See "Maxime de la Falaise dies.")

"In the early 1970s, Robert Mapplethorpe gave Maxime de la Falaise McKendry and her husband, John, the gift of a box he had made, à la Joseph Cornell, that held a doll with two smaller ones in its stomach... Mapplethorpe was unknown at the time, but the lavishly well-connected McKendrys were doing everything they could to launch him... The couple invited Mapplethorpe to the high-boho dinner parties they gave in their apartment at 190 Riverside Drive, where he met the Erteguns, the Kempners — people who could help. The rest is history, including how badly it all ended between the artist and his patrons. After John McKendry’s messy one-way love affair with his protégé, he fell out of a window, out of his mind on drugs, trying to touch the moon. He survived, but drink killed him in 1975. The wreckage complete, Maxime said she “detested” Mapplethorpe, according to his biographer, Patricia Morrisroe."

The full article can be found here.

"The Big Picture: Abstract Expressionist New York" opens at the Museum of Modern Art in New York on October 3rd and continues until April 25, 2011. Included in show will be work by Robert Motherwell, Jackson Pollock, Barnett Newman, Willem de Kooning, Mark Rothko, Lee Krasner, David Smith and others. A new publication, Abstract Expressionism at The Museum of Modern Art

, will be published in conjunction with the show.

The first show of sculpture by David Bailey will open on September 8th at the Pangolin Gallery in London. The show will include his sculpture "Dead Andy." In addition to photographing models like Jean Shrimpton, Twiggy and Penelope Tree in the 60s, Bailey made a controversial documentary on Warhol in 1973.

An interview with Bailey can be found here.

"Quite recently, David Bailey decided to make a sculpture of his old friend Andy Warhol. In his studio on Dartmoor, he took a tin can, filled it with beans and then took some more beans to sculpt into the semblance of Warhol's head. The idea was that the head would seem to spew from the tin, and the resultant sculpture was to be called Dead Andy. Bailey capped the bean head with a blue-rinsed approximation of Warhol's hairdo and covered the lot in plaster. Then, like a Nigella of sculpture, he left it to set.

'I thought I knew what I was doing,' says one of the world's most illustrious photographers. 'But when I got up in the morning, the thing had exploded. Total fucking disaster, plaster everywhere.'

'Dried beans, the ones you soak overnight, just expand in those conditions,' says Bailey's wife, Catherine.

'That's right!' says Bailey. 'So I did it again it, but this time with sweets.'

'Jelly beans,' explains Catherine. 'They're about the size of baked beans.'

And, of course, they don't detonate overnight. Bailey cackles like Dudley Moore, and reaches for another fag..."

A selection of the works in the show can be found here.