Model, designer, Vogue columnist and friend of Warhol, Maxime de la Falaise (aka Maxime McKendry) died on Thursday, April 30, 2009 at her home in Saint-Rémy-de-Provence, France of "natural causes" according to her daughter Lou Lou.

Warhol shot footage at Maxime de la Falaise's home for his video project Phoney. Originally the idea, according to past Interview editor Bob Colacello, was to have "celebrities come to dinner to talk about their new projects, while the regulars fought." (BC141) Susan Blond who worked for Interview's director of advertising Sandy Brant, recalls "The best part of my job was being in that video soap opera that Andy was making up at Maxime de la Falaise's with Candy Darling and Geri Miller. It was called Phonies." (BC140) Although Phoney was never broadcast as a television series, Colacello recalls that it was at Falaise's real dinner parties, not the one ones they videotaped for the conceived series, that he and Andy and Fred Hughes "got closer to many of the starts of the seventies and eighties."(BC142)

Michael Alig's prison sentence extended due to drug use

An interview with Michael Alig can be found on You Tube here.

According to Steve Lewis who is doing a blog about his visits to his 'friend' Michael Alig, Alig's prison sentence has been extended due to the presence of Percocet in his blood. Club kid Alig has so far served 13 years for the murder of Angel Melendez which was the subject of the film Party Monster. According to Lewis, Alig's "real partner in crime, Freeze, is due out next March," but "Michael received four years tacked onto his sentence for what has been described to me as a minor infraction... He is not taking this well, and I fear the worst."

On Saturday, April 25, 2009 a brush fire destroyed James Rosenquist's studio in Florida and several of the artist's works including a large mural commissioned by the government of France - as well as two homes and an office owned by Rosenquist. The fire has been called "suspicious" by the firefighters and its cause is currently being investigated.

An interview with Gerard Malanga about his photographic work has appeared on the Smithsonian website here.

The Museum of Modern Art in New York will be screening a series of films by Andy Warhol in conjunction with the exhibition "Into the Sunset: Photography's Image of the American West" and their film series "The Old West: Myth, Character, and Reinvention." Films to be shown include Lonesome Cowboys, Imitation of Christ, Sunset (featuring the voice of Nico), Elvis at Ferus, Tarzan and Jane Regained, Sort of... and Horse.

An article by J. Hoberman about the Warhol film series can be found in the Village Voice here.

Cash for your Warhol (not) 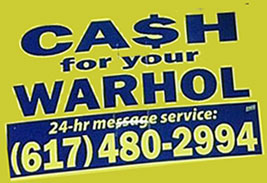 The site and signs are actually "art" by Geoff Hargadon, inspired by the "Cash for Your House" signs that are proliferating in the U.S. because of the economic downturn. Hargadon commissioned his signs from one of the same companies who do the "House" signs. Previous work by Hargadon includes miniature, homemade versions of Christo and Jean-Claude's The Gates.

Mark Ravenhill, author of the award-winning play Shopping and Fucking, has reviewed Krystian Lupa's Marilyn - inspired by Warhol's Marilyn - in a recent article of the Guardian newspaper in the U.K. which also makes reference to Lupa's production of Factory 2.

Ravenhill's article can be found here.

Andy Warhol's Last Supper to be auctioned at Christie's

One of Andy Warhol's Last Supper paintings, measuring more than 10 feet long, is to be auctioned at Christie's Post-Warhol and Contemporary Art Sale on May 13, 2009. The sale will also feature work by Jean-Michel Basquiat, Roy Lichtenstein and Claes Oldenburg as well as Abstract Expressionist artists Jackson Pollock, and Willem de Kooning.

Art dealer Anthony d'Offay has claimed that the Warhol Self-Portraits were his idea in a recent interview in The Telegraph newspaper in the U.K.

"In 1986, he [d'Offay] did a show with Warhol, shortly before the American artist's death. 'Andy said, 'You think of a subject', d'Offay recalls. 'I commissioned him to do a series of self-portraits. Recently, important ones have cost up to $10 million. They were my idea.' What was Warhol like? 'Extremely shy, very monosyllabic. Everything was 'just great', but what he was actually thinking was difficult to gauge. The only time he really came alive was when he was taking someone's portrait with his Polaroid camera.'"

The full article can be read at here.