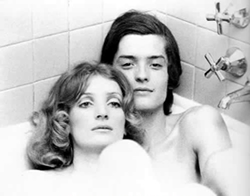 Tub Girls consisted of six reels of Viva in a bathtub with various people. Brigid Berlin (Polk) bathed fully clothed in the film.

The footage from Tub Girls was also part of the full length version of **** (or the 25 hour movie). (BN112) Dick Preston in the East Village Other referred to the Tub Girls footage in his review of **** (Four Stars) :

"The avant garde, spearheaded (in this context) by Instant Andy Warhol in his 25 hour marathon film "****" at the New Cinema Playhouse, gives us all the variations and deviations but stops short of anyone actually whopping it it...

The general rule for me seemed to be the greater the heterosexual activity the more closely my voyeuristic eye following the action. Among the sequences which appealed to me was a very white Viva bathing in a glass bath (set in the middle of a black and white chequered floor) with a dark skinned girl of infinite charm and beauty... Viva making love in the bath (there were at least six different bath sequences) with a young man to whom she hardly said a word..."

The "dark skinned girl of infinite charm and beauty" was presumably Abigail Rosen who was the first door person at Max's Kansas City and is still involved in the arts. An interview with her can be found here.

"At first Mickey [Ruskin] hired me as the coat-check girl, but it was on the second floor and we were schlepping coats from downstairs to upstairs, and taking them back down where the people wanted to leave. It was not a good plan, besides which people would go up and steal coats. So we abandoned the whole idea and I became the door lady with Bob Russell. The embarrassing times were when Mickey asked us to kick somebody out. The philosophy behind it was that no one would beat on or abuse a woman.

I was asked one night to kick Stanley Kubrick out. He was drunk and obnoxious and neither Mickey or I knew who he was. I said, 'Sir, I think it's time for you to leave now, you're not going to be happy here.' And he left. Then Mickey found out the next day who we had kicked out, and he yelled at me for not recognizing him. 'That's why I have you here,' he said, 'you're supposed to know who these people are.'" (HR34-5)

Tub Girls is rarely shown and isn't even listed in many filmographies of Andy Warhol. However, one Warholstars site user once saw it at a screening at the Museum of Modern Art in Stockholm, Sweden. She thought it was "quite poignant, at least the scene with the two women [Viva and Abigail Rosen] was." 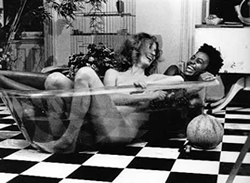