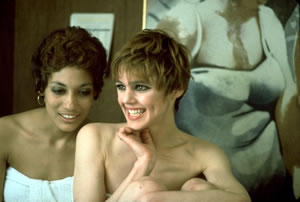 "This film began as an experiment - one that turned into an odyssey and finally wound up as a lifestyle for five years. It began in the Spring of 1967 when a splinter group which had worked with the Warhol Factory gravitated at my house on 336 East 43rd Street in Manhattan where I used to live and we decided to do what we called an above ground underground film. The frustration was that the films that were being churned out at the Factory never really were seen anywhere so we decided to come out of the proverbial closet and to expose the whole underground for what it was... 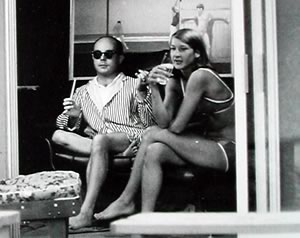 Chuck [Wein] and Genevieve Charbin started writing a script based on the fact that Bob Margouleff - who was a fellow who had a studio over on 47th Street - wanted to make a quick $2,000 what they used to call 'titty' film that would play in the Carolina drive-ins. He had bought a script for $250 called Stripped and Strapped and Chuck and Genevieve had persuaded Bob Margouleff that they could rewrite this and make it hip and cool and snappy and of the moment and preserve the zeitgeist and eventually it became called, it became entitled Ciao Manhattan - a salute to the lifestyle of the moment.

Edie Sedgwick was never intended to be the lead in this film - Ciao Manhattan... It was going to be a beautiful young lady who had just appeared at the Factory by the name of Susan Bottomly [International Velvet] and she was just this startling young ingenue whose father was the District Attorney of Boston and had convicted the Boston Strangler... we had to.. get releases from everybody and so Susan Bottomly was 17 and we needed her father's permission so at the last minute he refused and she was out but in the script her name, the character name, was Susan.

So, the day before Easter Sunday me and Chuck and Genevieve and John Palmer went down to the Chelsea Hotel to see if we could roust Edie out of whatever it is she was doing at the moment. So we went down there and found her with Gregory Corso who was a friend of her brother Minty's in Harvard...

Gregory went 'What's this film, what is this about! What is this about!' He didn't have any teeth at that time but he was very very aggressive - and was kind of like managing Edie's life so to speak and Edie was always quite aware of what everyone was doing and she liked all the attention and she said 'sounds fun, we'll shoot in the park tomorrow' and she got all dolled up and we started shooting.

This began a spate of producing footage of unfinished scenes from an unfinished script which came to a screeching halt on Memorial Day. We were shooting out in Fort Lee, New Jersey - that scene where Ginsberg is running in the woods. John Palmer and I at that point said this is not really working and so we basically cleaned house and got rid of all the amphetamine, astrological charts and so forth and really took a look at the footage which by this time Genevieve had cut into one or two frame segments. Again, this amphetamine haze that surrounded the project at this point was really crippling. It was very embarrassing because every night 7 nights a week one went to Max's Kansas City at midnight and Mickey [Ruskin] the owner would sit at the cash register and every time we walked in - John and I - he would say, 'Well, is it finished yet? Where's the movie?' So it became increasingly embarrassing and the pressure was on to finish the movie which was unfinishable. Edie, by the way, had disappeared.

No one knew where Edie was. I visited her several times in a series of hospitals in the course of '67 into '68 - starting with Gracie Square which is a private hospital in midtown Manhattan and ending up in a charity ward in Manhattan State - and after which nobody knew where she really was. We'd heard she'd gone back to the west coast but there were no clear messages. Her family pretty much washed their hands of her and so it was hard to get a fix about where Edie Sedgwick was anytime in late '67 and early '68...

In 68/69, we had several large shoots which we planned - trying to work around the very few people who were in the original footage who were still available. Paul [America] wasn't available. Edie wasn't available - essentially no one was available except for Bob Margouleff's father who had only appeared in one scene and we decided to expand the role of Mr. Verdeccio since he was paying for the shoot anyway. He was a wonderful man. He was a mink salesman or he had a very large wholesale mink company and he was a great salesman and a great - just one of those French Russian Jews with a great panache and a great style - very charismatic man. All I had to do was say Mr. Verdeccio talk about this - and he would go! And so we shot all that material with Verdeccio trying to use characters and introduce a few characters, trying to build pieces around which the material that existed could be somehow put into some sort of context.

All during this period - '68 and '69 - John and I... were obsessed with finishing this film and we were convinced that whatever gambit we had come up with at an given point... if we could only shoot Paul [America] in jail we could finish the film - if we cold only shoot Mr. Verdeccio on the massage table and then we could introduce the voyeuristic aspect of him watching everybody on TV - we now have a device through which we could finish the film. And on and on it went.

So eventually it came to a point where we realized that we would keep going forever with these gambits and we will never finish the film. At which point John left the country, went to London on other things and I eventually found Edie in California in Santa Barbara and actually visited her and said, 'Edie do you wanna finish the film?' She'd been through hell - self-induced hell. But she looked fantastic..."