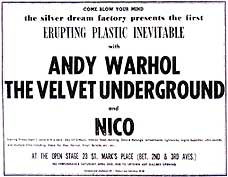 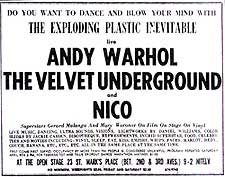 Although most people refer to the EPI at "the Dom" it actually premiered in the hall above the Dom Bar. According to "Bob" John Liikala who ran the Open Stage, "no one referred to my site as the Dom, it was the 'Open Stage.' Just to set history straight, 'Dom Inc.' did not premiere the [E.P.I.] event, it didn't even exist." (See APRIL 1966: THE VELVETS PLAY THE DOM)

Joe Dallesandro at the Castro

Joe Dallesandro will be attending the screening of the new documentary about his life - Little Joe - at the Castro cinema in San Francisco on Saturday, June 20, 2009 at 4:15 pm. The screening is part of Frameline 33 - the San Francisco International LGBT Film Festival - the longest running LGBT film exhibition event in the world. 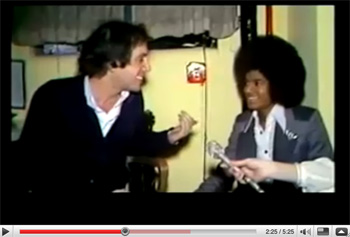 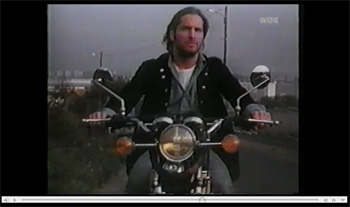 The trailer for Little Joe is here.

Warhol star Joe Dallesandro (Loves of Ondine, Flesh, Trash, Heat), will be attending the screenings of the recently completed documentary about him - Little Joe (dir. Nicole Haeusser) - at the Seattle International Film Festival on June 6 at 7:15 pm and June 7 at 4:00 pm. 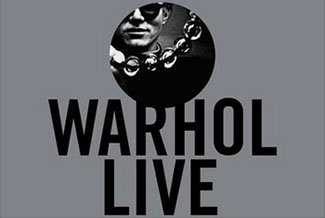 Detail from the front cover of the Warhol Live exhibition catalogue

The Warhol museum will be opening their "Warhol Live" exhibition with a party featuring DJ Glenn O'Brien to take place from 7 pm - midnight on June 13, 2009.

The exhibition, which runs from June 13-September 13, 2009 features more than 640 items relating to Andy Warhol's life-long interest in music and dance. Warhol was a member of his college's modern dance group at Carnegie Tech; he lived (with Philip Pearlstein) at the home and studio of the multi-cultural choreographer and dance theorist, Franziska Boas, during his early days in New York; one of his first exhibitions in New York were drawings of the dancer Frank Butler in 1954 at the Loft Gallery; he attended the Judson Dance Theater concerts at the Judson Church which included works by Lucinda Childs (with whom Warhol star Bibbe Hansen studied); directed numerous dance-related films including Paul Swan and Jill Johnston Dancing (assisted by mail artist Ray Johnson); and did various silkscreens of dancers and musicians including Merce Cunningham.

In regard to music, probably Warhol's best known projects were his production of the Velvet Underground's first album and the multi-media show, the Exploding Plastic Inevitable. He also directed quite a few music videos and illustrated a considerable amount of album covers, including the Rolling Stones Sticky Fingers album. A catalogue raisonnné has been published of his album covers - Andy Warhol: The Record Covers 1949-1987, Catalogue Raisonne

The New York Times is reporting that Joe Simon's case against the Warhol Foundation, the Andy Warhol Authentication Board and other entities, will go ahead after a court ruling on May 26, 2009. Simon had purchased a Self-Portrait which was authenticated by Fred Hughes when Hughes was head of the Warhol Foundation and then later de- authenticated ("Denied") by the Andy Warhol Authentication Board when Simon re-submitted it in 2001 and 2003 (with additional documentation).

Prior to considering a work for authentication the Board requires submitters to sign a Submission Agreement in which the owner of the work waives their right to sue the Authentication Board, the Foundation, the Estate of Andy Warhol and their representatives. Because Simon had signed such an agreement in order to get the Authentication Board to consider his painting, the Warhol entities were arguing that he had waived his right to sue. The Court upheld Simon's right to sue, despite his having signed the agreement, because according to the Court's decision "A party may not invoke such an agreement to insulate itself from intentional wrongdoing, such as that alleged in this action." The decision could have far-reaching implications for any other foundation or authentication board which requires such a waiver or has required such a waiver in the past. Collectors who have submitted works in the past under the waiver may also be affected. The Court's decision cannot be appealed.

Simon's case against the Board will now proceed. The New York Times (May 27, 2009) notes that "Judge Laura Taylor Swain ruled that Mr. Simon-Whelan had asserted his allegations 'plausibly' enough for the case to continue to the discovery phase on many of its claims."

and "Warhol authentication battle moves closer to trial" in The Art Newspaper here.

"John Cage and Experimental Art: The Anarchy of Silence" will open at the Museu d'Art Contemporani de Barcelona on October 23, 2009. "Ray Johnson. Please Add to & Return" will open at the same museum on November 6, 2009. Both shows will run until April 1, 2010.

Some artellectuals have linked Cage's theories of "musical seriality" to Warhol's use of repetition. Although Warhol denied that he was influenced by Cage's musical concepts, he was certainly aware of Cage's music through the Judson Church Dance Theater performances of the early 1960s. Cage's boyfriend, the dancer Merce Cunningham, was also the subject of silkscreens by Warhol in 1963 and a series of screenprints in the 1970s. (Warhol's Silver Pillows were featured as part of the stage set of Cunningham's dance piece RainForest in 1968 which also included costumes by Jasper Johns.) Cage's Theater Piece No. 1, performed at Black Mountain College in the summer of 1952, is often considered a precursor to the Happenings of the late 1950s/60s.

Ray Johnson did his own Happenings, beginning in 1960, which he called "Nothings." He was primarily known, however, for his "mail art," his "moticos" and his collages. The Ray Johnson exhibition is a version of the show that Alex Sainsbury curated at Raven Row in London from February 28 to May 10, 2009. A selection of works from the show can be found on the Raven Row website here. (Once you get to the page, click on the Image Galleries to the right.)

Details on Ray Johnson at MACBA can be found here.

Details on John Cage at MACBA can be found here.

John Cale to represent Wales at the Venice Biennale 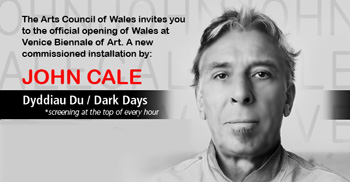 John Cale will represent Wales at the 53rd Venice Biennale of Art 2009 with a new, specially commissioned installation which will be shown in the Capannone at the Ex-Birreria on the island of Giudecca from June 7 - November 22, 2009.

“As surprised and honoured as I was to be asked to contribute to the Welsh presentation at the Venice Biennale of Art 2009 it also was a challenge that I eagerly accepted. It offers an occasion to address certain pernicious issues in my background that had lain dormant for so long. There are certain experiences uniquely suited to the exorcism of mixed media and I am grateful for this opportunity to address them.”

Arthur Danto's Andy Warhol to be published in October 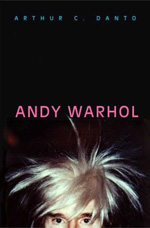 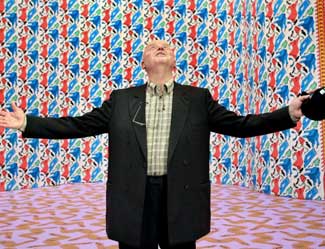 Thomas Bayrle at his retrospective at MACBA, 2009

An interview with Bayrle from the Summer 2002 issue of Art Forum can be found here.

Andy Warhol: The Last Decade to be published in September 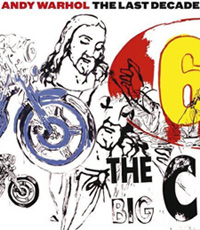 Andy Warhol: The Last Decade, covering Warhol's work from his last ten years, including his religious art and his collaborations with Basquiat and Clemente, will be published by Prestel in September 2009.

Claes Oldenburg at the Whitney Museum 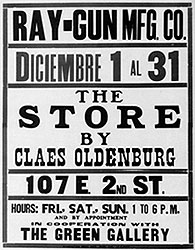 The poster for Oldenburg's "The Store" (1961)
(See "Abstract Expressionism vs. Pop")

"Claes Oldenburg: Early Sculpture, Drawings, and Happenings Films" and "Claes Oldenburg and Coosje van Bruggen: The Music Room" which opened in May at the Whitney Museum in New York continues until September 6, 2009. Included are rare screenings of films of Oldenburg's Happenings, projected in loops on the walls of the Film & Video Gallery - including two films, Fotodeath (1961) and Autobodys (1967) which have not been shown since first screened in the 1960s.

It was only a couple of months after visiting Claes Oldenburg's "The Store" exhibition in late 1961, which featured artistic representations of ordinary household foodstuffs, that Warhol began painting his Soup Cans (see: "Claes Oldenburg's Store"). The previous year, Oldenburg had exhibited his "environment," The Street, at the Judson Gallery, along with Jim Dine's The House. (See "Ray Gun exhibition at the Judson Gallery").

Holly Woodlawn in Sex After Death 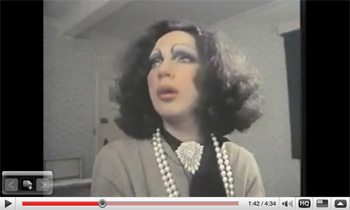 A clip from the 1971 alternative comedy, Is There Sex After Death, featuring Warhol star Holly Woodlawn, has materialized on You Tube. In the clip Holly is interviewed about a variety of topics from circumcision to the Vietnam War as she swigs from a beer can hidden in a drawer. (Her response to solving the war in Vietnam is "a mathematician I'm not.")

The clip can be seen here.