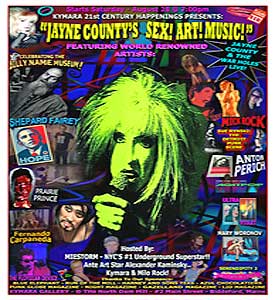 Jayne County, who starred in the London production of Andy Warhol's Pork, will be headlining an event at the Kymara Gallery in Maine on August 28th - performing with her new band The War Holes featuring Agitpop bassist Milo Rock and Bentmen drummer Frank Coleman.

From the press release:

"The show, which had a successful run at the Chelsea Hotel in New York City, will include the art of Jayne County, who is being hailed as the 'Grandma Moses of Pop Art' along with recently discovered photographs by Warhol Superstar Billy Name, new work by Mick Rock and Tubes drummer Prairie Prince.  Also represented in the show are Shepard Fairey, Anton Perrich, Rock photographer John Conroy, The Floydian Device, Underground artist Philly Abe, Detroit Punk Rock photographers, Sue Rynski and S. Kay Young, the Internationally renowned music group Muha, Warhol Superstars Mary Woronov, Louis Waldon, Ultra Violet,  and the work of NY Antè Art Superstars Fernando Carpañeda, Miestorm, Ian Couch, Alexander Kaminski, Kymara and Milo Rock. The opening will also honor Warhol Superstar Billy Name and the opening of The Billy Name Museum in 2011. In the tradition of a 'Happening'  spontaneous performance is encouraged."

Catering will be provided by Blue Elephant Catering with a special dessert by Serendipity 3. Admission is $10.00 (21+ only) with "a portion of the proceeds to benefit the Animal Welfare Society of the Kennebunks."

The Facebook page for the event can be found here. 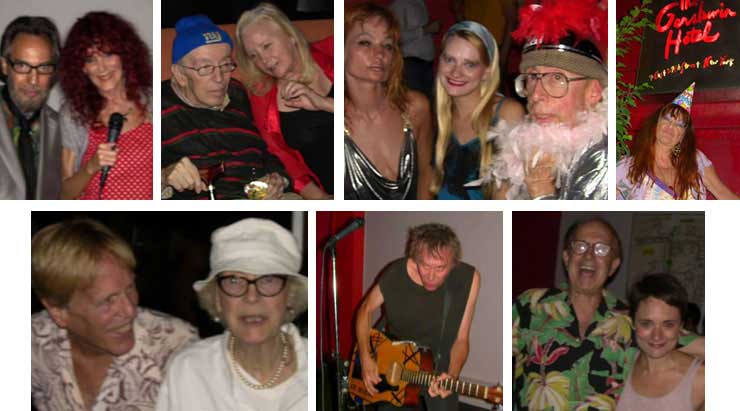 The Andy Warhol birthday party at the Gershwin Hotel on August 6th included a birthday cake and song for Andy as well as Ruby Lynn Reyner doing a few Jackie Curtis tunes while guitarist/singer Joe Bendik "rocked the crowd" as one party-goer put it. Other musicians played music from 1928, the year of Warhol's birth, while a DJ played disco music from Studio 54. Michael Musto from the Village Voice also attended.

The Summer of Andy: A Funtime Warhol Birthday Bash in New York 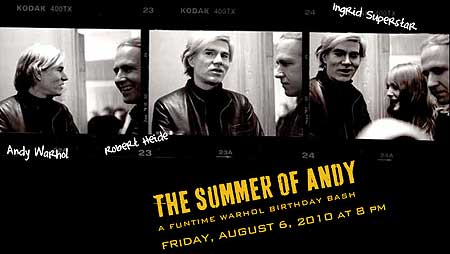 A special celebration of the life of Andy Warhol will be taking place at the Gershwin Hotel in New York on Warhol's birthday, August 6, 2010 - presented by Suzanne Tremblay and hosted by Caffe Cino playwright, Robert Heide, artist Neke Carson and Hoop in memory of Callie Angell, Nat Finkelstein, Baird Jones and Ronald Tavel. The event is also honouring the recent publication of The Autobiography and Sex Life of Andy Warhol

and the "Andy Warhol: The Last Decade" exhibition at the Brooklyn Museum.

Not to be missed. Full details on the flyer here.

Pork at the ICA 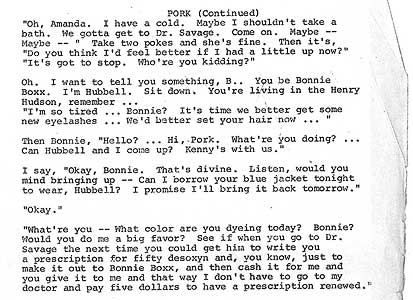 Section of the script of Andy Warhol's play, Pork from the Queer Voice exhibition

The script of Andy Warhol's play, Pork, is one of the items being shown at the "Queer Voice" exhibition at the I.C.A. in Philadelphia. In addition to Warhol, other artists in the group show include Laurie Anderson, Harry Dodge and Stanya Kahn, Sharon Hayes, John Kelly, Kalup Linzy, Jack Smith and Ryan Trecartin.

The show is curated by Senior Curator Ingrid Schaffner.

Details on the ICA show at: here.

Marilyn Monroe: Life as a Legend opens at The Warhol museum in October 2010

An exhibition exploring the life and imagery of Marilyn Monroe is due to run at The Warhol museum from October 24, 2010 until January 2, 2011.

Andy Warhol: Motion Pictures opens at the Museum of Modern Art in December 2010 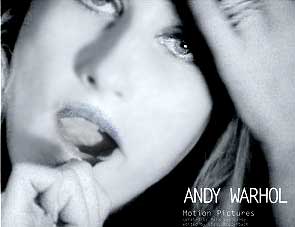 An exhibition devoted to Warhol's movies will open at the Museum of Modern Art in New York on December 19, 2010 and continue until March 21, 2011.

Previous incarnations of the show ran at the KW Institute for Contemporary Art, the Moscow Museum of Art, the Museo de Arte Latinoamericano de Buenos Aires (MALBA) as well as museums in Rio de Janeiro, Sao Paulo and Prague. An exhibition catalogue, Andy Warhol: Motion Pictures was published in 2005, featuring text by Callie Angell, Thomas Sokolowski and others.

Details of the MOMA show here. 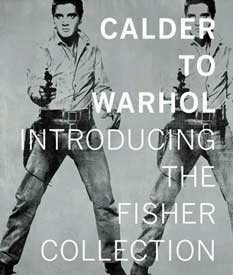 The front cover of the "Calder to Warhol" exhibition catalogue

“Calder to Warhol: Introducing the Fisher Collection” runs through Sept. 19 at the San Francisco Museum of Modern Art.