I consider myself bisexual. It wasn't that I was sexually attracted to men per se, but you know, if you do something for awhile you can acquire a taste for it. (JOE82)

Flesh was shot by Paul Morrissey while Andy was recuperating from his gunshot wounds. Warhol never actually attended any of the filming, although he was credited as the producer of the film in the New York Times review of it and the film was advertised as Andy Warhol's Flesh. During negotiations with the Warhol Foundation in about 1995 Morrissey waived the rights to a number of films (including San Diego Surf and Lonesome Cowboys) in exchange for ownership of other films such as Trash and Flesh. (JHA)

According to Joe Dallesandro's biographer, Michael Ferguson, the idea for Flesh was conceived on the set of Midnight Cowboy. Some of the Factory regulars had been invited to appear in a party scene in Midnight Cowboy and spent much of their time just waiting around on the set. Both Paul and Joe were there and came up with an idea for a film that would be about a boxer, incorporating some of the stories that Joe told Paul about his life or the people he had met on the street. (JOE72)

Paul kept in touch with Andy during the filming of Midnight Cowboy. Warhol thought it might be a good idea to make their own film about a hustler (even though they had already made one in 1965 - My Hustler), and to release it before Midnight Cowboy was released. (Ibid) So, instead of making a film about a boxer, they made another film about a hustler, with Paul Morrissey saying that his inspiration for the film came from the 1960 Mauro Bolognini film, La Giornata Balorda (script by Pier Paolo Pasolini). (JOE 81)

Flesh was shot mostly on weekends during August/September 1968 at a cost of approximately $1,500.00. (JOE72). The scene between Dallesandro and Louis Waldon was filmed in the Greenwich Village apartment of art critic David Bourdon. (DB311) Joe was nineteen at the time. The film followed Joe's character as he turned tricks in order to pay for his wife's girlfriend's abortion. (One of his fellow street hustlers was played by Joe's real life brother Bob Dallesandro.)

The artist who picked Joe up in the film and took him back to his apartment to pose for him was Maurice Braddell, an old British actor who appeared in the science fiction film of H.G. Well's Things To Come (1936). Morrissey later used him in his own first feature length film Sleep Walk (1964). At the time that Braddell appeared in Flesh, he was working restoring paintings for museums. (JOE74-5).

The film also marked the debut of transvestite superstars Candy Darling and Jackie Curtis who Andy had met on the streets of Greenwich Village in August of 1967. Geri Miller, who gave Joe a blow job while Candy and Jackie sat reading movie magazines in Flesh, was a stripper in real life who had worked at Al Goldstein's M & M Club and the Metropole, as well as once popping out of a birthday cake for Mick Jagger. (JOE76) (See Geri Miller Interview)

According to Callie Angell, "Flesh opened in September 1968 and was a considerable success, running continuously at the Garrick Theater for the next seven months, after which it moved uptown to the 55th Street Playhouse." (FAW35)

Prior to opening at the 55th Street Playhouse, it had opened at the Cinema Theatre in Los Angeles by June 20, 1969: 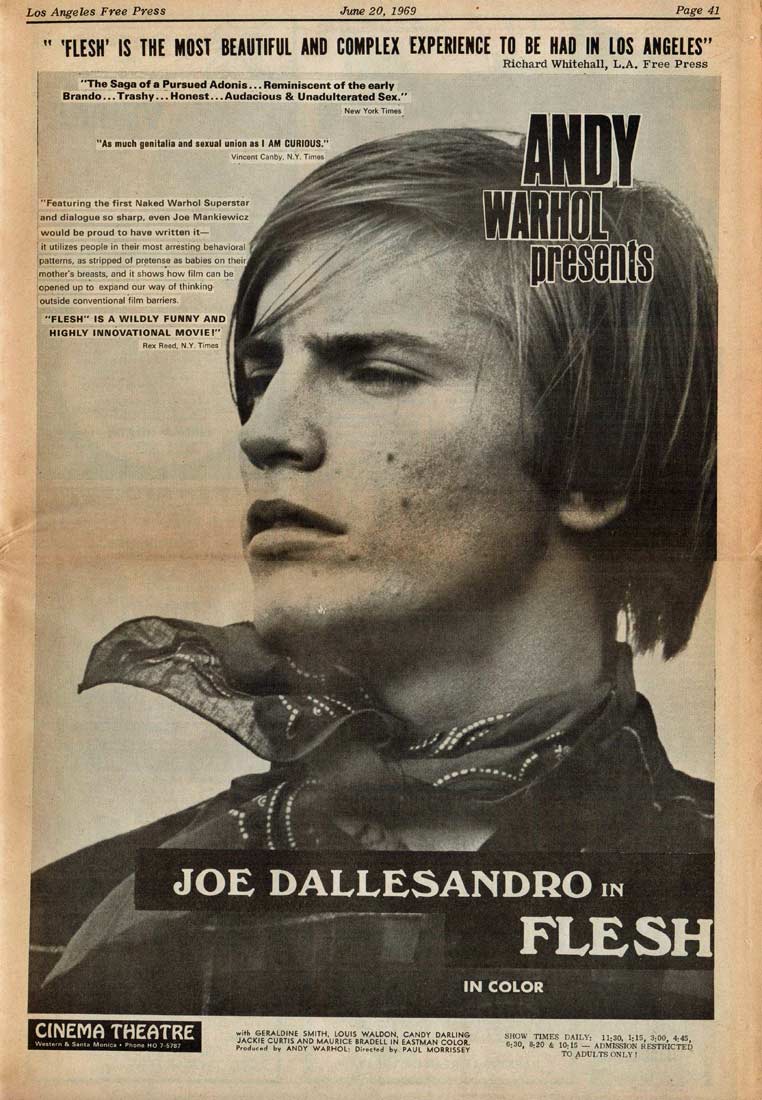 For more information about the Cinema Theatre, see the quote by David E. James in Sleep.

After opening in L.A. Flesh opened at the 55th Street Playhouse on Monday, August 4, 1969, as per Callie's quote above. 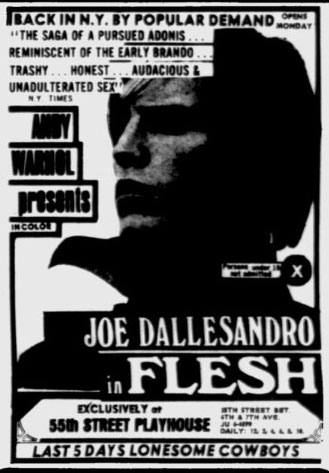 Although at that time Flesh replaced Lonesome Cowboys ("last five days" noted in ad above), it was joined by Lonesome Cowboys as a double bill at some point between 4-11 September 1962 (probably Monday, 8 September as films tended to change at the venue on Mondays). The first ad for the double bill appeared in the 11 September issue of the Village Voice. (The previous issue - 4 September - only advertised Flesh at the venue). 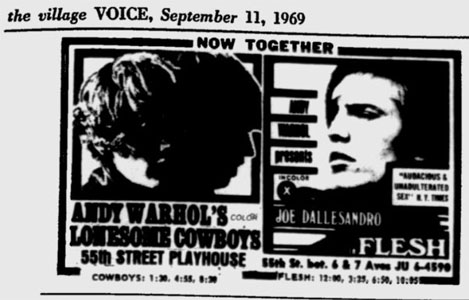 An ad in the 16 October 1969 issue of the Voice noted that the double bill was closing on Sunday (19 October). 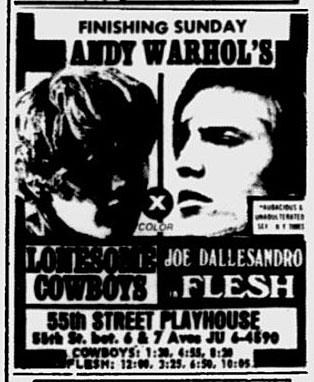 Flesh next appears at the Trump Village cinema in Brooklyn as per an ad from the 30 October issue of the Voice: 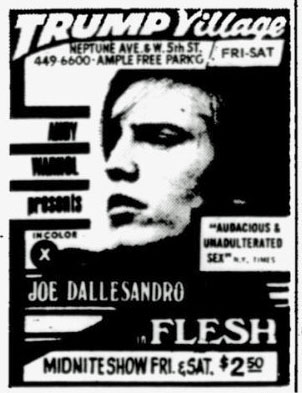 About the Trump cinema, Philip Goldberg writes on the Cinema Treasures website, "After Trump Village was opened, a small shopping center went up on Neptune Avenue. In it was a tiny movie house named the Trump Cinema which was converted from retail space and opened around December 1968. It began screening 16mm prints until it was eventually equipped for 35mm... the theatre featured a fully automated projection booth that could be operated by pushing a button in the box office."Quite a few Warhol films were shown from late January 1969 as weekend midnight screenings, including: Tub Girls, My Hustler, I, A Man, Bike Boy, The Nude Restaurant, and Couch. 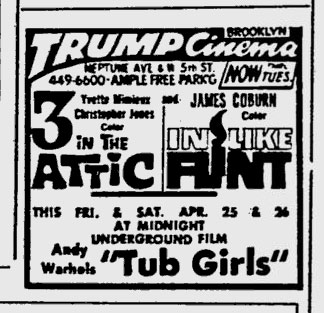 Flesh opened in London the following year - 1970. It opened at The Open Space on Tottenham Court Road (now the Odeon) on 15 January 1970 to mostly negative reviews. The venue was raided by the police on February 3rd, three minutes before the end of the film, after a complaint by a member of the public. The police confiscated the print, the projector, the sound equipment, the venue's membership book and correspondence files under the Obscene Publication Act. They also detained members of the audience for questioning. (JOE83)

In the House of Commons, one MP publicly expressed his "greatest exception to being told what I may or may not see by some half-educated bigot at Scotland Yard." Scotland Yard's response was "We aren't zombies," pointing out that the decision to raid the venue was made by a local precinct captain. (JOE83) By the end of the week, with the Director of Public Prosecutions saying that they would not pursue it as an obscenity case, the police changed their investigation to "fire code violations." (Ibid)

In February 1970, Paul Morrissey went to London to join the British distributor, Jimmy Vaughn in a meeting with John Trevelyan, director of the British Board of Film Censors who came out in support of The Open Space and the film. However, the University of Edinburgh cancelled their showing of the film fearful that they would be prosecuted by the Scottish authorities. As a protest against this decision, twenty students locked themselves inside the University's theatre for two hours. (JOE84)

It turned out that it was Jimmy Vaughan, the UK distributor, who had arranged for some of his friends posing as general members of the public to complain to the London police in the first place in order to gain as much publicity as possible for the film. (JOE85)

In June of 1970, Jimmy Vaughan arranged a deal with Constantin, one of the largest film distributors in West Germany, to book the film into mainstream cinemas throughout Germany where it became one of the top five moneymakers of 1970. (JOE87)