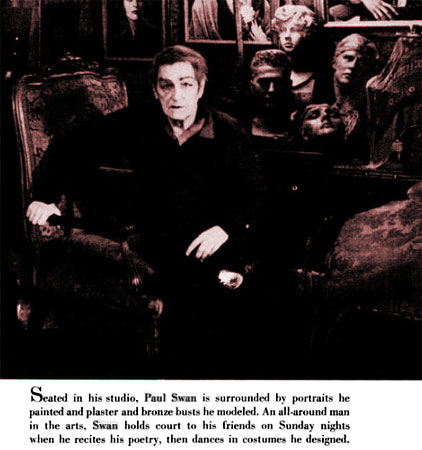 A journalist once described Paul Swan as "the most beautiful man in the world". Born in 1883, he attended the Art Institute of Chicago in 1900, studying art and sculpture. In 1903, he arrived in New York City with only $20 and found a job as an illustrator for the Butterick pattern company. Inspired by the performance of Russian actress Alla Nazimova as Hedda Gabler during her U.S. tour, he painted her portrait and she commissioned five additional paintings. With the money from the commission he went to Greece where he studied classical sculpture and dance. He became the first private pupil of Diaghilev Ballet Russes star Mikhail Mordkin.

Swan married the granddaughter of American sulptor Erastus Palmer - Helen Gavit of Albany, NY - and they had two daughters, Paula and Flora. At the Gavit family's summer estate in the Adirondack village, Stony Creek, Swan experimented with several artistic styles, producing a "series of vibrant, warm oils and watercolors filled with archetypal images and streams of human figures reaching for the hope and innocence that had been wrecked by the sound of guns during World War I." He exhibited at the National Academy of Design, Knoedler's, MacBeth, and Blakeslee Galleries in New York and won awards from the Salon de Artistes in Paris for his scultures. He also established an artists' colony in Stony Creek - and also "executed commissioned portraits and busts of some of the twentieth century's most important figures." (RAC1/2)

Swan was also an actor - Oscar Hammerstein chose him to headline at the Victoria Theatre in the late teens, and he toured the U.S. and Great Britain with the Sir Ben Greet Shakespeare Company. His film work included Diana the Huntress (1918) and Cecil B. DeMille's Ten Commandments (1923), In addition to appearing in Paul Swan, he also appeared in Warhol's Camp.

In Paul Swan, the actor/dancer/artist, "becomes increasingly camera-shy, repeatedly retreating behind the convenient shelter of his stage curtain to change his clothes, oblivious to urgent requests that he come out and do all that on film. 'I don't care,' he says grumpily, 'you'll cut this all out anyway, won't you?'... During Swan's hunt for the lost shoes, long minutes pass during which nothing is visible except the abandoned stage set, while the dancer is heard off-stage (and off-screen) knocking things over." (FAW23) An off-screen voice is heard yelling at him to do it without the slippers and then finally urges him to do a speech instead. Swan does his poetry instead - and then a staged speech, possibly from his theatrical act, when the film ends abrubtly, cutting him off.

Apart from its entertainment value, Paul Swan is also notable because it employed camera movement. Warhol was known for his use of a static camera but in both this film and the other Warhol film starring Paul Swan - Camp - Warhol uses the camera's zoom lens to get close to his subject. This occurs in only one section of Paul Swan - the rest of the film is shot in the usual Warholian manner with a static camera. In addition to this footage of Paul Swan, there are also four 100 foot silent color rolls in the Warhol film collection of a similar performance by Swan. They are labeled Paul Swan I-IV and were processed on November 25, 1965. (FAW23)