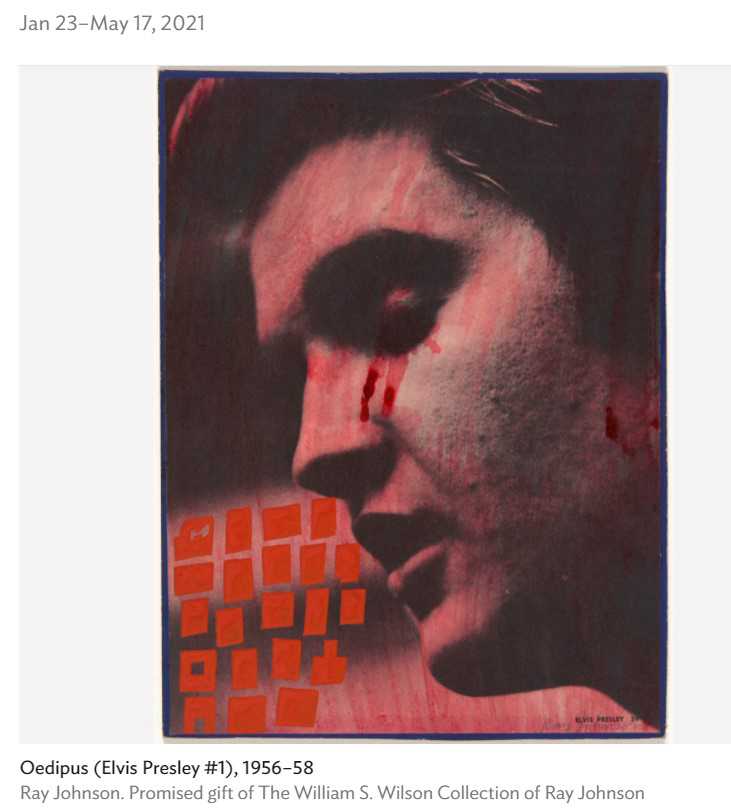 William S. Wilson's collection of works by Ray Johnson will be exhibited at the Art Institute of Chicago from January 23 to May 17, 2021. (Johnson was a friend of Andy Warhol and is on the cover of Callie Angell's Films of Andy Warhol, Part II, helping Warhol film Jill Johnston Dancing.)

Bill was a friend who I still miss dearly. The Art Institute is using his image of Elvis Presley (created before Warhol's Elvis) to advertise the show (see above). In an email from 2005 about Jackson Pollock and the comic book character Little King, Bill mentioned that he was "going back to the original title, "Oedipus" for the Elvis painting:

I mention "The Little King" in the essay on Pollock and Johnson in "Dear Jackson Pollock." Most significantly, Pollock had painted a painting he had titled "The Little King," but then he painted over it and retitled the canvas "Galaxy." I mention a bit of the meaning of this event in that essay. Note, for chronology, that Pollock's popular--art reference is earlier than his Abstract Expressionism, which, with its drips, was satirized by Ray Johnson with his Elvis Presley. I am going back to the original title, "Oedipus."

I wrote a book, The Real World, as a result of Bill's death - to help lift me from the depression I found myself in after he died. Excerpts from the book mentioning Bill are online - see William S. Wilson and Ray Johnson et al. The obituary I wrote when he died is at William S. Wilson: good-bye my dear friend.

Bill was a big part of my life. He still is.

Excerpt from the excerpt of The Real World:

My friendship with Bill lasted longer than my correspondence with Mark and became deeper as time went on. Our shared gossip about the art world evolved into gossip about the world in general. Bill became my Rock of Gibraltar, my security blanket, the friend I turned in times of need. I felt closer to him than I did to most of my younger London friends. When my father died in 2005, I turned to Bill.

My reminiscing about my father caused Bill to reminisce about his. Although he talked about his mother a lot - the artist May Wilson - I realised that I hardly knew anything about his father. Bill wrote:

"My father was politically radical in the 1930s, but because serving a few terms in the legislature, followed the Democratic Party line and platform, while nursing hopes of something more socialist. He didn't budge much, so as the social policies liberalized, eventually they caught up with his positions, and in some way passed him by. Gradually he seemed relatively conservative, but still mostly voting Democratic (Eisenhower was probably the exception), and when the Soviet Empire dissolved a Marxist communist state, he said that they (Communists) had not been given enough time."

I had no idea that Bill's father had been a legislator for the state of Maryland. The only other time he mentioned his father was in regard to a story on my site about Holly Woodlawn and how she had avoided the draft during the Vietnam War. Holly, the transvestite “superstar” who co-starred with Joe Dallesandro in Trash, had shown up at the draft board during the Vietnam War era wearing “hot pants and sandals, with a dab of blush for color.” She was promptly excused from service when the doctor noticed she had breasts due to hormone treatments. Bill responded with "Oh Holly! The courage! What balls!!" Then he told me about his own experience with the draft during an earlier war and the relief his father felt when he was deemed unsuitable for military service:

"I would have to go someday, so I asked to be drafted because I was at an impasse in the horrors of graduate school. I went to the induction center, ready for the army, but when I asked the doctors about a fatal arthritis I had been diagnosed as suffering from, & showed them the diagnosis by the doctor who had taught two of them, I was sent home.. I, who thrive on ordeals, was exempted for a fatal disease I didn't know I didn't have, although part of the treatment, with radium, could have killed me. I was dismissed as we were getting into line for the bus to Camp Meade. So then I taxied to the Baltimore Museum of Art, where I was fetched by my father, he still wrecked emotionally by my departure toward killing fields..."

I envied the relationship that Bill had with his father. I’m not so sure that my father would have been “wrecked emotionally” if I had volunteered for military service during the Vietnam War. He probably would have been disappointed if I had been rejected. Fortunately, the draft had ended by the time I reached my 18th birthday. Bill's story led, as usual, to a story about Ray Johnson; in this instance an explanation of how Ray avoided being drafted. Johnson was rejected "because of a murmur of the heart,” which Bill noted was “bureaucratic code for homosexual in those days." He added, "I have a friend who still thinks that he has a heart murmur, but the doctor heard something in his voice & saw something in his demeanor, not in his heart.”

November 14, 2020: The Warhol Museum is "proud to partner with Visual AIDS for Day With(out) Art 2020 by presenting TRANSMISSIONS, an online program consisting of six new videos considering the impact of HIV and AIDS beyond the United States." The online premiere is November 30, 2020.

"This program is presented in honor of Thomas Sokolowski... who passed away in May. Tom was one of the founders of Day With(out) Art and served as director of the museum from 1996 to 2010."

November 13, 2020: There will be an online launch of Duchamp's Pipe: A Chess Romance Marcel Duchamp & George Koltanowski on November 19, 2020. Event is free, registration required.

October 23, 2020: Craig Highberger's documentary, Superstar in a Housedress - about his friend and superstar, Jackie Curtis, who appeared in Women in Revolt - is now available on Amazon Prime.

In addition to appearing in Paul Morrissey's film, Curtis was also a playwright and actor on the Off-Off-Broadway scene. Her productions include Glamour, Glory and Gold and Vain Victory. 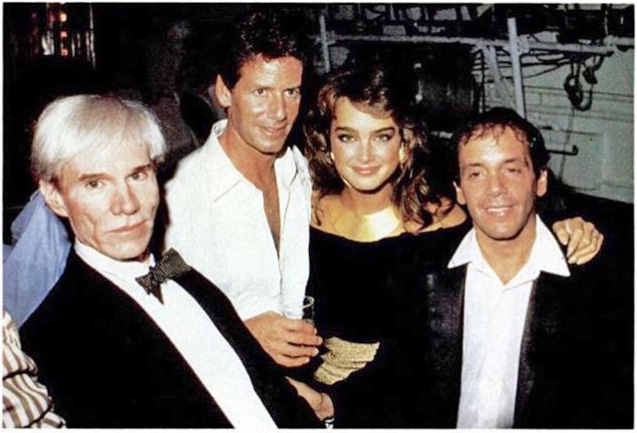 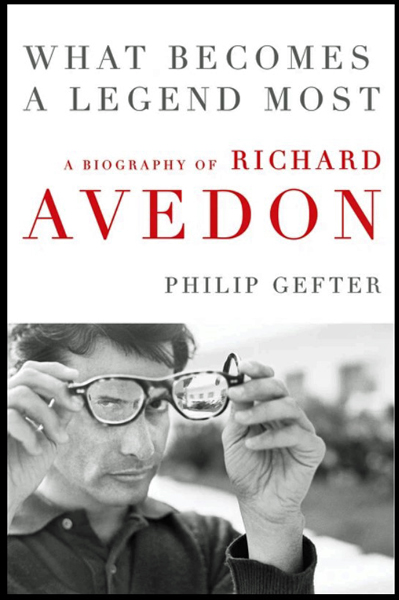