On 6 May 1955, the artist Dudley Huppler sent Andy Warhol a postcard from the artists’ retreat, Yaddo, in Saratoga Springs, writing that Huppler “had met "a new phenomenally bright writer, Ralph Pomeroy, that I'll draw so you can see." After Warhol and Pomeroy met, they decided to collaborate on À la Recherche du Shoe Perdu. (See "Andy Warhol Pre-Pop," p. 6, 2006)

The author Edward Field mentions Pomeroy in his book, The Man Who Would Marry Susan Sontag (Wisconsin: The University of Wisconsin Press, 2005). Field first met Pomeroy and his friend Freddie Kuh in Paris in 1948, where they were living after being discharged from the Armed Forces. Field notes: “Out of the vast numbers of homosexuals in the armed forces, Ralph had been one of the unfortunate ones discharged in periodic roundups and wasn’t eligible for veteran’s benefits.” (Field, p. 32)

Field describes Pomeroy as being both a painter and a poet and claims that when Jean Cocteau saw a photograph of Ralph in the window of a shop, Cocteau "instantly wanted to see him in his film, Orphée, but unfortunately, Ralph had just left on a trip to Rome and couldn’t be found.” (Field, p. 31). Because of Pomeroy's resemblance to Truman Capote, he was at the time referred to as "le faux Truman" according to Field:

Under his blond bangs, Ralph Pomeroy had a painter’s clear, gray-blue eyes, and a sulky, vulnerable mouth. He was often called “le faux Truman” for his startling resemblance to the author in the jacket photo, with similar bangs, reclining and holding a rose, on Capote’s novel, Other Voices, Other Rooms, which made Capote famous. Actually, Ralph looked more like the photo than the real-life Truman Capote did. He was the idealized version. (Field, p.31)

Warhol was also attracted to Capote's photograph on the dust jacket of Other Voices, Other Rooms. Truman later recalled, "When he was a child, Andy Warhol had this obsession about me and used to write me from Pittsburgh... When he came to New York, he used to stand outside my house, just stand out there all day waiting for me to come out. He wanted to become a friend of mine, wanted to speak to me, to talk to me. He nearly drove me crazy." (LG187) Warhol's friend Robert Fleisher also recalled that Warhol "was madly in love with him [Capote]. There was a photograph of Truman Capote on a couch, stretched out in a plaid vest, and that’s what sent him off provisionally. As I remember, he had that around all the time and talked about it… it’s from the back of Other Voices, Other Rooms..." (PSC117) (See "Andy Warhol: from Nowhere to Up There," p. 15)

According to Field, Ralph's “first poems had already appeared in Poetry (Chicago)” when he met him in 1948. Poetry magazine had actually only published one poem by Field by that that - in their May 1948 issue - although they would would end up publishing about fifteen of his works over time. 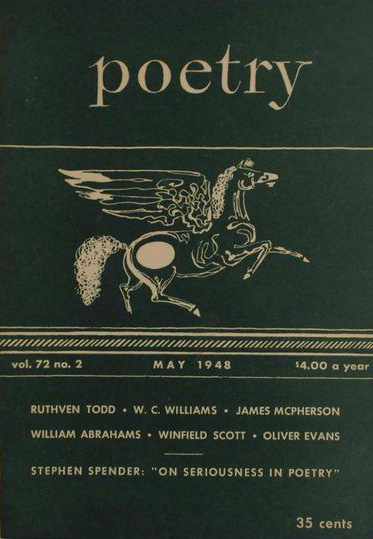 Front cover of the May 1948 issue of Poetry magazine

In the late sun the birds flock flock.
The grey chipping of the hollyhock
Scatters the hectic weed
Around, around the the maypole ground.
Highly is it longer anymore.
The hill has turned.

Warmly the branches speckle big
And always are the sounding sides rough.
The broken fur swells and breaks
Upon the garden wall.
The floor is swept with green.

Field kept in touch with both Ralph and Freddie Kuh after they returned to the states from Paris. Field recalls that during the early fifties in New York, Ralph “had a glorious top floor-through apartment with a skylight in a Greenwich Village brownstone" and "always lived on what I can only call a professional level, and giving an impression of success is absolutely necessary for a successful career. Again, this level of luxury was being paid for by a lover, Monroe Wheeler, who like his name was a wheeler-dealer at the Museum of Modern Art, and was the lifetime partner of the novelist Glenway Wescott.” (Field, p.65)

Ralph was interviewed by Wheeler when, after his return from Paris, he went to the Museum of Modern Art looking for a job. Charmed not only be his looks but by his talents and intelligence, Wheeler invited Ralph to dinner at the Park Avenue apartment he shared with Wescott, beginning a love affair and later a friendship that lasted until Wheeler’s death. Wheelers’s affair with Ralph created a triangle that seemed to be recurrent in the Wheeler/Wescott relationship where a third person was always involved. A friend of Alfred Kinsey of the famed Kinsey Report, Wheeler held parties in Ralph’s Village apartment to allow Kinsey to observe urban gay life for his study of homosexuality, although back in Indiana, Kinsey and plenty of first-hand experience himself with the provincial variety. It was through Wheeler that Ralph met such figures as the photographer George Platt Lynes, who snapped him at the height of his youthful glory, and writers Katherine Anne Porter, Louise Bogan, Edith Sitwell, Thornton Wilder, and William Inge, several of whom became his friends. (Field, 65)

In 1955, Ralph was accepted at Yaddo and Field was there too. Presumably, that was when Huppler sent Warhol his note and a drawing of Ralph. According to Field, Pomeroy “never one to waste his time, quickly threw himself into a steamy affair with the host Clifford Wright, who was completely besotted with him.” (Field, 66) Huppler, meanwhile, was having an affair with Tobias Schneebaum who was also at Yaddo that year. (Field, 69 and "Tobias Schneebaum" obituary, Independent newspaper (UK), 29 September 2005.)

Pomeroy returned to New York after Yaddo and Field recalls that "These were the years when it seemed that Ralph Pomeroy could not fail to become successful." He was attractive and "knew all the right people" in New York and "was publishing poems in the glossy pages of Harper’s Bazaar and the New Yorker. Andy Warhol, not yet a superstar, collaborated with him on a book of drawings and poems." (Field 70 - 71)The May 1958 issue of Harper's Bazaar included a considerable amount of illustrations by Andy Warhol as well as a contribution by Ralph Pomeroy.

When his friend, Freddie, opened a restaurant in San Francisco in 1956, Ralph joined him. (Field 70 - 71) Kuh’s restaurant was the Old Spaghetti Factory which he opened in leased premises at 478 Green Street. (J.L Pimsleur, Obituary - Frederick Walter Kuh, S.F. Gate, 12 November 1997.)

According to Field, Pomeroy "in a restless search for success and romance couldn't be fixed in one place and was always going to Europe, shuttling among San Francisco, London, New York, or anywhere he had a change at the Big Breakthrough... Several times he managed a stay a year or two in London, supporting himself by freelancing. He edited for a London publisher a couple of slight but charming coffee table books on ice cream and breakfast, then the immigration authorities caught up with him and had to leave. But he was an ideal roving correspondent for London and New York art magazines, reporting on art shows wherever he happened to be... He published a glossy art book on Theodoros Stamos, ad had shows of his own in galleries... But after each event, puzzlingly, things never developed further. " (Fields, 222-3)

The book on Stamos that Field refers to was Stamos, published by Abrams in 1975. The books on ice cream and breakfast were The Ice Cream Connection: All You’d Love to Know About Ice Cream (NY, London and Ontario: Paddington Press, 1975) and First Things First: A Connoisseur's Companion to Breakfast (1977). A photograph and biography of Pomeroy is included in the The Ice Cream Connection: 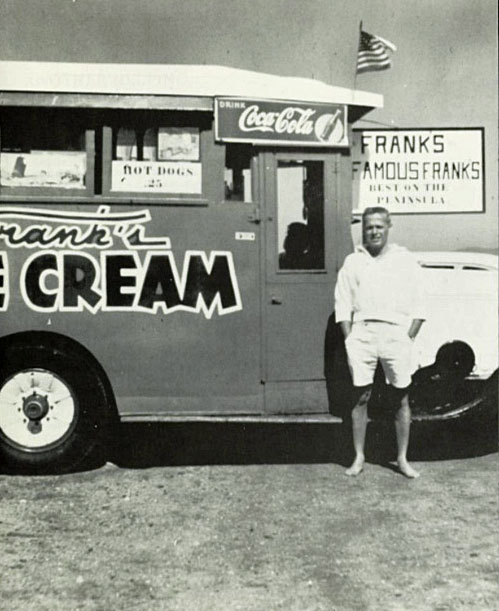 The gifts of poets often turn out to be ideal for projects involving discoveries, descriptions and disclosers and the eyes of a painter can enlarge those gifts that much more. Ralph Pomeroy is both poet and painter and from those twin trunks has found himself branching out in any number of directions He has been Travel and Entertainment Editor for House and Garden; has worked in a number of art galleries, directing one or two; been a university professor; exhibited as a painter; read his poems and lectured on art. As an art critic he has been on the editorial staff of Art News in America and Art & Artists in England and contributed to many other art publications.

In the United States he has given poetry readings cross-country in colleges and universities. He is represented in more than a dozen anthologies, including The New Yorker Book of Poets and the Anchor A Controversy of Poets. His poems have been widely published in magazines both in the United States and Great Britain and three books of his verse have been published. Through his work as a museum curator he has created and helped create a number of important exhibitions and contributed to exhibition catalogues. He has worked as a soda jerk (during his college days) and as a bartender in San Francisco.

Mr. Pomeroy was educated at the Art Institute of Chicago, the University of Illinois and the University of Chicago. He has also been a member of the faculty of the San Francisco State University, lecturing in Comparative Literature - a field particularly suited to his multi-talents. One of his most popular classes dealt with the interplay between writing and art and was called "Pablo and Gertrude and Marcel and Claude" - respectively, Picasso, Stein, Proust and Monet.

At present Mr. Pomeroy is working on a new book of poems, a novel and a study of Navajo abstraction. (Ice Cream, 284)

Pomeroy eventually settled permanently (more or less) in San Francisco where he got involved in the S & M scene. Field recalls:

Ralph’s graduation into S & M was somewhat of a mystery to me, a sneakers-type guy, and it got him into trouble. A too-vigorous session left his wrist fractured and in a splint. Another time, he was in the hospital with a collapsed lung from an early hours stabbing after leaving The Eagle’s Nest, a leather hangout. Leather seemed inappropriate on someone his age, with such a puny body and no buns… (Field, 224)

In San Francisco, Ralph continued to work at the Old Spaghetti Factory as a waiter until he and other members of staff were found to be stealing from the proceeds of the restaurant. According to Wiki, Pomeroy "taught at the Academy of Art University in San Francisco in the late 1980s and 1990s."

Freddie Kuh retired after giving up the Old Spaghetti Factory in 1984 and moved to Sonoma Valley. He didn't ask Pomeroy to join him because he didn’t want “a resident drinking up all his liquor.” (Field, 227) Field ends his account of Pomeroy’s life with: “When Freddie died [in 1997], leaving Ralph thirty thousand dollars, it was too little too late. His health ruined by heavy drinking, Ralph only survived him by a year.” (Field, 227) Ralph Pomeroy died of cirrhosis of the liver on November 18, 1999 - a bit longer than a year after Freddie Kuh's death.

to Andy Warhol interview by Ralph Pomeroy for Afterimage magazine