Vain Victory: the Vicissitudes of the Damned was an Off-Off-Broadway musical written during 1969 - 1971 by Jackie Curtis who also appeared in "Andy Warhol's Flesh" and "Andy Warhol's Women in Revolt" - both directed by Paul Morrissey. (Jackie claimed that Warhol, rather than Paul Morrissey, filmed his scenes in Women in Revolt but that was contradicted by Holly Woodlawn in her autobiography, A Low Life in High Heels: The Holly Woodlawn Story - see "Women in Revolt.") Jackie was not part of Warhol's original silver Factory which gave rise to superstars like Edie Sedgwick, Nico and Mary Woronov. She appeared in her first film, Flesh, after Warhol had already moved his operations from the silver Factory to offices at 33 Union Square West in 1968.

Unlike his friend, Candy Darling, who also appeared in Flesh and Women in Revolt, Jackie did not live his life in drag. Sometimes he dressed as a man and sometimes as a woman. In addition to his Morrissey films, Jackie was also involved in alternative theatre both as a performer and writer. Plays prior to Vain Victory that were written by Curtis included Glamour Glory and Gold (1967) and Heaven Grand in Amber Orbit (first performed in 1969). (JCP1067) (JCP206) (JCP3511)

According to Jackie's friend, biographer and archivist, Craig Highberger, Jackie's personal copy of the script of Vain Victory was more than 200 pages with copious deletions and additions, and that "Jackie was almost constantly on speed during this period according to many sources." Even after trimming a third of it, it still ran to 2 1/2 hours when it first opened. Craig also notes that the artist Larry Rivers "created beautiful hanging clouds for the set design" and that Andy Warhol contributed a "Cow painting" which Jackie later sold when he was low on cash. (JCP3511-12) (Warhol did not do cow paintings per se. He did Cow Wallpaper. However, according to the cat. rais. there were "undetermined numbers" of cow panels produced that were stamped with Warhol's signature in 1966 and signed in 1971 and 1976. (cat rais. Vol 02B, p. 209) It may have been one of these panels that were given to Jackie, assuming that Jackie's claim of ownership was true.)

By May 1971, when the play opened at La MaMa, Jackie had recently finished filming Women in Revolt (see "Women in Revolt"), although it would not open in New York until February of 1972. Flesh, which featured Jackie Curtis and Candy Darling in small roles, opened in September 1968. Audiences would have been familiar with Jackie from his small scene in Flesh or from his previous work on Off-Off-Broadway - or they would have known him personally from New York night-life. Jackie was mostly raised by his grandmother, Ann Uglialoro, who was also the owner of the Lower East Side bar, Slugger Ann - which was Uglialoro's nickname. 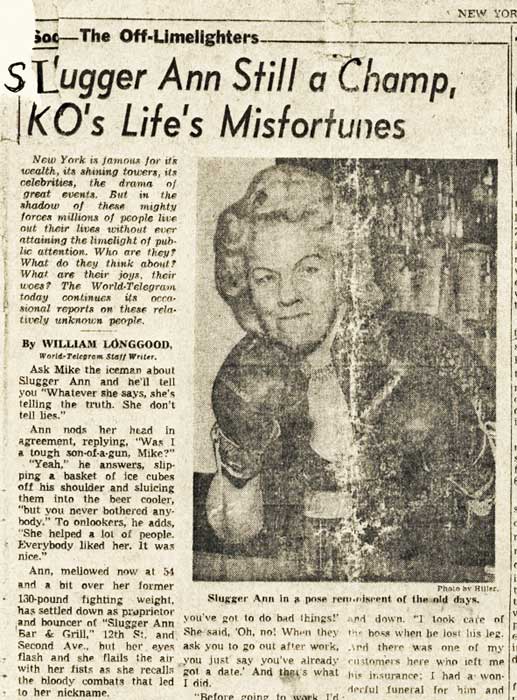 Vain Victory was performed at La MaMa for ten performances - Wednesday - Sunday, May 26 - 30 and June 2 - 6. The Village Voice ad announcing its opening was considerably more modest than the one in the January issue: 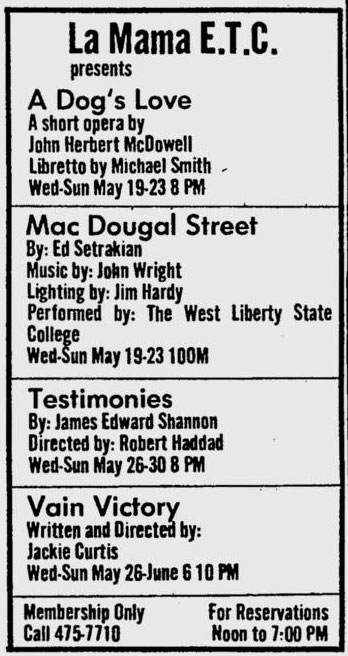 The La MaMa program gave the the credits of the production which differed from the original ad. 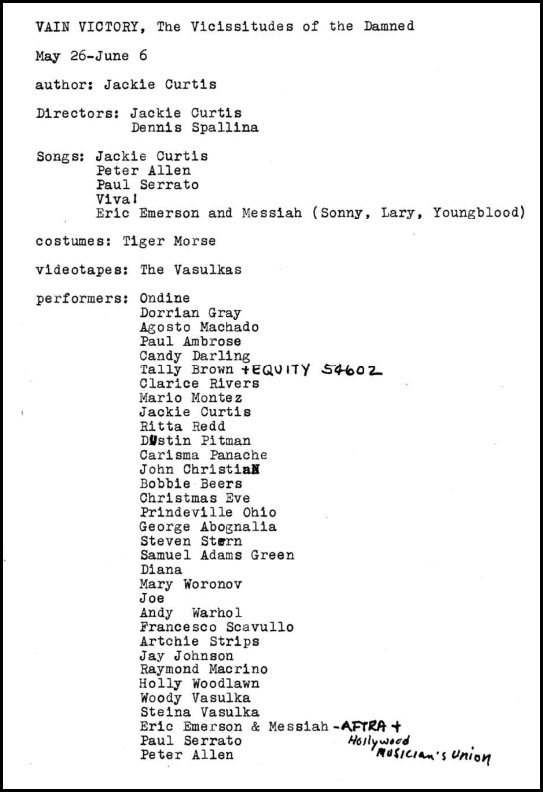 In the program Dennis Spallina was added as a co-director and Lou Reed was no longer credited with the music. Instead, songs were by Jackie Curtis, Peter Allen, Paul Serrato, Viva! and "Eric Emerson and Messiah (Sonny, Lary, Young Blood)." (See "Wonderboy: The life, loves and death of Eric Emerson," p. 4)

The script and the cast would change over time. Some of the people listed such as Andy Warhol) were not in any of the productions. Although Vain Victory was not "held over" at La MaMa as some accounts suggest, it opened about two months after closing at La Mama at a different venue, the WPA at 333 Bowery, on August 11, 1971. The run of the play at the WPA was well advertised. A large ad in the July 29, 1971 Village Voice announced that it was opening on August 11th as part of the WPA's "New Play Series." 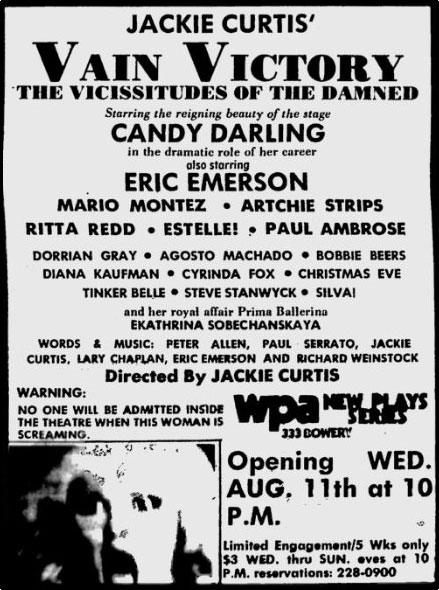 Additional ads in the form of a comic strip titled "Artchie Strips" true Adventures also appeared in the Voice.

"Artchie Strips" was a real person who was in the cast of the La Mama and WPA productions of Vain Victory. He is referred to in an interview with George Abagnalo and Holly Woodlawn that originally appeared in the August 1975 issue of Interview magazine and was republished on Interview's website after Holly's death in 2015:

ABAGNALO: Are you fond of Puerto Ricans now?

WOODLAWN: Oh, I love Puerto Rico! I adore it!

ABAGNALO: I remember once back in the '60s, we were at a friend's house, Artchie Strips, and he had been walking down the street and some kids had thrown water off a roof, onto him, and he was soaked and his tape recorder had been destroyed by the water, and I remember he said, "What kind of kids would do this?" and you said...

WOODLAWN: Puerto Ricans! Of course. I know my people. I have this whole Puerto Rican mad woman in my act called Chi Chi.

The Village Voice did not review the La MaMa production of Vain Victory but they did review the WPA production. The reviewer criticized the play for not only "lacking in wit" but also for lacking in "grace, charm, intelligence, narrative value, pacing, and theatrical flair."