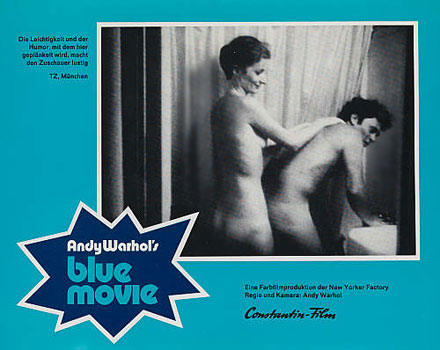 I'd always wanted to do a movie that was pure fucking, nothing else, the way Eat had been just eating and Sleep had been just sleeping. So in October '68 I shot a movie of Viva having sex with Louis Waldon. I called it just Fuck. (POP294)

Fuck or Blue Movie was shot in October 1968 at David Bourdon's apartment in Greenwich Village. (FAW36) Although Viva and Louis Waldon do have intercourse in the film, they spend much of the time talking about the war in Vietnam, cooking food and taking a shower. The blue tint of the film was actually an error. Warhol had used tungsten (indoor) film but there was sunlight streaming into Bordon's apartment, resulting in the blue tint.

It was shown only at the Factory until the following year when all four reels that were shot were shown at a benefit for Film Culture magazine at the Elgin Cinema on June 12, 1969. (Ibid) (For a discussion of the Elgin as one of Jonas Mekas' Film-Makers' Cinematheque - see: "The Jewish Museum, the Elgin Theatre and the Gotham Art Theater.") 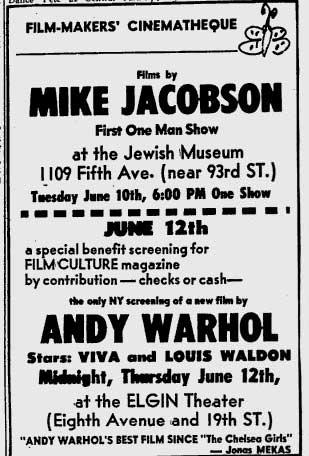 Then on Monday, 21 July, the film opened at the New Andy Warhol Garrick Theatre where Lonesome Cowboys had been playing but was dying "pretty quickly." (POP294) It was a shortened version (only the last three reels lasting 100 mins) and renamed Blue Movie to avoid the censors. 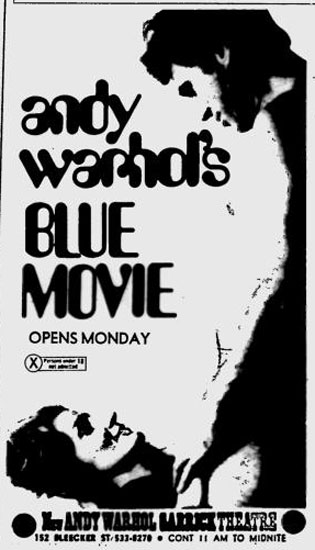 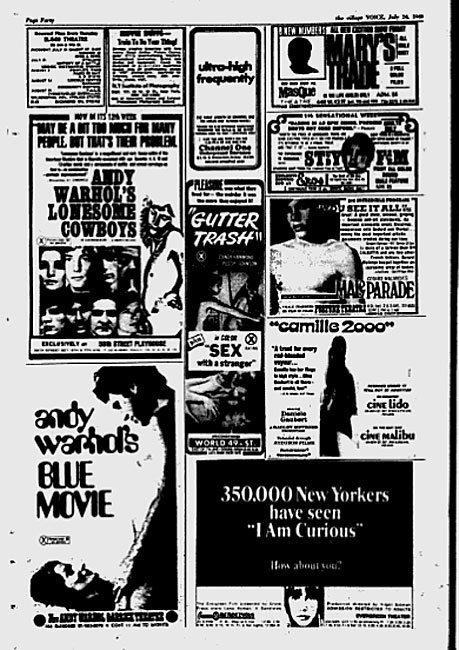 Less than a month after Blue Movie opened, the police seized Blue Movie on the grounds of obscenity.

An article that appeared in the 18 September 1969 issue of the New York Times noted that the film was ruled obscene the previous day:

Warhol reacted to the decision by bringing out a book version of the film. It contained a transcript of the dialogue with photographs that included Viva sucking off Louis and Louis apparently penetrating Viva. But his cock seems less than erect in all shots. A bar indicated when the camera moved during the film.

In the NY Times review of the film, published on 22 July 1969, Vincent Canby refers to a program note which explains that "Blue Movie" is "a film about the Vietnam war and what we can do about it," but the military is mentioned only briefly and the conversation flits from subject to subject without going into too much detail. Viva laments "I'm getting too old. I save my energy to try to preserve whatever fading youth I have left. And I feel that I've done enough battles. Now let the rest of them do it." (BMC21). Andy Warhol's film, The Nude Restaurant is more of an anti-war film than Blue Movie. 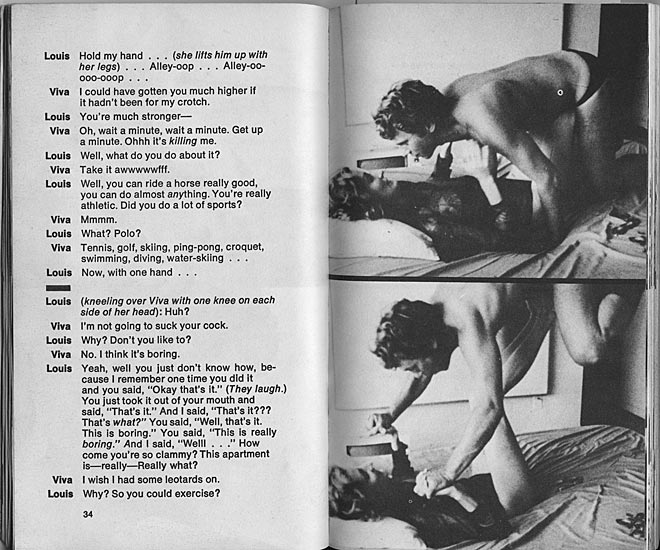 Most of the time Viva and Louis talk about sex. Viva also recounts some interesting biographical incidents - such as the time that Brigid Berlin threw babyfood at her and the time that the cops tried to arrest her in East Hampton for wearing a crocheted sweater with large holes and no bra underneath.

According to Bob Colacello, when the film Last Tango in Paris was released, Andy Warhol thought it was based on Blue Movie. (BC199)