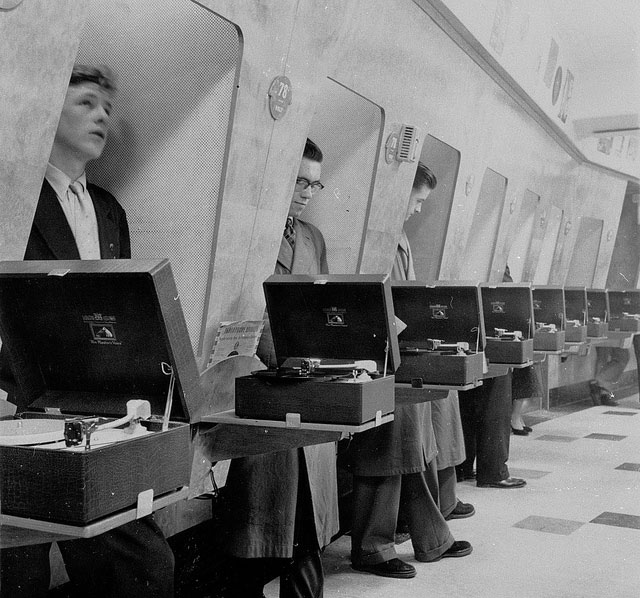 Shopping for music at HMV in the 1960s (Photographer unknown)

February 18, 2020: The author of the new Andy Warhol biography, Blake Gopnik, will be discussing the book with Jerry Saltz on April 20, 2020 at the New York Public Library.

In addition to writing Warhol: A Life as Art, Gopnik was a regular contributor to the New York Times and the staff art critic for the Washington Post and Newsweek.

Saltz is the senior art critic at New York magazine.

Tickets are free (with full access to wheelchair users) but should be booked in advance. Details on the NYPL website.

The Real World is out

February 5, 2020: Patti Smith has come to the aid of Passages bookstore which was recently the subject of a break-in. (See below) In addition to stealing a rare volume of Some/Thing magazine which included Andy Warhol's "Bomb Hanoi" front cover (see below). Also stolen were a signed edition of 1998’s Patti Smith Complete: Lyrics, Reflections & Notes for the Future. Smith contacted the bookseller and sent him a box of her books, all signed, which included her memoir Just Kids, The Year of the Monkey, M Train, Devotion, and a copy of the stolen book.

Smith will be giving a rare performance in London at the Royal Albert Hall on November 2nd and 3rd, 2020.

February 3, 2020: Previous Interview magazine editor Bob Colacello, who wrote one of the most gossipy accounts of Andy Warhol during the time he worked for him - Holy Terror: Andy Warhol Close-Up - will be appearing at the Tate Modern on April 22, 2020 in conjunction with their six month Andy Warhol exhibiton.

Tate Modern Warhol exhibition catalogue to be published in March 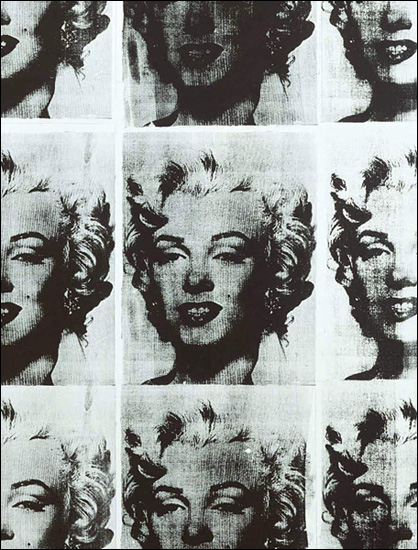 January 30, 2020: The exhibition catalogue for the six month Andy Warhol exhibition at the Tate Modern is due be published in early March. For details about the exhibition, scroll down.

January 30, 2020: Monique Van Voreen has died. Monique appeared in Andy Warhol's Frankenstein aka Flesh for Frankenstein (directed by Paul Morrissey), as well as the ill-fated Broadway play "presented" by Andy Warhol and Richard Turley, Man in the Moon (a production by Paul Morrissey). Van Voreen was born in Brussels on March 25, 1927 but made New York her home. She died of cancer at home at the age of 92. Her son is the actor (and realtor) Eric Purcell.

Sin at the National Gallery

A book to accompany the show will be published by Yale in April - see Sin on the Yale website. Written by Joost Joustra (the Howard and Roberta Ahmanson Fellow in Art and Religion at the National Gallery.) (Paperback: £12.95)

More details emerge regarding the Andy Warhol exhibition at the Tate Modern and the exhibition catalogue... Sort of

January 25, 2020: Further details of the Andy Warhol exhibition at the Tate Modern have come to light - albeit in a circuitous manner.

After the show finishes its run at the Tate, it will eventually be travelling to the Art Gallery of Ontario. Both the the AGO press release and the AGO website give a more thorough description of the show than the Tate Modern. According to the website:

...the exhibition opens with a selection of early male nudes from the 1950s. Warhol’s sexuality is an important theme in the exhibition.

His 1963 film Sleep stars his lover, the poet John Giorno, and his 1975 series of paintings Ladies and Gentlemen presents striking portraits of members of New York City’s transgender community.

Increasingly drawn to counterculture, Warhol also blurred the boundaries between the arts throughout his career, experimenting with multimedia, music, live performance and publishing.

Combining film projections, strobe lighting, audience participation and the sounds of experimental rock group The Velvet Underground, Warhol’s psychedelic multimedia environment Exploding Plastic Inevitable (1966) will be restaged in the exhibition, as will an installation of his floating metallic pillows entitled Silver Clouds.

The AGO press release also reports that a "fully illustrated catalogue" will be published by the Tate Modern in early 2020, featuring an interview with Bob Colacello, an "artist response" by Martine Syms, an essay on the Silver Clouds by Kenneth Brummel and a new text by Olivia Laing.

Colacello has recently given the Times (London) an interview but since it is pay-to-view, I'm not including the link here. Instead, here is a link to the interview he gave Vanity Fair last year: "Bob Colacello Remembers Life as Andy Warhol’s “Human Tape Recorder” by Erin Vanderhoof, which is free-to-view.

In other words, the exhibition will travel to more museums than the Whitney's recent retrospective.

Bomb Hanoi is stolen from Passages 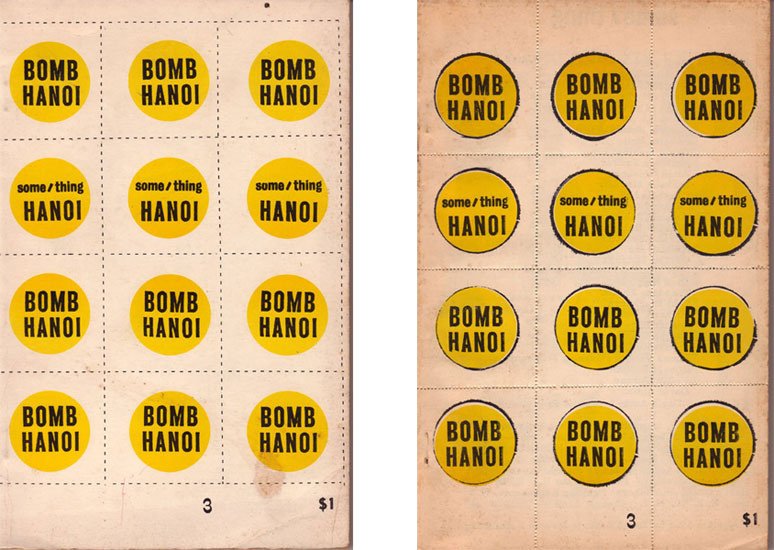 January 16, 2020: The January 1st theft at Passages Bookshop in Oregon included a five-volume run of the '60s poetry magazine Some/thing. The 1966 "Vietnam" issue featured a cover designed by Andy Warhol (above). Passages had both covers of the magazine. The first cover on the left was rejected because it was too 'perfect.' The design on the right was rougher. The rougher image was seen as a better reflection of the irony of the message - Hanoi were the "good guys" as far as the left was concerned and America was bombing the hell out of them. See the article by the editor David Antin of the poetry mag. in the March 7, 2011 issue of Design Observer:

When I went to see Andy I showed him our previous issues and told him about the Vietnam issue we were planning, he said, “Great!” What he’d really like to do was a Vietcong flag. But I said, “What we’d like you to do is take a prowar slogan like ‘BOMB HANOI!’ put it on the cover as a button, and fuck it up any way you like... (David Antin ,"Bomb Hanoi: The Andy Warhol Cover," Design Observer, May 7, 2011) 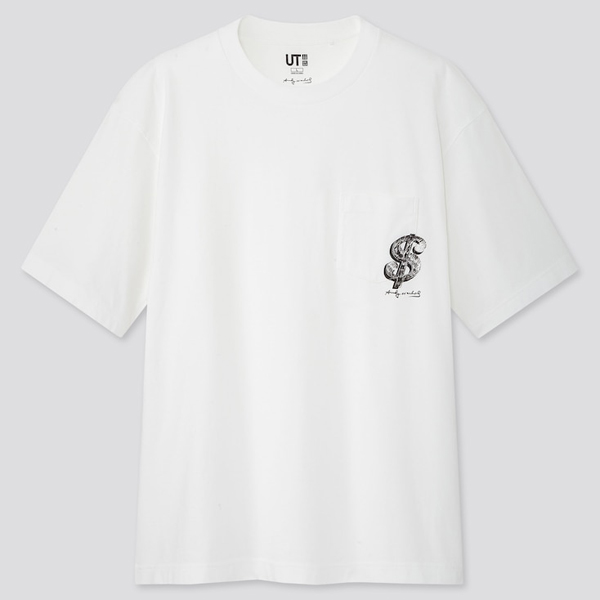 January 12, 2020: Uniqlo has launched a new line of Andy Warhol T-shirts in both the U.S. and in England. 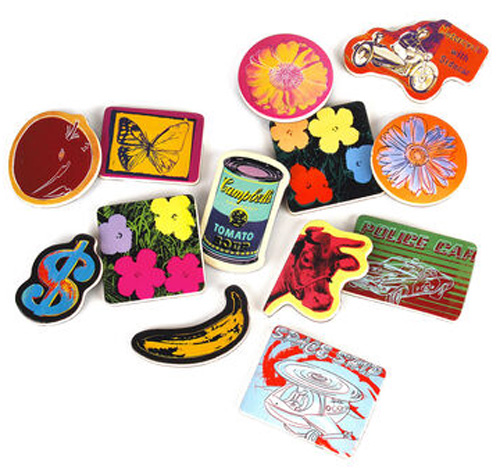 anyone for a fridge magnet?

January 1, 2020: The Tate Modern has begun selling Andy Warhol merchandise in conjunction with their six month Warhol exhibition starting in March 2020 - from carrier bags to fridge magnets to books.

December 31, 2019: Andy Warhol's Double Elvis (Ferus type, 1963) is among the most expensive works of art sold at auction during 2019. It came in sixth, just below Pablo Picasso's Femme au Chien, painted the year before. New York School artist, Robert Rauschenberg, beat both artists with the sale of Buffalo II (1964) at Christie's for $88.8m. The Abstract Expressionists were represented by Mark Rothko although it was the French Impressionist Claude Monet who came in first with Mueules from the Haystacks series - one of the earliest examples of an artist painting in series.

Some of Monet's "Haystack" paintings were exhibited in MOMA's exhibition, Claude Monet: Seasons and Moments at the Museum of Modern Art in 1960 and were given as an example by Charles Stuckey as a precedent of an artist painting in series as Warhol later did with his Ferus style Campbell's Soup Cans. (Quoted in "Campbell's Soup honours Andy Warhol."):

From the first volume of the Andy Warhol catalogue raisonne:, p. 070:

Precisely when Warhol began the Ferus-type paintings is not known, but it was probably not long after his first attempts with the Mõnchengladbach type in late 1961. The Ferus type comprises sixteen works beyond the group of thirty-two canvases. For the varieties of soup in the group of thirty-two, Warhol referred to a product list supplied by the Campbell Soup Company, checking off each once it had been completed and adding 'Turkey Vegetable,' which had been omitted from the company's list. The only element that distinguishes one canvas or one can from the other is the name of the variety.

With the set of thirty-two canvases, Warhol first realized the possibility of painting in series. Charles Stuckey, however has noted several precedents; the exhibition of Monet's later series paintings in Claude Monet: Seasons and Moments, at MoMA in 1960; Frank Stella's Aluminum paintings, shown at Castelli in the fall of 1960; and Stella's 1961 Benjamin Moore series, of which Warhol commissioned six small-format examples, which can be dated from canceled checks to mid-May 1961, probably after Warhol visited Stella's studio for the first time.

Stuckey's comment raises an interesting conundrum as to what constitutes a "series." Does a "series" have to be "serial" (i.e. time-based) in order to be a series? Do art writers use the term "series" appropriately? The Cambridge Dictionary defines "series" as "a number of similar or related events or things, one following another."

Warhol painted repetitively but it wasn't time-based. He wasn't painting his soup cans or flowers or images of Elvis at different times of the day as Monet did with his "Haystacks" series. A serial comic book is one which tells a story - which progresses from a to b to c. Warhol stopped at "a" and then repeated it retaining the random variations created by his painting methods.

The list of the top ten from the Art Newspaper: 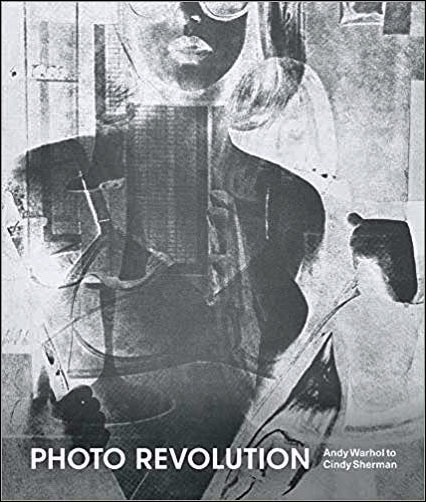 December 29, 2019: The exhibition, "Photo Revolution: Andy Warhol to Cindy Sherman" at the Worcester Art Museum closes in late Feburary 2020. The exhibition catalogue will be available from Amazon in late January. 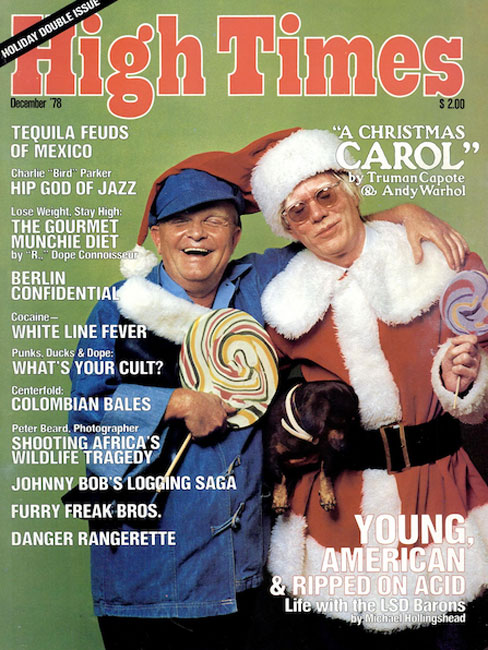 December 25, 2019: Merry Christmas from Warholstars. High Times magazine is running their 1978 Christmas interview with Truman Capote and Andy Warhol in celebration of the holidays. (And, of course, Happy Hanukkah as well, which started on the 22nd.)

Blake Gopnik: Warhol: From Elf to Grinch and Back Again 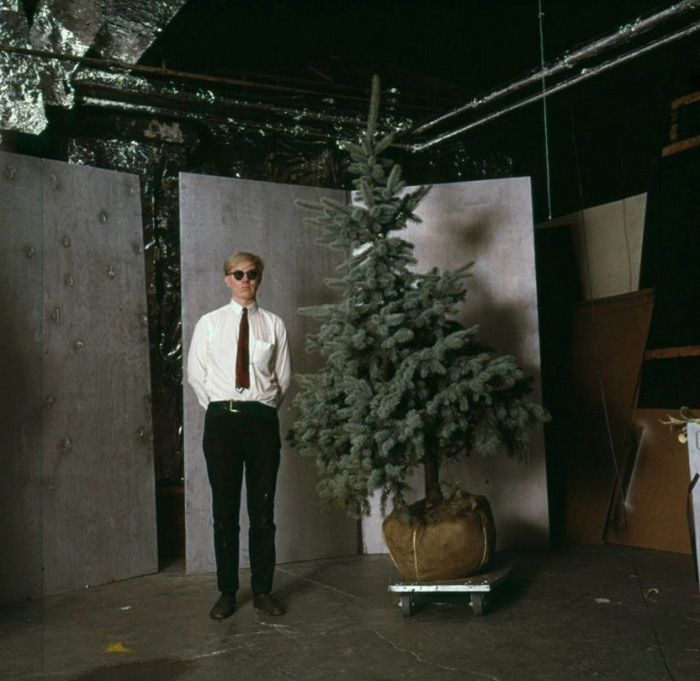 December 13, 2019: Blake Gopnik will be giving a free talk (with museum admission) on the many sides of Andy Warhol at the Art Institute of Chicago on December 18, 2009.

"Blake Gopnik is the author of Warhol, the first comprehensive biography of the Pop artist, published by HarperCollins. He has been the staff art critic at the Washington Post and Newsweek and is now a regular contributor to the New York Times."

For details, go to The Visualist.

Jonas Mekas interviews to be published in August 2020 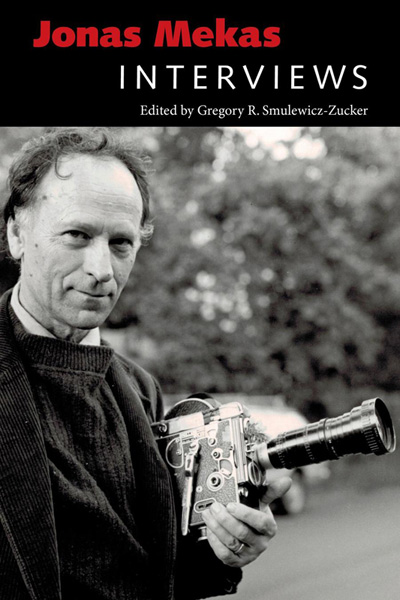 December 12, 2019: A collection of Jonas Mekas interviews - Jonas Mekas: Interviews (Conversations with Filmmakers Series) - will be published in August 2020 by the University Press of Mississippi - edited by Gregory R. Smulewicz-Zucker who also edited the second edition of Jonas Mekas’s Movie Journal: The Rise of the New American Cinema, 1959–1971 for Columbia University Press. Priced at $99.00 hardcover or $25.00 paperback.