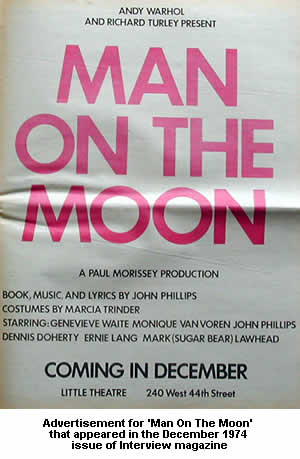 Bon Colacello covered the opening of Man on the Moon in the "Out" section of Interview magazine, v. 5 no. 3, March 1975:

Then there was a party at Sardi's (LA4-0707). Susan Bottomley, Marcia Trinder and Amanda Lear sat at Genevieve Waite's table. The paparazzi sat at Monique van Vooren's table. Elsa Peretti sat in a phone booth. Paul Newman was having dinner downstairs.

It was noted in the same issue, during an interview with Lee Radziwill, that the play "opened on Broadway on the Wednesday and closed on the Saturday of the preceding week." Both Warhol and Radziwill commented on the play during the interview:

Lee Radziwill: "I thought Genvieve Waite was fantastic. I bought her album the next day."

Andy Warhol: "I have the whole play in my pocket. It makes me nostalgic already. I guess it was a home play."

Andy Warhol: "He's very big. He wrote all the songs for the 'Mom n Papas.' He's been married three times and has has a famous person from each wife - MacKenzie Phillips is a teenage movie star, and now he has China Phillips coming along who's a beauty, and Tamerlaine Phillips with Genevieve. Michelle with Warren. All so happy."