Andy Warhol: Revelation opens at the Brooklyn Museum on November 19, 2021

September 18, 2021: Andy Warhol: Revelation runs at the Brooklyn Museum from November 19 - June 19, 2022. The Chelsea Girls is being screened as part of the exhibition. 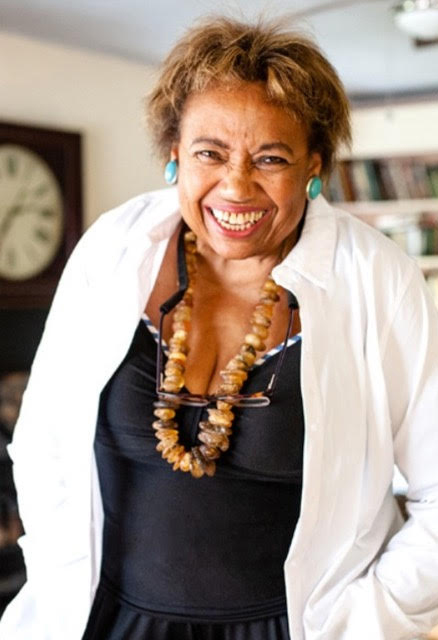 September 15, 2021: Frederator has optioned Hidden Heroes, a series of plays by Warhol star Abigail McGrath, who appeared with Viva in Tub Girls. (My interview with McGrath appears at: Interview with Abigail Rosen (McGrath).

Andy Warhol's shopping chum, Stuart Pivar, is suing the Van Gogh Museum for $300 million over this: 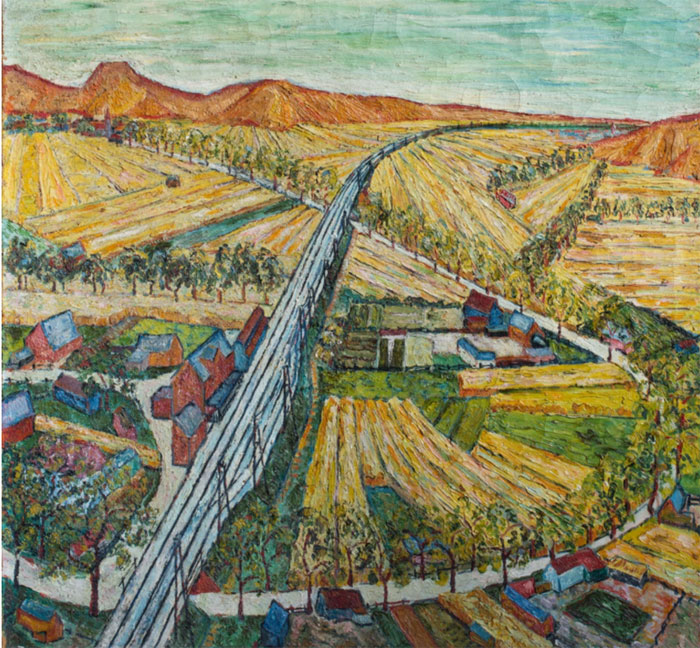 Andy Warhol's shopping chum, Stuart Pivar, thinks this painting he obtained at a country auction is a Van Gogh worth $300 million

September 8, 2021: Andy Warhol's shopping chum, Stuart Pivar, is suing the Van Gogh Museum for $300 million after the museum's Head of Collections and Research said they could not authentic a painting Pivar claims is by Van Gogh that he found at a country auction in March.

According to the New York Post, the Head of Collections and Research of the prestigious Van Gogh museum, Marije Vellekoop, wrote a letter to Pivar on August 13th (included in court documents), saying that “The rejected work is in our opinion stylistically, iconographically or technically … clearly too far removed from Van Gogh’s own work that research and further discussion is deemed pointless...”

Loner at The Ball to be re-published 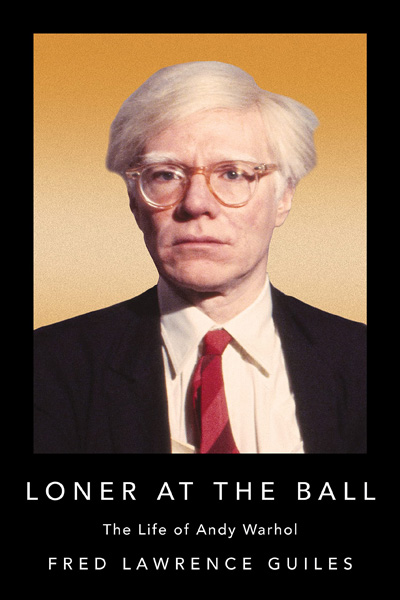 September 7, 2021: Loner at The Ball by Fred Lawrence Guiles is scheduled to be re-published in March 2022. One of the earliest biographies of Andy Warhol, it has a considerable amount of details about the artist's life that does not appear in any of the other biographies. Unfortunately, it doesn't have comprehensive footnotes - but there is so much "new" information (actually old information that people have forgotten about) that it is HIGHLY RECOMMENDED. 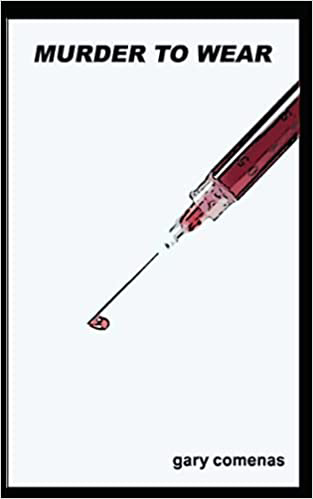 Front cover of Murder to Wear

24 August 2021: Nothing to do with Warhol but plenty to do with the club, drug and fashion scene of New York. Escape from everything that's going on with Blake Webster as he progresses from supermodel to super-junkie. He's got everything New Yorkers crave the most: Youth and Beauty. A pulp crime thriller about the people on the "right" side of the tracks leading the wrong sort of lives. Out now. (Many thanks to Jackleton Press.)

August 3, 2021: The Todd Haynes' documentary on the Velvet Underground will open at cinemas on October 15, 2021. A review of the film when it was shown at Cannes in July can be found in The Guardian newspaper.

According to John Cale, it was in the summer of 1965 that the band gave their first public performances as the Velvet Underground:

In the summer of 1965, with Sterling and Angus in the band, we gave our first public performances as the Velvet Underground. We extemporized soundtracks, playing in front of, beside or behind screens on which silent black and white movies by Jack Smith, Piero Heliczer, Barbara Rubin, Andy Warhol and many others were shown. Thus we became something of a presence as one of the three New York bands that came out of the Lower East Side. The others were the Fugs and Holy Modal Rounders. (AU80) (See "Andy Warhol, the Expanded Cinema, the Velvet Underground and the Cafe Bizarre.") 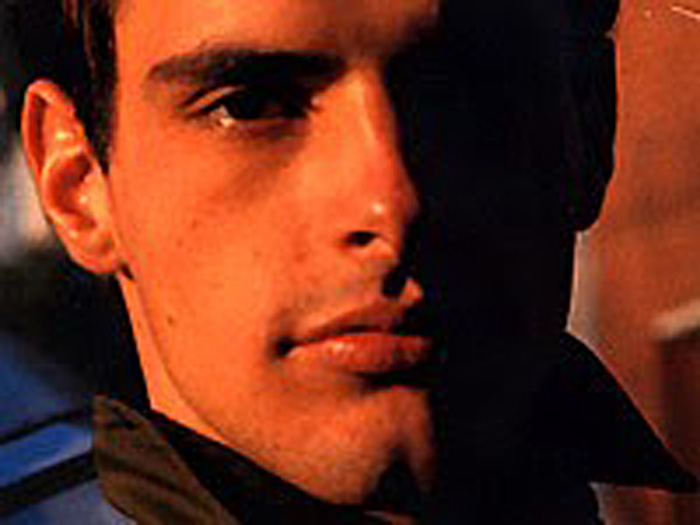 My dear brother Paul left us on April 9 2020, another unfortunate victim of the Corona Virus. Paul was raised and spent most his life on Bleecker St. in Greenwich Village N.Y.C. His education included Little Red School House, Music and Art High School, City University and Julliard School of Music, the latter studying classical composition with Leonard Bernstein. Music wasn't the only art that Paul was passionate about as he was very active in painting and underground films too. A full Renaissance individual who loved reading, baseball and long distance swimming. My brother led a full life, a pleasure to get into discussions with and those brotherly bonds will be dearly missed. (quoted in GA to CG, July 5, 2021)

Prior to appearing in Women in Revolt, Paul Kilb also starred in Gregory Markopoulos' Twice a Man. He has also been mentioned as writing the music for a production of Lanford Wilson's Balm in Gilead, and apparently played piano for the group Citizens for Interplanetary Activity. (GA to GC, July 7, 2021) 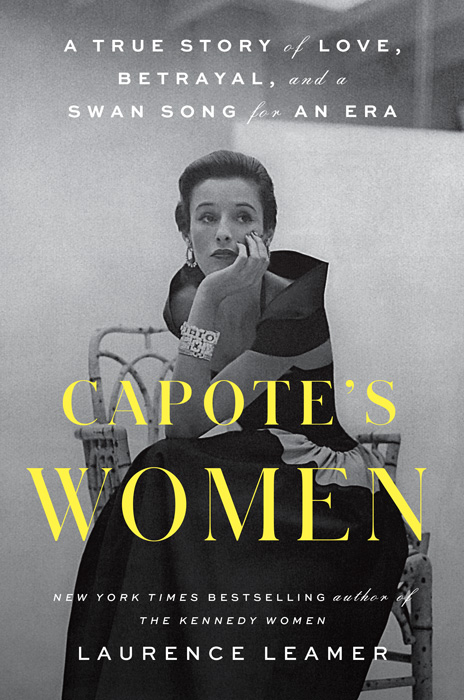 July 4, 2021: The true stories behind the socialites who deserted Truman Capote after he wrote about them in his unfinished novel, Answered Prayers, is coming out in October 2021. After a highly successful career as the author of the brilliantly written In Cold Blood and short stories and novellas like Breakfast at Tiffany's, Capote's career took a nose-dive, helped by copious amounts of alcohol, downers and spliff. His career was rejuvenated when Andy Warhol published some of his short stories as part of a series for Interview magazine, "Conversations with Capote" which formed the basis for Capote's best-selling Music for Chameleons.

Andy Warhol, had of course, been an early admirer of Truman Capote - see: FEBRUARY 1979: CONVERSATIONS WITH CAPOTE IN INTERVIEW and Andy Warhol Pre-Pop. (For more information on Warhol and Capote - type "Truman Capote" into the search box above and scroll down to a listing of pages this site.)

July 3, 2021: Below are my statistics for the first six months of the year. They average out at 159,846 hits per month. Thank you so much for all of your support. 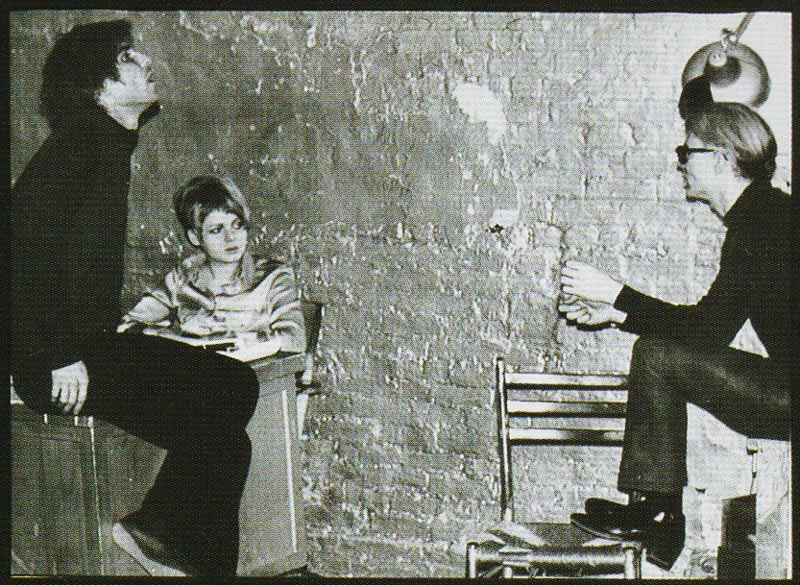 June 19, 2021: Allen Midgette died in his sleep on Wednesday, June 16, 2021 at 7:15 pm. Raymond Foye from Hanuman Books was with him on the night, although was not in the room when he passed. Prior to his death, Midgette had been diagnosed with a number of medical problems, including COPD and blockage of his arteries, but refused medical procedures and invasive testing, according to his friend, Sylvie Degiez who notes that "he died on his own terms, knowing that he was loved by countless people."

Although Midgette became famous for imitating Andy Warhol on a college circuit tour during the 1960s, he also appeared in films by Bertolucci and Pasolini. (According to Popism the college tour took place in 1967; according to Melody Maker it was in 1966):

"I knew as Andy you could answer a question anyway, and that the most ambiguous answer was the closest to being like Andy." (Allen Midgette quoted by Mary Harron in "Pop Art/Art Pop: The Warhol Connection," Melody Maker, February 16, 1980)

The Andy Warhol films that Allen Midgette appeared in included Lonesome Cowboys, The Nude Restaurant and films that were part of the screening of **** (Four Stars), notably Allen and Apple (filmed late January 67) (30 mins.) and Allen and Dickin (filmed 1967) (2 hrs.).

Allen Midgette was 82 when he died and is survived by a sister, Sylvia Taylor.

Both Warhol and Marisol exhibited at the Stable Gallery. She also appeared in a number of Warhol films including the Connecticut footage, Kiss, Bob Indiana Etc, and The Thirteen Most Beautiful Women.

In 1954 she also had a brief affair with Willem de Kooning. 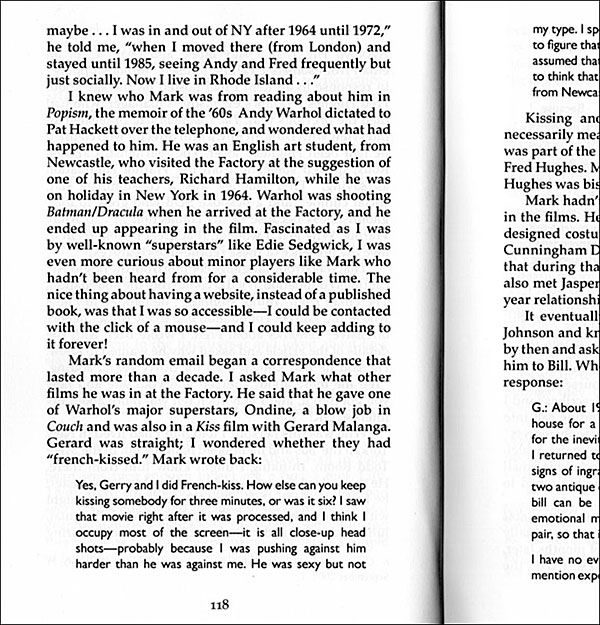 Mark Lancaster in The Real World

May 2, 2021: Sadly, I must report that Mark Lancaster died on April, 30, 2021 in Miami Beach, Florida. The years that I spent corresponding with Mark will always be special to me - a ten year correspondence that began when I first started the site. I've written about it in The Real World.

Mark is also mentioned in Popism - he's in several Andy Warhol films - Couch, Batman Dracula, and a Kiss film with Gerard Malanga. He was also Jasper Johns' lover for a considerable time and worked for Merce Cunningham. A selection of his art can be found on the ArtUk site.

My interview with Mark is here: Mark Lancaster interview.

ArtNet explains why Andy Warhol's Prince series is "Fair Use" 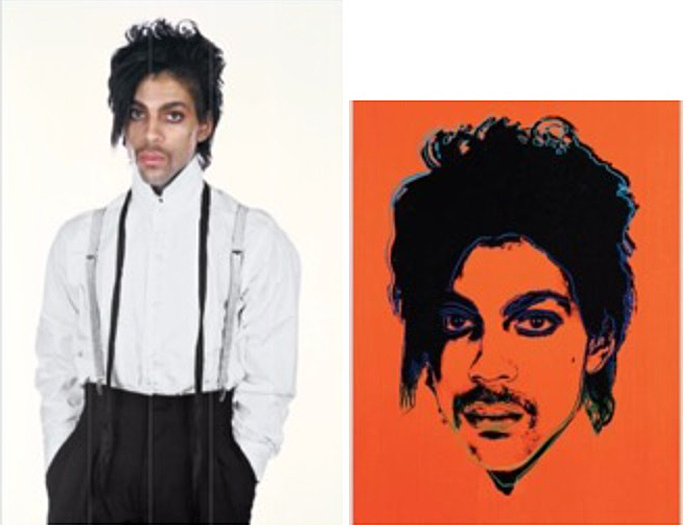 April, 28, 2021: In an op-ed piece in ArtNet, posted on April 27, 2021, it is explained why Warhol's Prince series is "Fair Use" of Lynn Goldsmith's photograph of the musical artist, Prince. The case is currently working its way through the courts. The Warhol Foundation won in the first Court, Goldsmith won in the second and the case is now on appeal to a third Court.

Given the extent to which other artists have used the imagery of their colleagues in the past, currently and historically (from Pablo Picasso to Richard Prince), a final legal decision in favour of Goldsmith could have serious and restrictive ramifications for artists in general. It seems ironic that someone who, presumably, identifies herself as an artist, would bring a lawsuit which could result in less freedom for the arts in general.

Goldsmith regularly puts her photographs on social media, where they can be shared without restriction. Although she couches her arguments against Andy Warhol's use of her photograph with references to 'rights,' I can't help but wonder whether her real impetus is 'money.' Ms. Goldsmith brought her suit after Warhol's image was used in an issue of Vanity Fair. She did not try to sue the artist when he was alive. 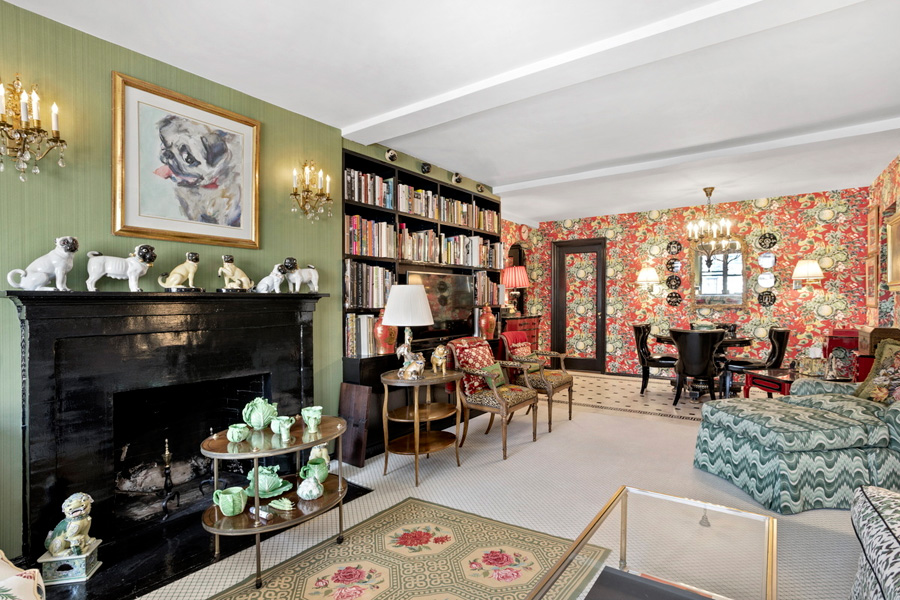 Second volume of the film cat. rais. is due in October 2021 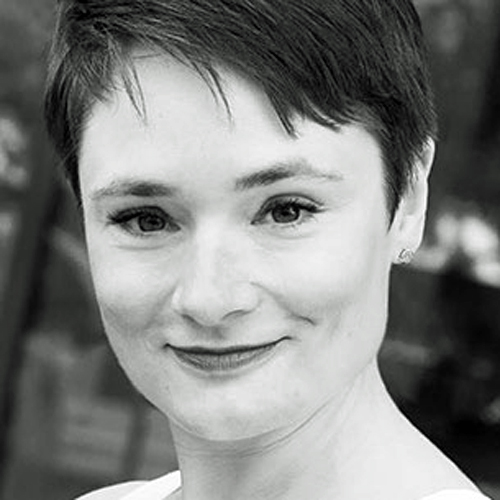 John Hanhardt is listed as the editor, with contributions by Bruce Jenkins and Tom Kalin. Let's also hope there is also a contribution by Claire Henry, given the amount of work she did at the Andy Warhol Film Project at the Whitney for more than a decade - both as the assistant of Callie Angell and afterwards. Over the years she has become the public "face" of the film cat. rais. project due to the amount of lectures she has given on the subject.

March 24, 2021: The New York Times has now published an obituary of David McCabe under the title "David McCabe, Who Photographed Warhol Becoming Warhol, Dies at 80." 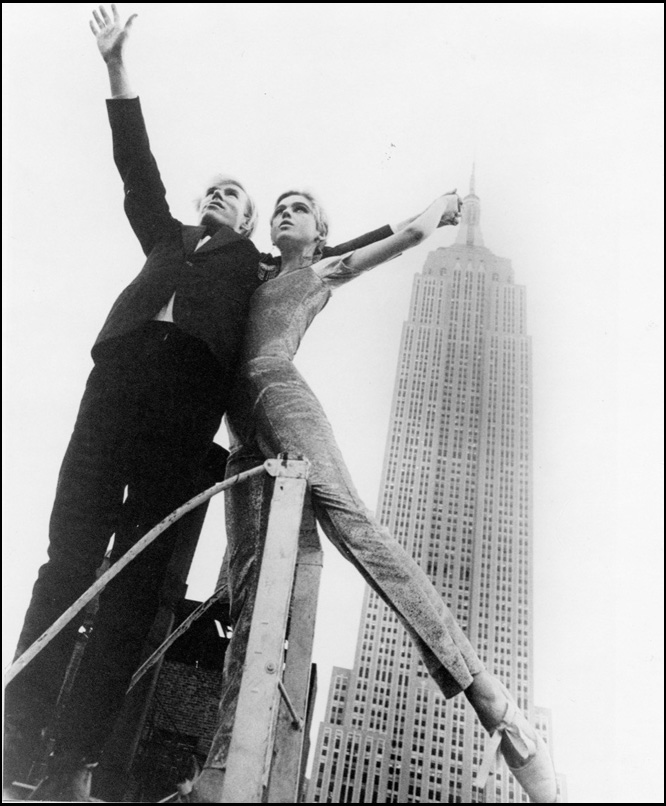 Andy Warhol and Edie Sedgwick as photographed by David McCabe

March 16, 2021: One death that went by largely unnoticed last month was that of the photographer, David McCabe, whose often used photographs of Warhol were published in the book, A Year in the Life of Andy Warhol. (Highly recommended). Born in 1940 in Leicester, England, he died on February 26, 2021. He took more than 2,500 photographs of Warhol and his crowd, many of which have never been seen. 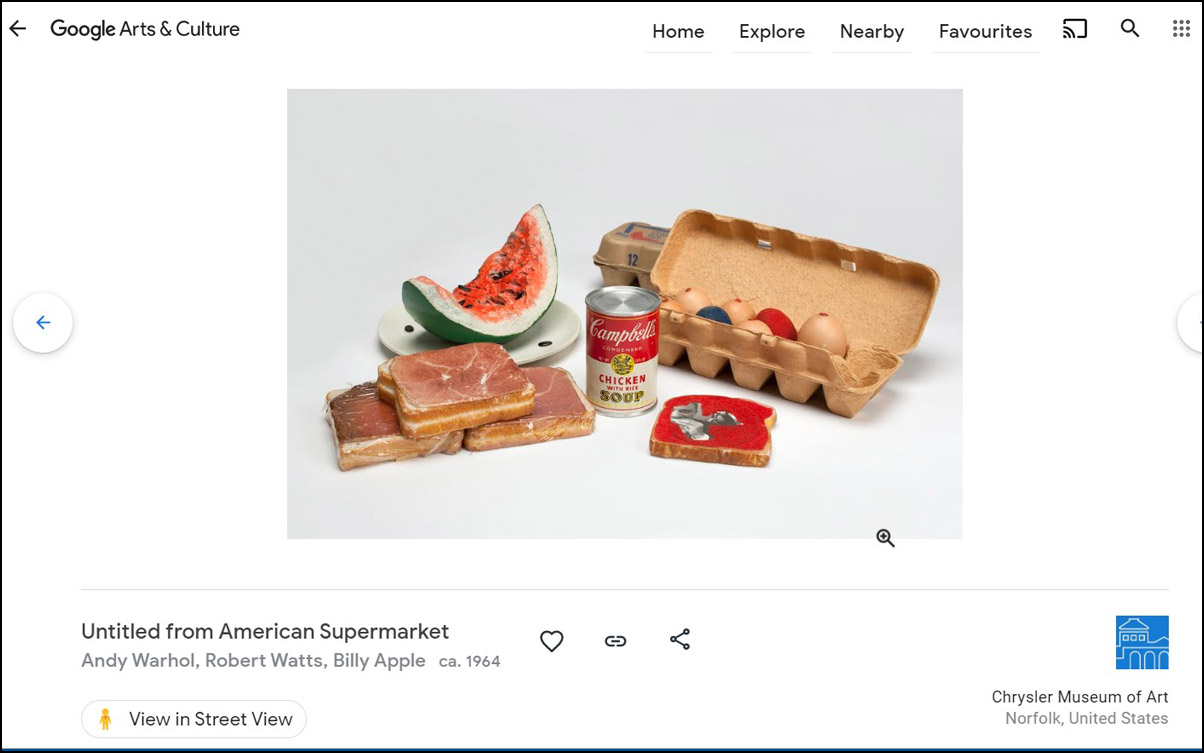 March 14, 2021: If you are still in lockdown and can only access art collections digitally, you might already be aware of Goggle Arts and Culture. It allows you to visit museums and view their collections by strolling digitally through rooms of paintings. Searching for "Andy Warhol," for instance, brings up a number of museum pieces, such as the untitled work above from the Chrysler Museum of Art. By clicking on "street view" you can see the whole collection. 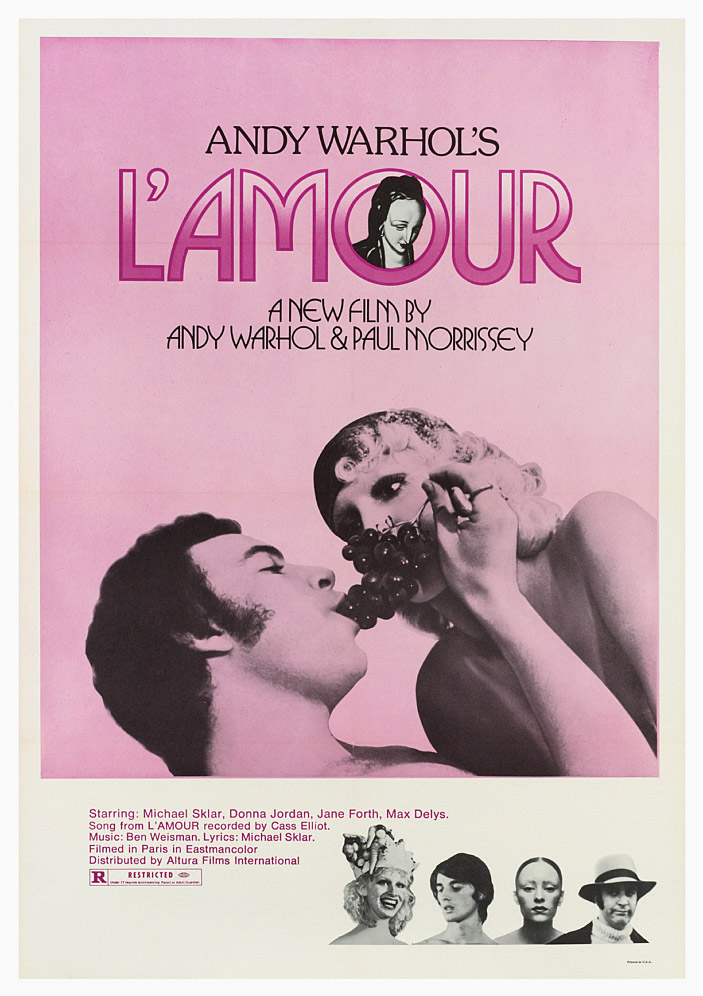 March 10, 2021: The Galerie Buchloz is advertising what appears to be a screening of Andy Warhol's rarely screened film, L'Amour. They don't actually mention a screening, they just reproduce the poster so it's unclear whether they are advertising an exhibition about L'Amour or showing the film itself. The exhibition is due to run Wed 24 Mar 2021 to Sat 17 Apr 2021.

The Ray Johnson exhibition will now open on November 26, 2021 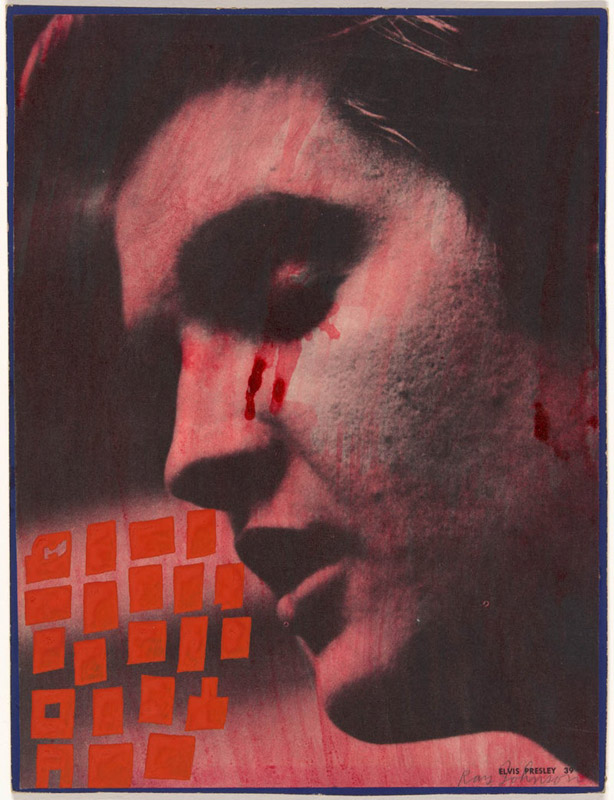 March 4, 2021: The Ray John exhibition, Ray Johnson c/o, will now open at the Art Institute of Chicago on November 26, 2021 and will run until March 21, 2022. The exhibition will consist mainly of works from Bill Wilson's collection (William S. Wilson).

The Warhol Museum to reopen today

January 2, 2021: The exhibition of photographs by Charles Henri Ford at Mitchell Algus will finish at the end of January. Ford was the editor of View magazine and the brother of the actress, Ruth Ford, who starred in Sartre's No Exit at the Biltmore. It has been claimed that Ford suggested Gerard Malanga as a person who could help Warhol with his silkscreeing. (Warhol had already started using the silkscreen process prior to meeting Malanga.)

January 1, 2021: Happy New Year from warholstars - 20 years now since the site first began. Thanks for all the attention and citations over the years - and thanks to all the regulars for continuing to access the site. It means a lot to me. Still working on the review of the biographies but it should be up shortly.

Studio 54 show still due to open at AGO