Joe Dallesandro to be honoured at Berlin Festival: New Joe film to be screened

A new documentary on Warhol star Joe Dallesandro is to be shown at the Berlin International Film Festival in February. Joe will also be given a special award by the festival in a ceremony on February 13, 2009. Last year the festival gave Tilda Swinton a similar award for her work with Derek Jarman.

The new documentary is titled Little Joe and is directed by Nicole Haeusser.

A preview of the new documentary on Warhol star Candy Darling has appeared on You Tube. The film, titled Beautiful Darling, is in the post-production stage. People interviewed for the film include Vincent Fremont; Bob Colacello; Gerard Malanga; Holly Woodlawn; Peter Beard; Sam Green; Melba LaRose Jr.; Julie Newmar; Michael J. Pollard and George Abagnalo (from Women in Revolt and the scriptwriter for Andy Warhol's Bad). Clips from the film were screened at the New York Film Academy in December 2008 by the film's director, James Rasin.

A selection of Warhol's Screen Tests, with newly commissioned soundtracks by Dean Wareham and Britta Phillips (formerly of Luna and currently recording as Dean & Britta) are due to be released on DVD on March 10, 2009. 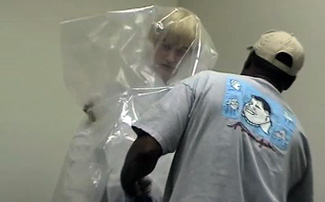 What about a robot?

The Fine Arts Museums of San Francisco and the father-son duo, Rene and Rio Yañez from SOMArts are searching for an Andy Warhol for a project in conjunction with the opening of the exhibition, Warhol Live at the "de Young Museum and Cultural Encounters:  Friday Nights at the de Young."

Auditions will be held on Saturday, January 31st, 2009 from noon to 5pm in the Piazzoni Murals Room at the de Young Museum, 50 Hagiwara Tea Garden Drive, Golden Gate Park in San Francisco.

They are casting multiple Warhols for various duties - public reception, posing for photographs, demonstrating silk-screening etc... Applicants should arrive for the auditions in costume, wig, make up and "attitude." Bring a resume and a 4 x 6 or 8 x 10 photograph - you'll be photographed in your costume.

To schedule an audition contact the public programs office at 415.750.7694 or e-mail nschach@famsf.org.

Brigid Berlin to appear at The Warhol Museum Saturday February 7, 2009

Warhol confidante and star of The Chelsea Girls, Brigid Berlin, will be appearing at The Warhol Museum in Pittsburgh on Saturday, February 7th. During the evening she will be opening one of Warhol's Times Capsules and talking about her time with the artist. Several months ago she was scheduled to appear at the South Bank Centre in London in conjunction with the Hayward Gallery's "Andy Warhol: Other Voices Other Rooms" exhibition but had to cancel due to health reasons and was replaced by Baby Jane Holzer - although contact was made with Brigid via an onstage telephone during the evening.

Brigid rarely leaves her New York apartment so the event at The Warhol is definitely not to be missed.

Andy Warhol from the Sonnabend Collection at the Gagosian Gallery

The press release quotes from Andy Warhol's last interview. The full interview (by Paul Taylor) can be found in the "Articles" section here.

Events include a lecture by Rudo Prekop on Andy Warhol and Czechoslavakia and a performance by The Velvet (Underground) Revival Band.

The first two performances of Josh Kornbluth's one-man show Andy Warhol: Good for the Jews? at the Contemporary Jewish Museum in San Francisco are now sold out. There are still tickets available for the performances on January 11, 17 and 18. The show is running in conjunction with the exhibition "Warhol's Jews: Ten Portraits Reconsidered."

Four days left to listen to Femme Fatale: The Story of Nico

BBC Radio is broadcasting their radio documentary on Warhol star Nico called Femme Fatale: The Story of Nico for the next four days (until January 12th) on the BBC iplayer.

The National Portrait Gallery in Washington, D.C. will be hosting an exhibition on Marcel Duchamp and portraiture, including work by Andy Warhol, from March 27, 2009 to August 2, 2009.

The U.S. premiere of the new documentary on Fluxus artist Al Hansen will take place at the Anthology Film Archives on Sunday, January 4th, at 6:00 pm. Hansen was the father of Warhol star Bibbe Hansen who appeared with Edie Sedgwick in Prison and Restaurant. (Bibbe also recently participated in a panel discussion at the South Bank Centre in London in conjunction with the Hayward Gallery's current Warhol exhibition, "Andy Warhol: Other Voices Other Rooms.") During the '60s Warhol contributed to Hansen's underground newspaper Kiss - "the paper you read with one hand."

The battle for the Chelsea Hotel reaches the Independent

The Independent newspaper in England featured an article on the battle for the Chelsea in their Sunday, January 4th issue.

The article can be found here.

I have today added to the site an 'interview with Andy Warhol' originally published in Cavalier magazine in 1966 under the title "Inside Andy Warhol." In the interview Warhol mentions the films Sleep, Empire, Eat, Tarzan and Jane Regained...Sort of, Jane Eyre and something called Breathe. The script for "Jane Eyre" was written by Ronald Tavel in late 1966/67 under the title Jane Eyre Bare but was never filmed.

Warhol also refers to the Norelco video equipment that was loaned to him that year (which he used in the filming of Outer and Inner Space), but which had been returned by the time of the interview.

Chuck Wein and Ondine also show up during the interview. Wein, who refers to himself as Warhol's scriptwriter in the interview, mentions Poor Little Rich Girl and films apparently titled Party and It Isn't Just Another Afternoon.

The interview is here.

Factory People to be shown in the U.K. 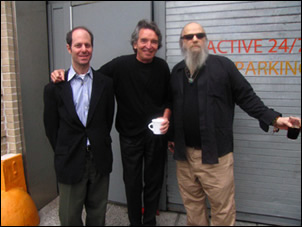 The three-part documentary on Warhol and his cohorts, Factory People, will be broadcast on Sky Arts in the U.K. beginning January 7, 2009. Interviewees include Gerard Malanga, Victor Bockris, Billy Name, Taylor Mead, Jonas Mekas, Ultra Violet, Holly Woodlawn and the usual cast of characters. A review of the film appeared in the Los Angeles Times when it was broadcast on Ovation TV in the states in November 2008. The review can be found here.

The documentary will also be released in DVD format in the U.S. on March 2009.

Details of the U.K. broadcast can be found at here.

An exhibition of Stephen Sprouse's work opens at Deitch on Wooster Street in Manhattan on January 9, 2009 - the same day that a Liz Renay exhibition opens at the Grand Street location.

I have added to the site a page for Warhol star Freddy Herko whose films for Warhol included Rollerskate, Haircut and Thirteen Most Beautiful Boys.

Andy Warhol (via Pat Hackett in POPism: The Warhol Sixties):

The people I loved were the ones like Freddy, the leftovers of show business, turned down at auditions all over town. They couldn't do something more than once, but their one time was better than anyone else's.

The Freddy Herko page can be found here. (Once you get to the page, scroll down for links to Freddy Herko info.)

Candy Darling - a a confectionary shop named after the Warhol superstar - opened in San Francisco in December.

The shop, located at 798 Sutter Street, features Candy Darling truffles, caramels, dipped fruits and other sweets, all made on the premises, for the bargain price of $10 a pound.

The Grand Palais in Paris (pictured above) will be presenting "Le grand Monde d'Andy Warhol" from March 18 - July 6, 2009. The exhibition will consist of almost 150 works by the artist including Self-Portraits, Screen Tests, Mao, Disaster and Last Supper paintings.

John Cale at the Venice Biennale

Ex-Velvet Underground member, John Cale, is to represent Wales in the Venice Biennale in 2009. Cale will produce a specially commissioned installation for the exhibition - an audio-visual work made in Wales in collaboration with other artists, filmmakers and poets. The work will fill the Capannone space at the Ex-Birreria, an old brewery building on the island of Giudecca.

Taiwan News has announced that "A retrospective exhibit of 121 works by Andy Warhol, the father of American pop art, will open at the Chiang Kai-shek Memorial Hall in Taipei on January 1, 2009."

The traveling exhibition, "Warhol Live," opens at the De Young Museum in San Francisco on February 14, 2009 and continues until May 17, 2009.

Interview magazine has re-launched its website. Although sections of the site are yet to be introduced, it promises archives, a calendar of events, blogs, a "just captured" section where you can upload photos from your cellphone and "cultural roulette" where you can click a button and an article is chosen randomly for you.

The site can be found here.

Warhol star Billy Name has served as the creative director for The Kymara Gallery's Christmas installation in the dining room of The Victoria Mansion Portland, Maine. The mansion is a Victorian era house museum designed in the Italianate style with original interiors by Gustave Herter.

A fantasy masked Christmas eve dinner has been created in the Victorian Turkish style. Billy's unique sense of design was the driving force in the creation of the room's decorative concept as well as its focal point, a period style gown boasting a train of 800 peacock feathers. He has also designed the tree's unique lavish moon and star ornaments.

The room may be viewed at The Victoria Mansion, 109 Danforth St. Portland, Maine, November 28-December 31, 2008 11-5 Tuesday- Sunday. The gown and ornaments will be on display at The Kymara Gallery at The North Dam Mill, 2 Main Street, Biddeford, Maine January 2nd to Feb 2nd and at Cafe Bocca, Poughkeepsie, NY February 12th to March 12th.

London superstar panel on You Tube

Footage from the recent panel discussion of Andy Warhol's Superstars at the South Bank Centre in London has appeared on You Tube. To play, click on the photo below or go here.

The panel discussion was presented in conjunction with the Hayward Gallery's current Warhol exhibition: Andy Warhol: Other Voices Other Rooms. The exhibition continues until January 18, 2008. Details on the Hayward's website here.