Ultra meets Andy | I, a man | Conquest of the Universe 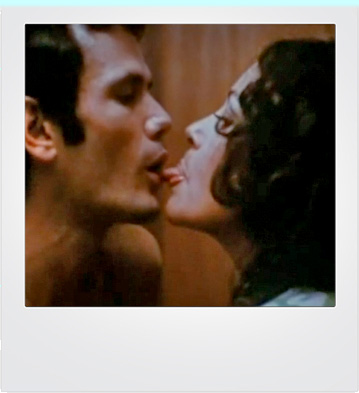 Ultra Violet and Tom Baker in I, a man

Ultra Violet's art was included in the Audart exhibition commemorating the tenth anniversary of Warhol's death in 1997. In August - October 2004 she exhibited at the Washington County Museum of Fine Art and during 2004/05 her work was shown at the Gallerie Ferrero in Nice. Her work was also included in the Andy Warhol birthday exhibit at the Shoreham Hotel in 2005 and exhibitions in Houston, Paris, Seattle and the Czech Republic in 2006.

Ultra is sometimes referred to as having been romantically involved with the artists Salvador Dali and John Graham. Graham's correspondence with Ultra is among his papers in the Smithsonian's Archives of American Art. (See "R.I.P. Ultra Violet.")

After her time with Warhol, she became a Mormon:

"She [Ultra Violet] told me of how after a near-death experience due to illness, she began to seek for a higher truth and a higher power than that promised by the impresario of fame and glamor...and how in her search she encountered two Mormon missionaries who changed her life. She received a burning testimony of the truthfulness of the restored Gospel and Joseph Smith as true prophet of God and the instrument thru which the truth was restored upon the earth in these latter days. She told me of how the Holy Ghost came upon her and revealed the error of her ways and how the light of truth shined upon her and so she underwent a spiritual transformation. She saw the error of her ways, and she was born again. Thus she left behind the life of sex and drugs and partying and debauchery and sin. Through her conversion Ultra emerged a latter-day saint. And from that day on, she was an active and upstanding member of the LDS Church, humbled by her calling as the Homemaking Leader in the Relief Society of the Manhattan ward...

When I pressed her again to tell me about the people she knew, such as Duchamp, her only response was: 'Too much homosexuality.'"