BW/Silent/39 mins at 16 fps
Starring: Robert Indiana and his cat (not to mention the mushroom) 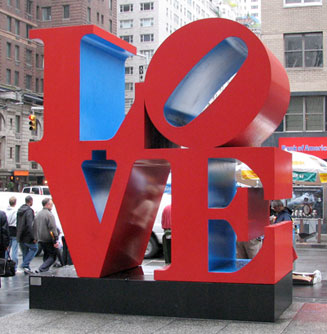 Andy Warhol was with Eleanor Ward's Stable Gallery in New York from the end of '62 to early '64, along with Robert Indiana who exhibited his Eat paintings and sculptures there. Eat features both Indiana and his cat who sits on his shoulder during two rolls of film.

According to Robert Indiana, Andy shot Eat in Indiana's studio on Coenties Slip in lower Manhattan on Sunday, February 2, 1964. Just prior to this, at the end of January, Allan Kaprow had staged an "environment" or Happening also called Eat at the former Ebling Brewery in the Bronx. (FAW13) (The Stephen Koch/Jonas Mekas filmographies incorrectly list Eat as being filmed in November 1963).

Robert Indiana also constructed a flashing electric Eat sign on the outside of the New York State Pavilion at the New York World's fair which opened on April 15, 1964. The sign had to be turned off, however, because it attacted too many hungry tourists looking for a place to eat. (FAW13)

The night before appearing in Warhol's film, Indiana had seen the film Tom Jones. Inspired by the movie's "orgiastic eating scene," he had starved himself before the filming, bringing along a large amount of fruits and vegetables to eat. Instead, Andy asked him to slowly eat just one mushroom. Andy shot nine 3 minute rolls of film which he assembled out of sequence so that there is no direct relation between the time spent eating the mushroom and how much of it is left. The film is about watching somebody eating. How much is actually eaten at any one point of time is irrelevant. The focus is on the image and not the narrative.

Eat was first shown on July 16, 1964 by Jonas Mekas at the Washington Square Gallery at 530 West Broadway, along with an unannounced first showing of Blow Job. In September 1964, a 4-minute excerpt from Eat was shown on 8mm rear-screen loop projectors, along with 4 minute excepts of three other films, Sleep, Haircut and Kiss, at the New York Film Festival, with a soundtrack by La Monte Young. A 100 foot 16mm excerpt from Eat was included with similar length excerpts from Sleep, Haircut and Empire and distributed as a sampler by the Film-Markers' Cooperative. (FAW14)