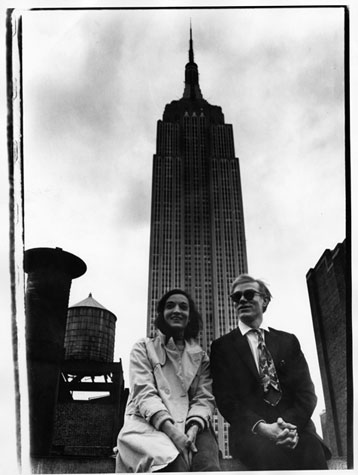 Okay. It's freezing in New York. I'm staying at the Gershwin, a Midtown hotel straight out of Raymond Chandler. They are having a Warhol festival, everyone gets a free silver wig and a pair of Wayfarer sunglasses. All week, there are two to three of Andy 's early black-and-white films running 24/7 on the lobby walls. It's 2 a.m. and on the wall beside me is the Empire State Building. I want to go to bed, but instead, I sit down and my brain floods with feelings about the past when Daddy took us to the top of the tallest building in the world, about America, my tragic country that was great but is not great anymore, and about the city I can no longer afford to live in. All this takes about three seconds because I promised myself a long time ago I would never cry in a hotel lobby. But the building continues to demand my attention. And, unlike a painting, it is not dead. It's living, like a window that sees only the past. 'This is brilliant,' I blurt out, and four different people tell me to shut the fuck up. But my brain is bubbling over. I realize that Andy never meant to do a film. he was doing a painting. Pop art put the image back in painting and Andy took it even further and put the image on film instead of canvas. He wasn't directing, he was painting. It's only taken me 40 years to realize that these films were never meant to screen in a theater, where I thought they were boring. They were meant to hang on a wall. They are Andy's greatest paintings.
(MX)

Empire was filmed on the night of July 25-26 from 8:06 pm to 2:42 am, from the offices of the Rockefeller Foundation on the 41st floor of the Time-Life building. According to Gerard Malanga, "It was John Palmer who came up with the idea for Empire. John, Jonas Mekas and I changed the reels for Andy. He barely touched the camera during the whole time it was being made. He wanted the machine to make the art for him." (See MoMA)
(L&D207/FAW16)

On a somewhat hazy afternoon - Saturday, to be exact, 25 July 1964 - a group - Andy Warhol, Gerard Malanga, Jonas Mekas, Marie Desert, and John Palmer - enter the Time-Life Building, corner of 50th/Avenue of the Americas, with bags and boxes of camera equipment in tow, and ascend to the 44th floor headquarters of the Rockefeller Foundation, to be met at the front door by Henry Romney, a Vice-president of the foundation. Henry ushers us into his office, which offers an unobstructed view of the Empire State Building, 16 blocks to the southeast. After a few minutes of schmoozing, we begin breaking out the equipment, separating cables, film-loading bags, tripod, and boxes of Eastman Kodak raw stock, and with meticulous care, fix the Auricon camera onto the tripod's metal plate. This is the first time Andy would make use of this highly professional, though antiquated piece of equipment. (GMW85)

The film begins with a totally white screen and as the sun sets, the image of the Empire State Building emerges. The floodlights on its exterior come on, the building's lights flicker on and off for the next 6 1/2 hours, then the floodlights go off again in the next to the last reel so that the "remainder of the film takes place in nearly total darkness. (FAW16)

According to Gerard Malanga, the first two reels were actually overexposed because "Andy was exposing for night light, but it was all guesswork." (L&D207)

Andy used a camera with sync sound for the first time in Empire. According to Victor Bockris, Jonas Mekas "had brought the Auricon newsreel camera he had just used to film the Living Theater's production of The Brig. (L&D207). According to Gerard Malanga , the Auricon had been rented from F & B Ceco on West 43rd Street - the rental arranged by John Palmer. (GMW90)

The Auricon, a 16mm single-system sound camera, had the distinct advantage of accommodating a 1200-foot magazine, allowing for a 35-minute take at the flick of a switch. Ironically, the camera was chosen not for its sound capacity, but in cutting time while reels were being changed to assimilate the nearly exact ratio of reel time to real time, as first theorized by John [Palmer] - '1 to 1' - adhering to a Warholian principle already established to an initial degree with the film, Sleep a year earlier. (GMW90)

Empire was originally intended to be a sound movie with Henry Geldzahler, Gerard Malanga, Jonas Mekas and John Palmer talking in the background. (L&D206) John Palmer had been a student at the same college as Gerard Malanga - the Wagner Memorial Lutheran College, Staten Island, New York. During his senior year in 1963, Gerard was editor of the college's literary magazine and John Palmer had contributed some writing. John Palmer would later go on to direct and write (along with David Weisman), the non-Warhol film, Ciao Manhattan starring Edie Sedgwick.

John Palmer, a young filmmaker, should rightly be credited with the concept for the film, Empire. It was John's ingenuity and proficiency that most impressed Warhol to go ahead and rent the movie camera needed to see this project through. John was considered something of a 'wunderkind' among the underground filmmakers, like Ron Rice, Jack Smith, and Harry Smith... It was also through John's acquaintance with Henry Romney, that we would secure Henry's office for the making of the movie. John had met Henry through Frederick Eberstadt, a society photographer he assisted shortly after arriving in New York from Hartford, fresh out of high school. (GMW88/90)

During the filming, the lights in the office from which they were shooting were temporarily left on. In the beginning of three reels, images of the film crew can be seen reflected in the window, next to the Empire State Building. Warhol's reflection appears at the beginning of Reel 7. (FAW17)To "break the monotony" of the filming, Gerard Malanga "decided to notate a few minutes worth of conversation verbatim".