The person getting the blow job in Andy Warhol's film of the same name was DeVerne Bookwalter who had earlier appeared in the Shakespeare in the Park production of Macbeth in the summer of 1963.

Andy Warhol also filmed a Screen Test of Bookwalter in 1963 which was part of The Thirteen Most Beautiful Boys - a film compilation of Screen Tests that was shown privately at the Factory.

According to Callie Angell in Andy Warhol Screen Tests: The Films of Andy Warhol Catalogue Raisonné, "the only references to a public showing of The Thirteen Most Beautiful Boys mention a screening at the New Yorker Theatre on December 7, 1964, when Film Culture magazine presented its Sixth Independent Film Award to Warhol." (AD41/245)

In a lecture given at the ICA in London in 2002, Gerard Malanga identified the off screen person giving the blow job as Willard Maas. (GML) Maas was an English professor at Wagner College in Staten Island and a friend of Gerard Malanga. He had secured a fellowship for Gerard so that Malanga could attend the college beginning in October 1961. (GMW23)

Maas was married to the filmmaker Marie Menken who appeared in various Warhol films including a Screen Test (1966), The Life of Juanita Castro (featuring a script by Ronald Tavel) and The Chelsea Girls. Warhol filmed Maas for a Screen Test in 1965. (AD118)

Maas' stormy, alcoholic-fueled relationship with Menken may have been the inspiration for Edward Albee's play, Who's Afraid of Virginia Wolf, although it has also been rumoured that the play was based on Albee's own alcoholic-fueled homosexual relationship with Bill Flanagan. Although a friend of Bill Flanagan's thought that Martha sounded like Flanagan, Flanagan denied the "homosexual interpretation" of the play.

"With Virginia Woolf all hell broke loose, especially after people began to think that the two characters of Martha and George were really myself and Edward. There was a friend of mine - this boy in Detroit - who had never even met Edward. And he came to New York and he saw the play, and was absolutely horrified with disbelief at the character of Martha because it sounded to him like the way I talked and behaved... The whole question of the central characters really being two men is really not germane. Certainly, nobody has ever demonstrated it from the text. Unless you can demonstrate that indeed this is true, there is no proof... I honestly believe that if the rumor mills had not started churning, everybody would have gone to that play and taken it at face value. The homosexual interpretation only came along later." (PO115-6)

According to Andy Warhol and Pat Hackett in Popism, Charles Rydell was originally asked to appear in Blow Job. Popism indicates that Warhol rang Charles Rydell and asked him to star in the film, telling him that “all he’d have to do was lie back and then about five different boys would come in and keep on blowing him until he came,” but that the film would only show his face. (POP50)

Charles agreed, but when he didn't show up for the following Sunday afternoon shoot, Andy reached him at Jerome Hill’s suite at the Algonquin and screamed into the phone “Charles! Where are you?” Charles responded: "What do you mean, where am I? You know where I am - you called me,” and Andy then said “We’ve got the camera ready and the five boys are all here, everything’s set up!” Charles's shocked reply was: “Are you crazy? I thought you were kidding. I’d never do that!”

Charles Rydell and Jerome Hill (a filmmaker, artist and patron of the arts) are referred to as lovers in Fred Lawrence Guiles' biography of Warhol. (LB409) They also became part owners of Interview magazine for a period in the early seventies, purchasing John Wilcock's share of the magazine. Jerome Hill's nephew was the photographer, Peter Beard. (BC42/56)

Although Rydell did not appear in Blow Job, Warhol filmed him for three Screen Tests in 1964. (AD169-70) According to POPism: The Warhol Sixties

, Warhol initially met Rydell on his first day in New York in 1949 and later ran into Rydell at a screening of Warhol's film Tarzan and Jane Regained, Sort Of... at Jerome Hill's apartment at the Algonquin Hotel.

"A young actor by the name of Charles Rydell was at that Tarzan screening. We had a mutual friend named Nancy March who'd introduced us in the pouring rain on my first day in New York years before. Charles had been working in Nedick's then, and I was just off the bus from Pittsburgh, but I hadn't seen him - at least, not to talk to - since." (POP46)

According to Warhol biographer, Fred Lawrence Guiles, Charles Rydell was a friend of Victor Reilly who Warhol knew from Carnegie Tech. Guiles indicates in his biography of Warhol that Rydell and Reilly met up with Warhol "within hours" of Warhol arriving in New York in 1949, but does not mention a "Nancy March." In fact, no other biographical accounts of Warhol refer to anyone with that name.

Fred Lawrence Guiles (from Loner at The Ball: The Life of Andy Warhol):

"One of his [Andy Warhol's] old friends from Carnegie Tech's modern dance group, Victor Reilly, met Andy within hours of his arrival at Penn Station. An actor friend, Charles Rydell, accompanied him, and Andy made no secret of the fact that he though Rydell was sensational-looking... Within a few years Rydell was in the off-Broadway musical The Threepenny Opera, and in the 1960s he was cast as Hercules in the Broadway musical By Jupiter.

He described Andy then as being 'like a machine in that he never said much, although when you got to know him well, he would joke... I do remember we went to a restaurant... then we just walked. I remember us walking along Central Park West and talking, in pouring rain. At Andy's memorial service, I told somebody that I met Andy on his first day in New York and that he was so boring I didn't see him again for ten years. I was just joking...'" (LB49-50)

Although Guiles mentions that Victor Reilly was, like Warhol, a member of Carnegie Tech's modern dance group, Reilly does not appear in a photograph of the dance group - which includes Warhol in the front row of the photo. 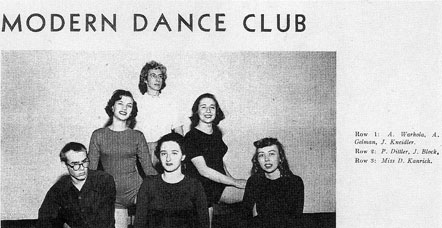 Reilly does, however, appear in a photograph of Warhol and other members of Carnegie Tech who were sharing an apartment at 103rd Street in 1950 - see here.

"That was my apartment [in Eating Too Fast] when I lived in the Village. Lou Reed was there, and Andy was there. I saw it in the Film-Maker's Co-Operative catalogue and rented it. There wasn't any written dialogue. They would just have the sounds, as so often in the experimental early films. The dialogue was just whatever happened to come up. You know? Sometimes Warhol or somebody would set up provocations, which might stimulate dialogue in one way or another but not direct it." (PS214)