The New York Times review of Vain Victory appeared in the August 25, 1971 of the issue:

Review of Vain Victory by Mel Gussow in the New York Times, August 25, 1971

The full review reads as follows:

"Dark Victory." "Bright Victory." "Victory at Sea." And now we have "Vain Victory: The Vicissitudes of the Damned c. 1971," the latest furbelow from Jackie Curtis.

To call "Vain Victory" terrible is simply to confirm what is endemic to the work. This transvestite musical spectacle currently inhabiting the WPA Theater on the Bowery is unabashed trash. It is the quintessence of Camp, taking the pop culture of another era, specifically band movie-musicals of the nineteen-forties, and deforming it in its own image.

Although there is some superficial similarity - in the garishness of the design - to the work of Charles Ludlam and his Ridiculous Theatrical Company, "Vain Victory" does not even try to raise the level of the material, to turn it, as Ludlam does, into myth - and art.

The songs (written by Curtis and five collaborators), such as "White Shoulders," "Sally From Tin Pan Alley," and "Uruguay," could have been snipped from the soundtracks of those giddy musicals. "Uruguay," for example, is sung, bananas-on-head, hips-at-a-wriggle, by Mario Montez as a character named Mala Femina. I never thought I would see a show in which Montez was the best actor - but here it is. He is, at least, the most convincing woman on stage, which in "Vain Victory" might not be considered a compliment.

One is always conscious that these are men in drag, even in the case of Candy Darling, the most gorgeous "lady" in the cast. Stockings are torn, bodices are slack and occasionally a falsetto is dropped. These actors are not imitating but aping.

Curtis, who also wrote "Heaven Grand in Amber Orbit," through sheer lack of competition might be considered America's foremost transvestite playwright. This time he is a man-manqué Blue Denim, a rock singer turned movie star. In gym-like jumper, his hair shorn and gold dust spattering his face, he looks like a prettified Peter Pan.

The play was performed at the WPA until September 12, 1971, according to an ad in the Village Voice: 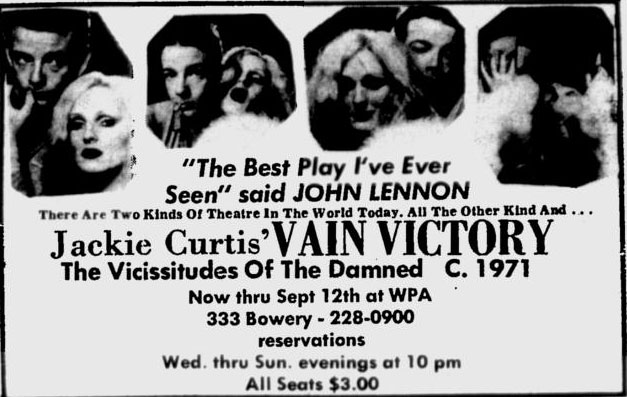 The quote on the ad from John Lennon may have been real. According to Craig Highberger, John and Yoko attended the play.

One evening less than a half-hour before curtain a frantic call came to the box office The audience was informed that the show would be starting late because John Lennon, Yoko Ono, and party who had reserved the entire front row were running late at an uptown restaurant. (JCP3544)

It's unknown which production of the play Yoko and Lennon attended, assuming that they did attend. After closing at the WPA on September 12, the play re-opened Wednesday, September 21 at the Village Arena, according to an ad in the September 16 issue of the Voice: 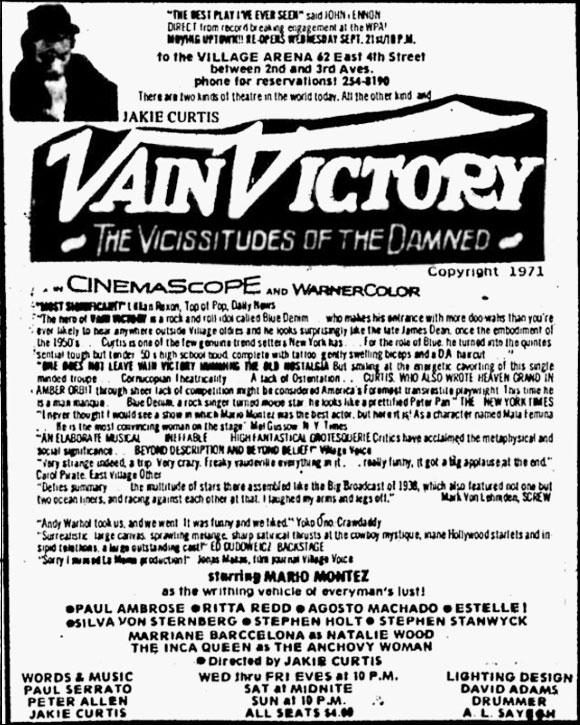 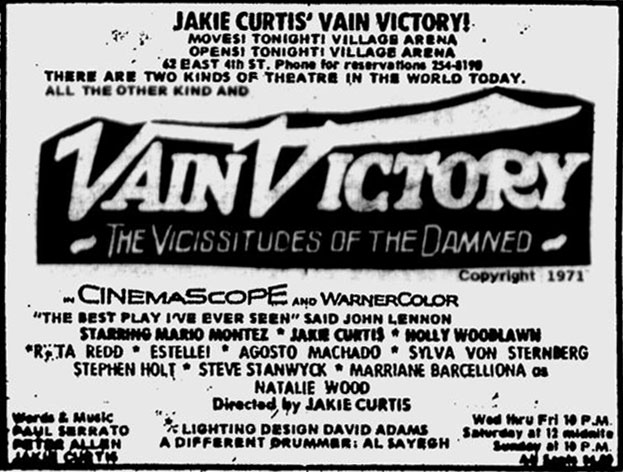 The cast appears to have changed considerably between the WPA and Village Arena productions. Eric Emerson is no longer involved and he or his band members (the Magic Tramps) are no longer credited under "words and music." By that time they were pursuing an independent musical career. They performed at Max's Kansas City billed as "Messiah with Eric Emerson" on September 29th and 30th and October 1-3. (See "Wonderboy: The life, loves and death of Eric Emerson," p. 4.) Candy Darling is also no longer listed on the ad for Vain Victory. 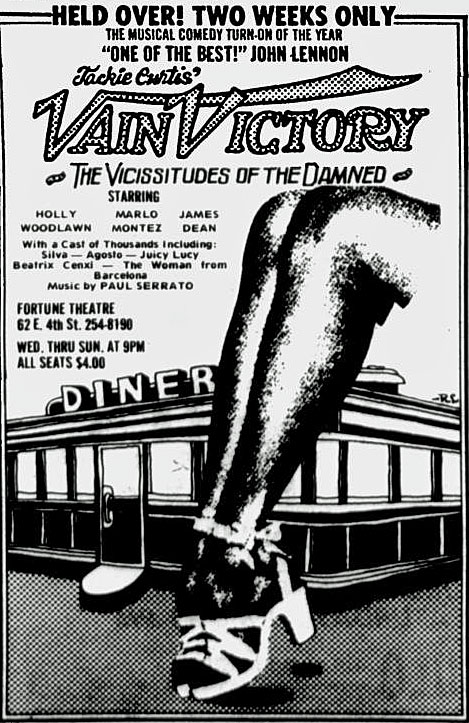 The final ad for the play, at any venue, appears to be in the November 11, 1971 issue of the Village Voice - with the play still at the Fortune Theatre. 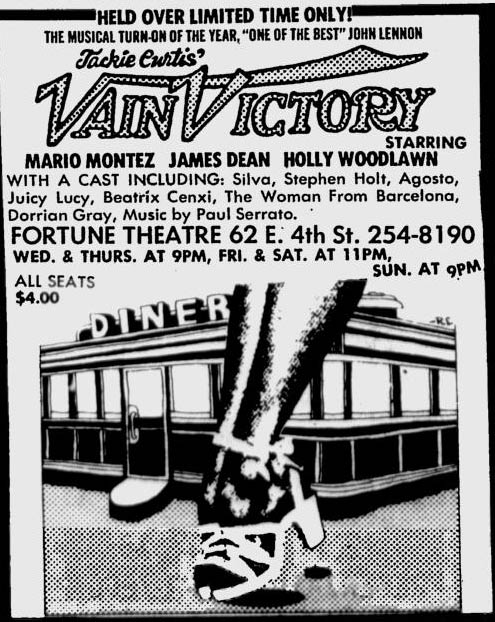 Although Vain Victory may have been Jackie Curtis' longest running play (although not at the same venue), the script was written while he was doing copious amounts of speed (amphetamine) and it is practically unintelligible. The play's success largely depended on the druggy performances of its "camp" cast. Despite the negative review in the Voice and the mixed review in the Times, it still managed to attract an audience. As the play went from venue to venue there were numerous cast and script changes. Holly Woodlawn noted in her autobiography that "the same audience kept coming back because they wanted to see what changes had taken place."

... Jackie Curtis was kicking up her heels in a play called The Vicissitudes of the Damned at the La MaMa Theater in the East Village. Candy was in in it too, playing a mermaid in a wheelchair. I saw it and thought it was speed-freak lunacy. All my girlfriends were bombed on stage and having a good time...

Then Candy dropped out of the play and Jackie asked me to play the lead. Of course I accepted, and once again my self-esteem was boosted from the depths of misery to the lighted marquee of the theater! Estelle, Silva Thin, Curtis, and I would get bombed in our dressing rooms and then go out onstage and act like crazed banshees. One night I rolled out in the wheelchair for my entrance and rolled right off the stage! I landed in the front row on top of Miss Candy Darling, of all people! Candy had come to see the show that night, just to see how I was doing. She was horror-stricken.

Miss Curtis' plays were in a constant state of change, and she would often rewrite herself into a stupor. She came up with new lines every night, and the same audience kept coming back because they wanted to see what changes had taken place. One night I sprouted legs. And the next night I was back in the wheelchair. There was always something going on.

But honey, the real show was in the dressing room. Estelle would be carrying on with a vodka bottle in her hand while Jackie and I shot up in the corner, rehearsing over a bottle of Southern Comfort while Silva Thin chattered. (HW198)