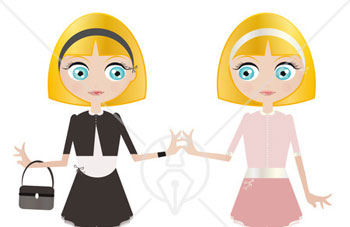 Damien Hirst is seeking identical twins for an installation at the Tate Modern's upcoming show, "Pop Life: Art in a Material World." The exhibition was previously titled "Sold Out." (The title was presumably changed because punters would think the show was, in fact, sold out.) In addition to Hirst, the show, which runs October 1, 2009 - January 17, 2010, will feature work by Andy Warhol, Jeff Koons, Takashi Murakami, Cosey Fanni Tutti, Keith Haring, Tracey Emin, Richard Prince, Martin Kippenberger and David Hammons. According to the Tate Modern's blurb for the show, the exhibition (which is still called "Sold Out" on their website) "will propose that the most radical lessons of the movement have emerged in the way artists in our time have not simply represented or commented upon our culture of mass media but have flagrantly participated in commercialism and infiltrated the publicity machine as a performative strategy."

A figurative work by Philip Guston, Anxiety (1975) topped Thursday evening's contemporary art auction at Phillips de Pury & Co., fetching $1 million (including fees). Although usually associated with Abstract Expressionism, Guston returned to figuration in about 1966, going on a drawing spree based on everyday objects. Anxiety features a telephone and a bacon and egg sandwich against a pinkish background. Guston died in 1980, after having suffered a major heart attack the previous year.

A short interview with former Interview editor, Bob Colacello, has been published in the May 11, 2009 issue of Time Out Dubai. In the interview Colacello describes Warhol as "very voyeuristic and mean, but he was also very touching, and sad and sweet." One of the reasons he left Warhol's company was apparently Fred Hughes: "I once witnessed Fred Hughes trying to strangle Andy on the way home from a party in Paris. That was one of the reasons I left." Colacello recalled the strangling incident in the book he wrote after leaving Warhol, Holy Terror: Andy Warhol Close Up. In his book he attributed Hughes' erratic behaviour to Hughes' drinking problem, but when he (Colacello) suggested to Warhol that Hughes should go to a "drying-out clinic," Warhol responded "Fred doesn't have a problem. You just get too uptight, Bob. You should have a drink."

Colacello was in Dubai to autograph copies of his book Bob Colacello: Out. You can read the full interview with him here. 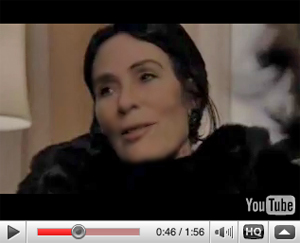 Mary Woronov: "We're from the desert you know."

Warhol star Mary Woronov's latest film, House of the Devil, premiered at the Tribeca Film Festival in April and is due to be shown at the Marché du Film (Festival de Cannes) on May 15, 2009. Woronov made a special guest appearance at the Tribeca festival for the premiere of the film - photos here. A video interview with Woronov and two of the other stars of the film, Tom Noonan and Jocelin Donahue, can be found here.

Films by Andy Warhol that Mary appears in include seven Screen Tests, Hedy, Whips, Kiss the Boot, The Beard, The Chelsea Girls, Superboy, The Velvet Underground Tarot Cards, Since, and Ivy in Philadelphia (included in **** Four Stars). Excerpts from a 1973 interview with Woronov from Interview magazine can be read here. A recent exhibition of art by Woronov (who studied art at Cornell University) can be viewed here. 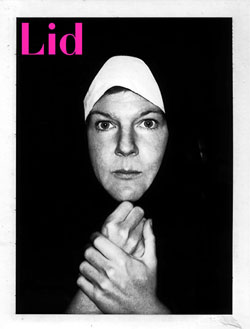 The current issue of Dagon James' magazine, Lid, includes an interview with Warhol star Brigid Berlin (The Chelsea Girls, Imitation of Christ, Tub Girls etc.), along with a portfolio of some her previously unpublished Polaroids. The issue features several different covers which can be seen on the Lid website. 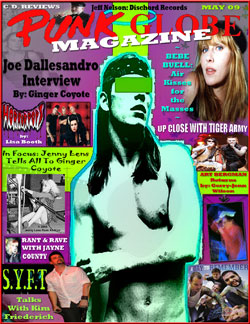 A short interview with Joe Dallesandro (whose films include Flesh, Trash and Lonesome Cowboys) by Ginger Coyote has been published in the online magazine, Punk Globe here.

Bibbe Hansen to return to the U.K. for festival gig in May 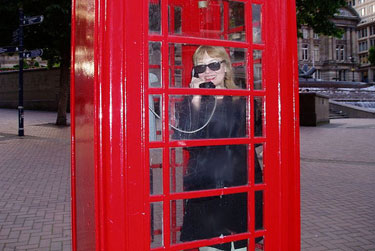 Bibbe Hansen hangin' on the telephone in the U.K.

Warhol star Bibbe Hansen will be returning to the U.K. for a guest appearance at the All Tomorrow's Parties festival ("ATP vs. The Fans Part II: The Fans Strike Back") in Minehead in May. Over thirty bands will perform at the festival including Devo, Spiritualized, Harvey Milk, This Will Destroy You and others. Bibbe's performance, which will include a reading from her recently completed memoirs, is part of the festival's Spoken Word section curated by Lydia Lunch.

Bibbe (who is also the daughter of Fluxus artist Al Hansen and the mother of recording artist Beck) will be appearing at the festival's Crazy Horse venue on May 10, 2009 at 2.00 p.m. The last time that she was in the U.K. was for her appearance at "A Night with Andy Warhol's Superstars" in October 2008 at the South Bank Centre in conjunction with the Hayward Gallery's "Andy Warhol: Other Voices Other Rooms" exhibition. She also performed some of her father's performance art pieces at Flux-Fest in Birmingham during the summer of 2008.

The Warhol films that Bibbe appeared in include Prison and Restaurant (both with Edie Sedgwick) and two of Warhol's film portraits (usually referred to as his Screen Tests), one of which was incorporated into Thirteen Most Beautiful Women.

Details of Bibbe's performance at the Crazy Horse can be found here.

Details about the festival ("ATP vs. The Fans Part II: The Fans Strike Back") can be found here.

British artist Alison Jackson has finished a film she was making on Andy Warhol which will be shown as part of the last season of the South Bank Show series on ITV in the UK.

"Melvyn Bragg‘s specialist Factual And Arts Department are now making their final nine films for the South Bank Show which will prove, as ever, a diverse and eclectic season. The final South Bank Show Awards will be transmitted in January 2010, celebrating the talent and achievements across the spectrum of the arts.

The programmes include... Award-winning artist Alison Jackson has made a film for The South Bank Show looking in to our obsession with celebrity through the works of Andy Warhol. Alison explores how Warhol understood the power of celebrity imagery better than anyone else before or since. But was Warhol celebrating celebrity, or was there an underlying irony to his output? What would he make of today’s celebrity-driven society and the increasingly commercialised art world that has shifted from aesthetics to money? Alison Jackson considers Warhol’s major iconic pieces and shows how he still influences her own work, which can be seen as she creates a new Amy Winehouse work exclusively for the South Bank Show – and brings her to some interesting conclusions."

The British Film Institute has published a study of the 1968 horror film, Night of the Living Dead, as part of their Film Classics series. Written by Ben Hervey, a film historian and screenwriter who has also taught and lectured at the Universities of Oxford and Reading, the study is a fascinating exploration of the film's history and the social milieu in which it was made.

As Hervey points out in his book, Andy Warhol's Interview magazine was an early champion of the Living Dead, helping to catapult it from a run-of-the-mill B horror film to a social phenomenon. The praise the film received in Interview, Hervey notes, "proved crucial in making Night hip." The fourth issue of Interview contained an extensive interview with Dead's director George A. Romero by Terry Ork and George Abagnalo. Abagnalo (who appeared in Women in Revolt and co-wrote Andy Warhol's Bad) also wrote one of the two reviews of the film that appeared in Interview, arguing that Night of the Living Dead "should open at an art house and run for at least a month, because it is a work of art." Warhol star Jackie Curtis chose the film to top her best-of-the-year list in the same issue. The Village Voice also took up the film as a cause and it was eventually screened at The Museum of Modern Art in 1970.

Night of the Living Dead was inspired by the same novel - I Am Legend by Richard Matheson - that also inspired the recent Will Smith movie of the same name. Romero's zombies, however, look more like deranged valium addicts from middle America whereas Smith's zombies resemble gay skinheads after a heavy night of poppers in New York's meat packing district. Romero says about his zombies, "The zombie for me was always the blue collar kind of monster. He was us." Both films - I Am Legend and Night of the Living Dead - feature a black protagonist. In Romero's film, it's not the zombies who kill the movie's Afro-American hero, it's the white Sheriff's posse. Russ Streiner, who plays Johnny in Romero's film (and was also one of the film's producers) is quoted in Hervey's book from a 1975 interview: "I think the black community is looking for a latter day Superman. They find him in Shaft and they find him in Ben."

The film was shot in and near Warhol's birthplace, Pittsburgh, where director George Romero and co-writer John A. Russo had set up an advertising company, Latent Image, and were hoping to break into the feature film market by producing a low budget movie. Ten investors paid $600 each to fund the film although the cost would eventually rise to $114,000. Hervey points out that the movie was released during a time when "tensions that had built over several years erupted in fire and blood... 1968 unreeled like one long horror film, without logic, explanation or happy ending. The shocks kicked off in January with the Tet Offensive... [which] brought unprecedently disturbing images to prime time television... In March, frenzied American troops massacred over three hundred civilians, mostly women and children, at My Lai... Meanwhile schisms back home seemed to teeter near civil war... Five weeks before Night premiered, the Chicago police gassed and billy-clubbed peaceful demonstrators outside the 1968 convention. By November, it seemed like the warmongers had won: Nixon was elected president by what he called America's 'Silent Majority' of patriotic conservatives." The following year, real-life ghouls in the form of Charles Manson and his followers would go on a drug-fueled murderfest in Southern California, bringing the peace and love hippie era of the sixties to a macabre ending.

Night of the Living Dead spawned four sequels directed by Romero (Dawn of the Dead, Day of the Dead, Land of the Dead and Diary of the Dead) and was re-made by Tom Savini in 1990. A 3D version, directed by Jeff Broadstreet, was released in 2007. Analogies have also been drawn between Michael Jackson's Thriller video and Romero's original film.

Girls, rev up your engines for Ru Paul

World of Wonder, Logo and Doron Ofir Casting are now casting for the second series of America's Next Drag Superstar. Applicants are being asked to submit a photo to the gotcast.com website where site users can vote for their favorite entry.