Billy Name is featured in the current issue of Lid magazine - Lid #13 - which has an eleven page spread of Blake Boyd's photobooth shots of Billy in costume and make-up. Lid's editor, Dagon James, will also be publishing a series of books featuring Billy's archive of the silver Factory. Silk screen prints of Billy's photos from the '60s will also be shown at "The Warhol Effect" exhibition at the Metropolitan Museum of Art in the autumn 2012 (which will also include work by Deborah Kass and others).

I have added to the site an interview with Mark Sink. Sink was the subject of a number of photographs by Andy Warhol (often with his pants down) and went on to work for Interview magazine, spending time in L.A., N.Y. and Colorado with Warhol and his associates. Mark was with Warhol during Warhol's Aspen snowmobile accident and was able to photograph it. Mark's take on what happened is considerably different than Warhol's fear, expressed in the diaries, that "Jon [Gould] was trying to kill me." (AWD477)

Sink was particularly close to Warhol's business manager, Fred Hughes, and he recalls his friendship with Hughes during the interview. Mark's studio was used for part of the opening segment of Chuck Workman's film, Superstar: The Life and Times of Andy Warhol, and he still has the Self-Portrait acetate used in the silk screening process during the segment. He also has tapes of telephone conversations between himself and Warhol.

Coincidentally, his connection to Warhol goes back to before he actually met the artist. His great-aunt was Frances Breese Miller who lived in a modernist home called The Sand Box in Bridgehampton. The 1967 guest book for The Sand Box shows the signatures of Warhol, Rolando Peña and other Warhol associates. A press clipping from The Hamptons Voice dated 14 July 1967 is reproduced in the interview which shows that Warhol was filming a movie at the time. 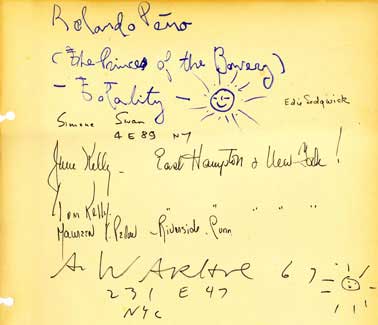 The full interview can be read here.

A complaint was filed 11 January 2011 in the federal court of New York by The Velvet Underground against the Andy Warhol Foundation over the Foundation's licensing of the banana image that Warhol designed for the front cover of the Velvets' first album. The lawsuit seeks a court declaration that the Warhol Foundation has no copyright rights in regard to the banana design and requests an award of the Foundation's profits from the image "with interest." It also seeks damages "trebled together with interest," and the reimbursement of full costs incurred by The Velvet Underground in bringing the lawsuit, including attorney fees.

The Foundation had been licensing the banana image for a considerable amount of time without the Velvet Underground demanding the Foundation's profits from such licensing deals in the past, so why now? According to the court complaint, the Velvets learned that the Foundation intended to license the image to Incase for a series of iPhone and iPad cases in an article in the New York Times and that spurred them into action. They contacted their lawyers.

If the Velvet Underground were to win their lawsuit in its entirety, however, Incase would be free to use the banana design without paying anything to the Foundation or the Velvets. The complaint specifically requests a declaratory judgment that the banana design is in the public domain. Presumably, if such a declaration were made, commercial companies such as Incase would be able to produce as much merchandise as they want featuring the banana design without having to ask permission of the Velvets or the Foundation and without having to pay either of them any sort of fee for the use of the image. If the Velvets have launched the lawsuit in order to protect their right to the image, it could actually have the opposite effect.

In one section of the complaint it asserts that the banana image was selected by Warhol from an element of an ad in the public domain, but in a footnote the complaint also appears to allege that the album design was the work of the art director of MGM records. Footnote #5 states "According to Paul Marechal, Andy Warhol: The Record Covers 1949–1987, Catalogue Raisonné... Andy Warhol designed more than ﬁfty record covers starting in 1949, the earliest being amongst his earliest commissioned works, with most including a stylized Andy Warhol signature. The cover for The Velvet Underground and Nico album was, however, the work of and attributed to Acy R. Lehman, a noted graphics designer who as art director at MGM Records and RCA Records created award-winning album covers for many record albums, starting in 1964."

I have been unable to find a reference to Acy R. Lehman as the designer of the banana cover in the book cited which seems to claim otherwise in the section devoted to the Velvets' album. In that section Marechal asserts that "Warhol designed the cover as an autonomous artwork. The proof lies in the very noticeable signature of its creator. Warhol completely disassociated the image from his proteges' musical content, which had nothing to do with a banana. After all, Warhol was known, not the band." (Section no. 29)

Velvet Underground co-founder John Cale has previously referred to the image on the album cover as Warhol's design. He called it "Warhol's peelable banana" in his autobiography, What's Welsh for Zen, writing "We could not understand why Verve were not planning to release our album any time in the near future. They blamed the delay on problems with printing the sleeve, which featured Warhol's peelable banana." (p. 99)

Warhol discovered the Velvet Underground in December 1965 but had used bananas as (phallic) symbols prior to his involvement with the band in films like Harlot and Mario Banana 1 & 2. All three films featured Warhol's first superstar in drag, Mario Montez, slowly peeling and eating bananas. Shana Alexander mentioned Warhol's bananas in her comments about Harlot in the the January 22, 1965 issue of Life magazine:

"Though it was Warhol who urged me to attend the Harlot premiere that evening, the painter himself was too smart to waste the time. So after watching the star nibble his or her way through three or four bananas I left, feeling confident that the picture's message had reached me loud and clear. The joke was a droll one, but not very."

Warhol continued to use bananas in his films after discovering the Velvets. Ronnie Cutrone, who assisted Warhol at the Factory, recalled bananas being used as weapons in a Warhol film based on the Kennedy assassination (presumably the 1966 film Since.)

"We loaded the camera, and we decided that each character would be played by two people. And I played [Lee Harvey] Oswald with Gerard [Malanga]. Gerard and I were Oswald. For weapons we had bananas. Andy was doing the big, long bananas then. So that fit in."

Warhol also produced banana prints which do not reference the Velvet Underground, a number of which have been sold by Christie's.

Despite the fact that bananas were associated with Warhol prior to the Velvets' album and despite the fact that Warhol actually signed the image that was on the front cover of the album, the Velvets assert in the court papers that "the [banana] symbol has become so identified with The Velvet Underground and its members as a group... that members of the public, particularly those who listen to rock music, immediately recognize the Banana design as the symbol of The Velvet Underground."

Further details about the lawsuit can be found in Business Week, Guardian, Billboard, and the Huffington Post.

"City Theatre confirmed that Broadway veteran and recording artist Billy Porter... will choreograph the new rock musical POP!, featuring Rent star Anthony Rapp as Andy Warhol in its world premiere May 5-27. On Monday, Jan. 23, City will hold open auditions to fill the roles of members of Andy’s Factory.To sign up for a half-hour slot in the open call from 4 to 8 p.m. at 1300 Bingham St, South Side, call 412-431-4400 ext. 463.

Auditioners are asked to prepare 16 bars or one verse of a favorite pop song to be sung a capella or with City’s accompanist. 'We are looking for all types, ages and ethnicities with big voices, and big personalities,' the audition notice says. 'Wear your finest ’70s glam and belt out your best number and who knows … you might just find your very own 15 minutes of fame!'

Those who make the cut will be asked to return on Thursday, Jan. 26, for an audition with the POP! creative team, including director by Brad Rouse."

It's not quite the "world premiere" of the musical as reported in the article. It had previously opened on 13 July 2011 at The Studio Theater in Washington D.C. which I mentioned in the June 2011 news section here. (scroll down)

Happy birthday to Warhol star Joe Dallesandro who was born on December 31, 1948. Warhol films featuring Joe include San Diego Surf, The Loves of Ondine and Lonesome Cowboys. Films starring D'Allesandro that were produced by Andy Warhol and directed by Paul Morrissey include Trash, Flesh and Heat.

"Andy Warhol: Fame and Misfortune" opens at the McNay Art Museum in Texas. The show consists of over 150 objects from the Andy Warhol Museum, including celebrity portraits and some of the iconic images from his Disaster series, spanning three decades of the artist's career beginning in the mid-1950s, organized by the McNay's Chief Curator and Curator of Art after 1945, René Paul Barilleaux. The show will be accompanied by an 80 page catalogue with an introduction by Barilleaux and an essay by Justin Spring who examines the themes of fame and misfortune in the context of Warhol's life. Andy Warhol films to be screened in conjunction with the show include Beauty No. 2 on February 23), Since (aka The Kennedy Assassination) on March 29, and Hedy on April 26.

"Andy Warhol: 15 Minutes Eternal" is a major exhibition of works by Andy Warhol traveling to Singapore, Tokyo, Shanghai and Beijing in 2012 - 2013. The show is described as ""the largest traveling retrospective of Warhol’s work organized to date by The Andy Warhol Museum."

Andy Warhol's San Diego Surf to be screened in 2012

The Warhol museum is due to screen a newly restored version of Andy Warhol's San Diego Surf in 2012 - a version of which was shown at Art Basel on 1 December 2011. Interview's feature on the film can be found here.

Amazon is currently offering at 37% discount on pre-orders of Andy Warhol: Liz with text by Bob Colacello and John Waters. The book is presumably the Gagosian Liz catalogue which is offered for £100.00 on the Gagosian website.

Peter Brant and Bob Colacello in the Financial Times

An interview with Interview publisher Peter Brant has appeared in the Financial Times. Also included is an account by sometimes Interview editor, Bob Colacello:

"In the fall of 1970, I was 23 and studying for an MFA in Film Criticism at Columbia University when Andy Warhol hired me as managing editor and art director of Interview magazine. To say I was expected to learn on the job is an extreme understatement.

My new boss offered a few guidelines: make every photograph as big as possible; don’t put type on the pictures; no poetry; tape recording is preferable to writing in general. He then flew off to the Venice Film Festival. Warhol had founded the magazine the previous year with the poet Gerard Malanga, but they had fallen out – hence the no-poetry edict."

Interview was originally called inter/VIEW: A Film Journal, but when Peter Brant and Joe Allen acquired a 50 per cent interest in 1971, they insisted on putting the famous founder’s name above the title, and it was re-christened Andy Warhol’s Interview."

The full article, including the interview with Peter Brant, can be read here.