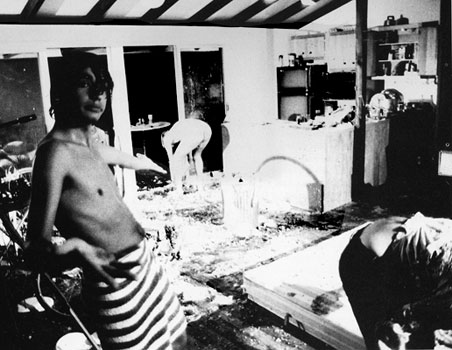 The food fight in Loves of Ondine
(Photo: Billy Name)

"Andy was in one corner of the room with the camera, sitting on a stool and reading a newspaper. The camera was facing one direction and he was facing the other direction, not looking through the camera at all, just reading his newspaper, and every once in a while, he'd hit the on-off switch. And that was him directing this movie." (JOE48)

Footage from Loves of Ondine was originally included in ****, Andy's 25 hour movie. Although much of it was shot in the summer of 1967, it was not released or edited until 1968. It opened at the New Andy Warhol Garrick Theatre in Greenwich Village on August 1, 1968. (FAW31)

It was the first film that both Viva and Joe Dallesandro made for Andy, although Bike Boy with Viva was released ten months before Loves. (Ibid) Likewise in regard to Joe, Lonesome Cowboys was already "in the can" and shooting was about to start on Flesh by the time Loves was released. (JOE48)

There were several versions of the film - the original release was 110 minutes which was cut down to 85 minutes several weeks later. Years later, the 85 minute version was given to Ondine which he showed with other Warhol films at appearances in colleges and art house venues. Ondine had a further 25 minutes cut from the film. The extracted 25 minutes showed up in the 5th New York Lesbian and Gay Experimental Film Festival as an "unknown Warhol film" in 1991. (FAW32)

Paul Morrissey thought of the title. Ondine was an opera fan and there was an Italian movie called Loves of Bellini at the time, so Paul changed Bellini to Ondine (JOE48).

The premise of the film is that Ondine as a gay male attempts to re-adjust his sexuality by various encounters with different women. He tries his luck with Pepper Davis, Viva and Ivy Nicholson, then the film progresses to a sequence in which he plays a background role as a group of Latin American men, calling themselves The Bananas, engage in a food fight. The film then moves on to Ondine and Joe's famous wrestling scene, which was shot in John Wilcock's Greenwich Village apartment. Suddenly, Joe seems to be married to Brigid Polk (Berlin). Although this may be inconsistent with the basic premise of Loves of Ondine, it is similar to Warhol's Imitation of Christ film where Brigid and Ondine are the parents of Patrick. This seems to indicate that Loves of Ondine had been "cobbled together from a variety of reels, at least some of which were originally intended for other films." (Ibid)

Although Joe and Viva got some good reviews, the film was not considered one of Warhol's best. Variety called it a "dull and rambling Andy Warhol comedy about a homosexual half-trying to go straight." (JOE49)