Warhol star Mary Woronov will be giving a reading at the Slake magazine, issue no. 2, launch party at the Track 16 Gallery in Santa Monica on Saturday 22 January 2011. Although the event is free you need to RSVP here.

In addition to her film work Mary is an accomplished author and artist. After leaving the Factory she went on to write five books and her art has been exhibited in numerous galleries in the U.S. and abroad. In 2008 she was the artist-in-residence at the Packer Collegiate Institute. Her art work will be on exhibit at the gallery in which she is giving the reading.

Warhol films that Mary starred in include five Screen Tests, The Chelsea Girls, Hedy (with Mario Montez), Kiss the Boot and **** (Four Stars). She also performed with the Velvet Underground as part of the Exploding Plastic Inevitable. Her non-Warhol work includes cult films such as Eating Raoul, Rock 'n Roll High School (as Miss Togar) and Death Race 2000.

A documentary is currently in production about Mary called Confessions of a Cult Queen - directed by Francesca Di Amico, with cinematography Monica Unger. Details about the film and an excerpt can be seen here.

A Mary Woronov Facebook page can be found here.

La Mama was founded in 1962 as an alternative theatre space following on the footsteps of venues like the Judson Church, the Living Theatre and the Caffe Cino.

Warhol related productions that played at La Mama included Andy Warhol's Pork which premiered there on May 5, 1971. Warhol star Jackie Curtis (Flesh, Women in Revolt) wrote numerous plays that opened at La Mama including Heaven Grand in Amber Orbit, Femme Fatale (with Patti Smith in the cast) and Vain Victory: The Vicissitudes of the Damned (with a changing cast that included Candy Darling, Holly Woodlawn, Ondine and Mario Montez with music by Lou Reed). Curtis also appeared in Cockstrong (with music by the Silver Apples) in 1970 at the venue.

The funeral mass at St. Patricks Cathedral will take place at 10:00 am on the 17th. Condolences can be left online here. 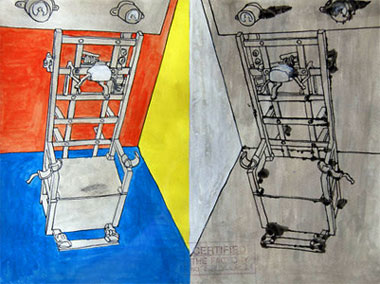 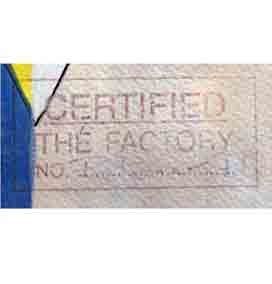 A painting by "Pietro Psaier" of an electric chair is currently being sold on Ebay in Ireland. The item was apparently purchased at Cottees Auctions Ltd. in Dorset at an auction which took place on 14 July 2008. It was described in the Cottees catalogue as "Pietro Psaier: framed and glazed acrylic ink and mixed media on paper; Electric Chair No. 12, bearing The Factory mark and signature."

A previous listing for the same item at an auction that took place at a fine art sale at Lawrences Auctioneers in Somerset on 19 January 2007 includes the claim that it was from the collection of Lord Archer:

Although the listing for the painting says that Psaier worked with Warhol at "The Factory in Soho," the Factory was never located in Soho. It was founded in 1964 at 231 East 47th Street.

The "Factory Additions" certificates of authenticity that accompanied the Psaier paintings gave the impression that they had something to do with Warhol's company Factory Additions, particularly given the claim made in John Nicholson's press releases that Psaier and Warhol collaborated on "joint works" of art...

Painting claimed to be "enscribed" by Andy Warhol, Keith Haring and Pietro Psaier is listed in the Spencer Collection

"You Got the Picture Warhol" alleged to be "enscribed" [sic] by Basquiat, Warhol and Keith Haring here

A painting alleged to be by "Pietro Psaier" and "enscribed" [sic] by Jean Michel Basquiat, Andy Warhol and Keith Haring is listed as part of the Spencer Collection on the website of the Spencer Theater in New Mexico. The actual image of the work, which is being sold for $3,500, is not included in the listing.

Because of the renewed interest in the subject, I have re-posted my original 2008 chronology of "Pietro Psaier." You will find it at here.

Happy Birthday to Joe Dallesandro who was born on December 31st and starred in a number of films produced by Andy Warhol and (mostly) directed by Paul Morrissey including Trash, Heat, Flesh, Flesh for Frankenstein, Blood for Dracula, Loves of Ondine, Lonesome Cowboys and San Diego Surf.

Joe met Warhol and Morrissey in August 1967, about three years after he had escaped from a rehabilitation camp for juvenile delinquents. After leaving the camp he lived in Mexico for awhile before hitchhiking back to the U.S. to Los Angeles where he worked at a pizza parlour and also modeled for a short time for adult mags. After being arrested after a fight he returned to New York, worked in a pizza joint for awhile in Queens, and ended up in Manhattan, living in a dilapidated apartment on 10th Street. His dream was to own his own pizza parlour. Instead he ended up becoming a superstar.

After finishing with Warhol and Morrissey he went on to appear in numerous European films including Black Moon (directed by Louis Malle) and starring with Jane Birkin in Je t'aime moi non plus (directed by Serge Gainsbourg). After a prolific career in Europe he returned to the states and appeared in both television and films including The Limey, The Cotton Club and John Waters' movie Cry-Baby.

More recently, in 2009 Joe became the poster boy for the National Portrait Gallery in London which used an image of him from Lonesome Cowboys to advertise their "Gay Icons" exhibition which ran from July 2nd - October 18th. Earlier in the year he had been awarded a special Teddy Award in the U.S. for his contribution to underground cinema. A documentary about his life, Little Joe, was also released in 2009. He currently lives in the Los Angeles area. 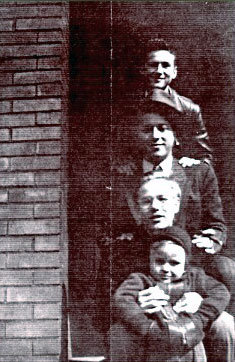 Andy Warhol's brother John, died on Christmas Eve 2010 of pneumonia at the Allegheny General Hospital. John was on the board of the Andy Warhol Foundation for the Visual Arts and one of the three board members who helped to set up the Andy Warhol Museum in Medzilaborce, Slovakia.

"We are losing our own father, our founder. With the sudden departure of John Warhola, our museum is losing its soul."

Flowers and messages can be sent to the Thomas P. Kunsak Funeral Home, North Side, Pittsburgh. Friends will be received at the funeral home from 2 to 4 and 7 to 9 pm on Monday and Tuesday, 27 and 28 December, with a funeral to take place at 10 am on Wednesday at the Holy Ghost Byzantine Church, North Side. 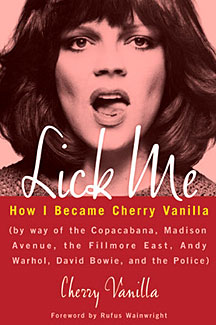 "Although Cherry Vanilla’s career has veered through several cultural fields, she is perhaps best known for having starred in the London production of Andy Warhol’s Pork, her work as David Bowie’s publicist, and her own punk music. It is not surprising, therefore, that her new memoir is partly a catalogue of the various flavors of pop culture that she has sampled. To celebrate the publication of Lick Me: How I Became Cherry Vanilla, she was feted at the Chateau Marmont in West Hollywood by Rufus Wainwright and at a midtown Manhattan gathering attended by Tim Burton, Agyness Deyn, and Patricia Field, among others..."

The full review can be read here. 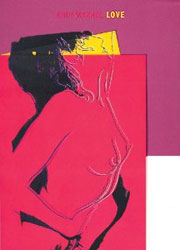 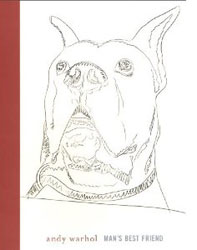 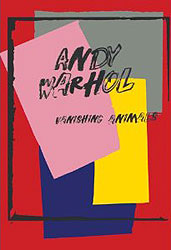 Three new Warhol books are to be published in February 2011 by Lococo Fine Art Publisher as pictured above. Man's Best Friend includes text by Vincent Fremont and Love features an interview with Fremont.

An exhibition focusing on Warhol's use of car imagery opens at the Montclair Museum of Art in New Jersey on March 6, 2011 and runs until June 19th. "Warhol and Cars: American Icons" will feature a wide range of paintings, drawings, photographs, prints and archival documents covering 1946 to 1986, including Warhol's serial work, Twelve Cadillacs (1962), presented for the first time with the possible source images for the work.

Twelve Cadillacs was one of a number of works commissioned for an article titled "Deus Ex Machina" in the November 1962 issue of Harper's Bazaar, which were completed prior to 5 October when Warhol invoiced the magazine for "4 pages of car paintings." Another serial work from the same commission - Seven Cadillacs - will also be shown.

The show will also include some of Warhol's disaster paintings featuring gruesome images of car crashes and mangled bodies which are still shocking today when seen in the original. The exhibition has been designated an American Masterpiece by the NJ State Council on the Arts for the 2010-11 season - an initiative of the National Endowment for the Arts.

The museum also has an excellent permanent collection of Native American Art as well as a selection of American paintings from the 18th and 19th centuries. They will also be showing Robert Mapplethorpe's Flowers from February 4 - July 17, 2011.

Warhol and Dance available from Amazon in February

The publication that accompanied the Warhol and Dance exhibition at the Galerie Thaddaeus Ropac in Paris will be offered for sale by Amazon beginning in February 2011.

The blurb for the show which closed 16 October 2010, gives a hint as to what is included in the book:

"Warhol and Dance explores the cultural milieu that welcomed the artist and provided him with his first “scene” to record with what has become as his individualistic style of portraiture, ink drawings on Manila paper.

Among these works, we have figures from both the worlds of emerging modern dance like Charles Weidman, John Butler, Paul Draper, as well as ballet personalities like Jacques dʼAmboise, Karel Shook and Alexandra Danilova. Clearly, Warhol was interested in all forms of dance including ethnic performance styles as the cast of characters also included Nala Najan, Mesita, Mara and the Cambodian Dancers."

The book is edited by Alessandra Bellavita, Benedicte Burrus and Jill van Coenegrachts.

Photographs of the Cino here.

A short history of the Cino is at: here.

An 87 minute interview with Billy Name can be viewed without charge on the Factory People website here. (Click on the link on the left-hand side of the screen for the full interview.)

In the interview Billy (the president of his senior class in high school) talks about how he gravitated to the avant-garde scene of Greenwich Village and smoked marijuana for the first time as well as talking about the use of amphetamine amongst Warhol's cohorts during the Factory years and his friendship with underground figures like Rotten Rita, Ondine and the Velvet Underground.

Clips from the interview were used in the full length documentary Factory People which can also be purchased from the site.