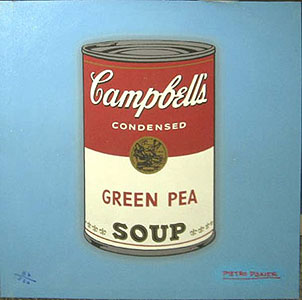 Last month I reported on the role that art forgers John and Nadia Fairchild played in the "Pietro Psaier" saga. They had started a company called Factory Additions and certificates bearing the Factory Additions stamp were being used to authenticate the works of Psaier - an artist who U.K. auctioneer John Nicholson and Psaier "researcher" Jacqueline Chapman have claimed collaborated with Warhol on "joint works" of art. A number of joint works were exhibited during a series of exhibitions in Spain. The most recent Spanish exhibition of these paintings took place earlier this year (Summer 2010) at ArtePaso, Madrid.

The extent of the problem became known after I objected to a Wikipedia biography for Psaier which repeated many of the claims made by John Nicholson in his press release which stated that "Psaier produced layouts, silk-screens and joint works at Warhol’s studio 'The Factory'..." I've spent the past ten years researching and writing about Warhol for this site and the thought that there could have been "joint works" produced by Warhol and an individual who I had never heard of and who had never appeared in any literature about Warhol seemed absurd to me.

Around the time that I first became aware of Nicholson's press release I was in correspondence with Vincent Fremont (the Warhol Foundation's exclusive sales agent for their Warhol paintings) because the Hayward Gallery was planning some events in conjunction with their "Andy Warhol: Other Voices Other Rooms" exhibition. (I ended up moderating a superstar panel discussion for the Hayward and, as a separate event, Vincent did a question and answer session with Jane Holzer.) In our emails we were comparing notes about the Hayward and I asked Vincent if he had ever heard of Psaier. He responded:

"As you know, I met Andy in 1969. I was hired by Andy to work full time at his studio around January 1971. When I was made Vice-President of Andy Warhol Enterprises, Inc in around 1974 I was given a business checking account. I paid most of the bills and wrote all the payroll checks and freelance workers' checks from then on. I never met or remember a Pietro Psaier collaborating with Andy Warhol to create artwork. There is no mention of him in Andy's diary. Yes, you are right I would know who was around Andy in the 1970s and 80s and I do not remember him." (Email 28 July 2008)

I also emailed Billy Name - the only person who actually lived at the Factory on a continuous basis throughout the '60s - and asked him whether he recalled Pietro Psaier. Billy responded: "I'd guess it's like a syndicate for making a market for the fake Psaier works. He certainly wasn't around the Factory anytime in the sixties." (Email 28 July 2008)

The archivist for The Warhol museum, Matt Wrbican, had also commented on Pietro Psaier in a section of Wikipedia titled "Talk: Andy Warhol" at Wikipedia Talk page for Andy Warhol.

All of his comments have since been removed but are referred to in the original debate about Psaier on Wikipedia here.

On the Wiki page, Wrbican said the following about Psaier:

"Another troubling matter is the reference to Pietro Psaier. As custodian of Warhol's archives, I can state unequivocally that I have never seen any reference to this person in them. It's my belief that his alleged friendship/collaboration is a complete sham and hoax, and I would really love to have that belief shattered with indisputable hard evidence."

Joel Wachs, the head of the Andy Warhol Foundation for the Visual Arts, has also denied any knowledge of Psaier working with Warhol. The 17 September 2008 issue of the New York Post noted that "when word of the upcoming [Psaier] sale [by John Nicholson] reached the Andy Warhol Foundation it turned out no one there had ever heard of Psaier, said President Joel Wachs."

Despite the denials by Wachs, Wrbican, Fremont and Billy Name, the auctioneer John Nicholson continued selling works by Psaier and produced a "researcher," Jacqueline Chapman, to back up his claims about the artist. Since last month's report, I have managed to locate Chapman who opened a small gallery called the Esher Gallery in Surrey last year - the same area of the U.K. that Nicholson is based in. Chapman has been one of Psaier's most vocal proponents.

A photograph of Chapman can be found here.

The article in the Surrey newpaper notes that Chapman is selling a "cartoon drawing" by John Lennon for £60,000 in her gallery. According to the article, "Miss Chapman had to send pictures of her gallery to a firm in New York before it was agreed she could host the exhibition" although it doesn't indicate who the "firm" was. As with a previous site owned by Chapman, AndAntiques, her gallery is linked to a charity. With AndAntiques it was the Muscular Dystrophy Campaign. With her current gallery it's a veterans' charity called Combat Stress which has as its patron Prince Charles. Art by Prince Charles is apparently also being sold by the gallery. Chapman states on the website of her gallery that "Other artworks in our [Christmas] exhibition will include those by HRH Prince Charles...."

Strangely, for someone who vehemently defends Psaier, Jacqueline Chapman doesn't sell his paintings from her gallery...continued here.

Signed collaboration by Andy Warhol and "Pietro Psaier" currently being sold in the Netherlands for 7,500 euros 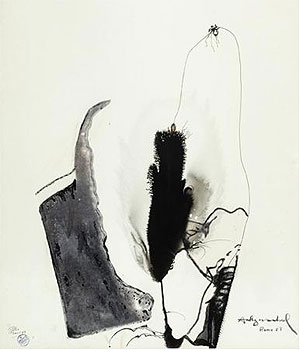 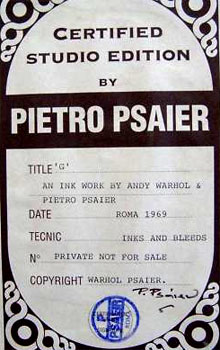 A painting advertised as a collaboration by Andy Warhol and Pietro Psaier, complete with signatures, is being sold via Ebay in the Netherlands for 7,500 euros by a business seller - Artxcel B.V. - who is also selling works by Arman, Salvador Dali and Karel Appel through its website here.

The Ebay page for the Psaier/Warhol collaboration is here.

Create your own Andy Warhol style Screen Test for MoMA

The Museum of Modern Art in New York is encouraging viewers of their website to create their own Andy Warhol style Screen Tests in conjunction with their "Andy Warhol: Motion Pictures" exhibition. A selection of the tests will appear on their site.

Details here. (To scroll through the MoMA Screen Tests, put your cursor over the Screen Test on the MoMA site and click on "next" in the lower right hand corner.)

An exhibition focusing on Warhol's use of car imagery opens at the Montclair Museum of Art in New Jersey on March 6, 2011 and runs until June 19th. "Warhol and Cars: American Icons" will feature a wide range of paintings, drawings, photographs, prints and archival documents covering 1946 to 1986, including Warhol's serial work, Twelve Cadillacs (1962), presented for the first time with the possible source images for the work.

Twelve Cadillacs was one of a number of works commissioned for an article titled "Deus Ex Machina" in the November 1962 issue of Harper's Bazaar, which were completed prior to 5 October when Warhol invoiced the magazine for "4 pages of car paintings." Another serial work from the same commission - Seven Cadillacs - will also be shown.

The show will also include some of Warhol's disaster paintings featuring gruesome images of car crashes and mangled bodies which are still shocking today when seen in the original. The exhibition has been designated an American Masterpiece by the NJ State Council on the Arts for the 2010-11 season - an initiative of the National Endowment for the Arts.

The museum also has an excellent permanent collection of Native American Art as well as a selection of American paintings from the 18th and 19th centuries. They will also be showing Robert Mapplethorpe's Flowers from February 4 - July 17, 2011.

More on the Cino here.

Photographs of the Cino here.

A short history of the Cino is here.

The Savage Nomads are Warhol fans

London band, The Savage Nomads - winners of November's "Best of MySpace" for track of the month What The Angel Said - are fans of Andy Warhol and Lou Reed. Vocalist and guitarist, Cole Salewicz, says "I can't express how much I look up to Warhol and Reed... I idolise the manner in which Warhol manipulated the social consciousness and I've been lucky enough to meet Lou Reed and see him perform a few times. I'm even a fan of Metal Machine Music and saw him perform the record at the Royal Festival Hall a few months ago - very intense..." 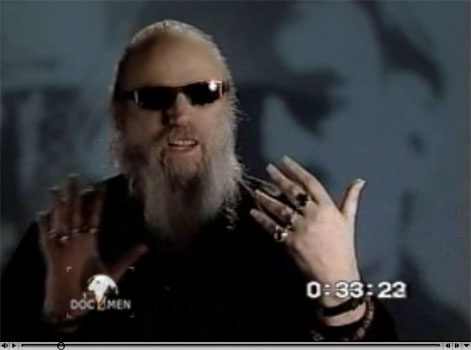 An 87 minute interview with Billy Name can be viewed without charge on the Factory People website here.
(Click on the link on the left-hand side of the screen for the full interview.)

In the interview Billy (the president of his senior class in high school) talks about how he gravitated to the avant-garde scene of Greenwich Village and smoked marijuana for the first time as well as talking about the use of amphetamine amongst Warhol's cohorts during the Factory years and his friendship with underground figures like Rotten Rita, Ondine and the Velvet Underground.

Clips from the interview were used in the full length documentary Factory People which can also be purchased from the site.

Thomas Sokolowski is leaving The Warhol museum: no explanation given

The Carnegie Museums of Pittsburgh have announced the departure of the director of The Warhol museum, Thomas Sokolowski - despite the fact that he denied he was leaving in an interview on the Friday prior to the announcement, according to the Pittsburgh Post-Gazette. No explanation for his departure has been given by Carnegie Museums or by Mr. Sokolowski. It is unknown what Mr. Sokolowski's future plans are - or whether he intends to write a book about his experiences at The Warhol museum and/or his dealings with the Warhol Foundation - a separate entity who provides funding to the museum.

Sokolowski will be sorely missed by both the museum's staff and the local community of Pittsburgh. Under his leadership the museum has hosted some truly innovative and cutting-edge exhibitions of international interest as well as supporting local artists and musicians. 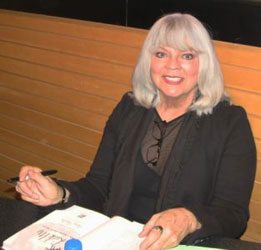 Cherry Vanilla, who starred in the London production of Andy Warhol's Pork, has been busy promoting her new book, Lick Me: How I Became Cherry Vanilla

, which made L.A. Mag's top ten books in November. On 4 December 2010 she'll be doing a book signing at Robert Wilson's Watermill Center and on 7 December at the Penn Plaza branch of Borders Bookstore in Manhattan.

Andy Warhol's NYC to be published in 2011 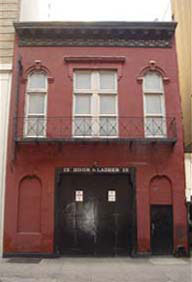 The firehouse that Warhol used as a studio is just one of the sights in Andy Warhol's New York City: Five Walks, Uptown to Downtown

by Thomas Kiedrowski (with illustrations by Vito Giallo) is due to be published next year. Kiedrowski is the person behind the The Andy Warhol Sites Tour. Illustrator Vito Giallo was head of the Loft Gallery in New York which exhibited Warhol's pre-Pop work in 1954. In addition to Giallo's illustrations the book contains photographs by Gretchen Berg and others. Amazon is currently offering a discount of almost a third off the retail price on all pre-orders. The Amazon page is here

Mandy Merck, Professor of Media Arts at Royal Holloway, University of London and series editor of Out on Tuesday will be speaking about the relationship between Susan Sontag and Andy Warhol on 5 December 2010 at Sheffield University. Warhol did a Screen Test of Sontag in 1964. The event is part of the Gay Icons Project.