The RWA President asks "Is the Andy Warhol authentic or a hoax?" 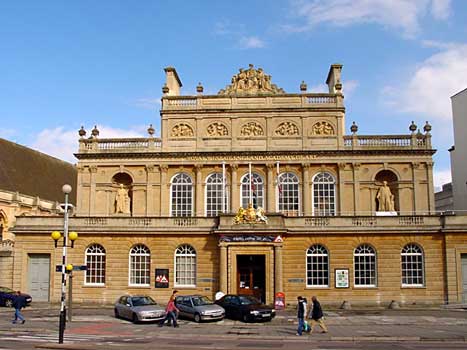 [Update 20 June 2012: The RWA has posted a new description of the exhibition which has removed some of the earlier claims made about the painting and inserted the word "believed" in regard to the claim that the painting is by Warhol. The original press release can be downloaded here.]

The RWA Bristol have changed their announcement for the Rudy Vallee sketch they are exhibiting in July that they previously alleged was the work of Andy Warhol. They originally claimed that their July exhibition was the "First public exhibition of recently discovered Warhol." Their announcement for the show now reads "Earliest known work believed to be by Andy Warhol to go on show." On 9 June the President of the RWA posted a blog asking "Is the Andy Warhol authentic or a hoax?"

Their original description of the work claimed that the background of the work was coloured with "green and orange felt-tip pen" and that the work had been "valued at $2 million." It also claimed that "English owner Andy Fields bought the piece unknowingly for just $5 (£3) at a garage sale in Las Vegas that included property from Edith Smith, Warhol's former carer" and that "Mr Fields discovered the sketch inside a framed drawing of William Boyd as Hopalong Cassidy by Gertrude Stein."

In regard to the authenticity of the Rudy Vallee sketch, the President of the RWA writes in her 9 June blog "I think that it's up to you, the public, to decide. Come and see the work in question. The Andy Warhol Authentication Society no longer exists. So who is to say?" The blog is here.

A recent news report on the Rudy Vallée sketch broadcast by ITV Bristol noted that "Mr Fields' work was presented to the Andy Warhol Authentication Panel last year. The panel did not approve the picture - saying it needed more information about the sketch's background. But it did not completely reject the picture either." That is not what Andy Fields stated in his 2011 email. As noted above, in his email he said that the work had been submitted to the Board that that they said it was not by Warhol. Fields also said in his email that someone from The Warhol museum told him he "must make a connection from the gentleman" he "bought the picture from in Las Vegas back to the Warhol family in Pittsburgh in the early days." The Warhol museum is a separate entity to the Foundation. The museum is a Carnegie museum. The suggestion by the museum that Fields should get more information about the painting is hardly a ringing endorsement. If The Warhol thought the painting was by Warhol they would have asked to exhibit it. They didn't.

In his email Fields says that he can't track down the person he acquired the painting from (Milton Longe) because he "is apparently running from the law through drug charges." How would Fields know this? What were the alleged "drug charges?" Has anyone checked to see whether there are drug charges against someone named Milton Longe in Las Vegas?

In another email I have seen from Fields, he provided a family tree for Milton Longe and Longe's alleged aunt, Edith Smith who Fields claims looked after Warhol as a child. But where would Fields have got the family tree from if he was unable to find Milton Longe? The Warhola family has denied knowing anyone named Edith Smith. Andy Warhol's brother, Paul Warhola, has stated "Mr. Fields supplied us with several names that he felt may connect this drawing with the family. None of the names were familiar to the family. Therefore there is NO connection to Andy Warhol or Warhol’s family whatsoever." (See Paul Warhola statement.)

Fields says about Edith Smith that she was "mostly referred to as Edi when in the Warhol household" and "Later, she was also on the scene in New York and I believe she may have been given the picture as an unsigned piece initially when he was young, and got him to sign it when he was becoming famous." The only "Edi" that hung out with Warhol in New York was Edie Sedgwick who, of course, did not know Warhol as a child and was not the aunt of anyone named "Milton Longe." Warhol was not known for signing his childhood drawings with his adult signature and the signature on the Rudy Vallée sketch does not match Warhol's signature.

In another email that I have seen, Fields says that he has been in touch with Leonard Kessler who attended Carnegie Tech. when Warhol studied there. Fields gives the impression that Kessler backs him up in his email. A member of the Warhola family contacted Kessler and wrote to Fields last year informing him that Kessler agreed with the family that the Rudy Vallée sketch "does NOT look like early Warhol and that Andy would never work like that."

An exhibition asking the question of "is it or isn't it" in regard to the attribution of a painting, assumes there are experts on either side who believe the painting is or is not by a particular artist. In this case, the RWA has not named any experts who think the painting is by Andy Warhol. According to ITV Bristol, "one expert" backs Fields up "but 7 more won't commit." You cannot attribute a work of art based on experts who are unwilling to say whether it is or is not by a particular artist. You need experts who are willing to say that it is by a specific artist. The alleged "expert" who "backs Fields up" has not been been named. Why?

Until somebody names the alleged expert who supposedly says that the work is by Warhol, the situation that exists now is that no experts have publicly stated that the work is by Warhol. So why is the RWA holding the exhibition at all - particularly given that showing the work will help create a provenance for it which could make it easier to sell? The RWA should not be suggesting that the work 'might' be authentic if they are unable to name a single expert who believes that it is. If the painting is exhibited at the RWA, the owner of the work will be able to list the showing of it at a Royal academy as part of the painting's provenance. The owner would not be under any obligation to mention the RWA president's blog asking if the painting is "authentic or a hoax." Potential buyers looking at the provenance of the painting could think that it must be authentic as it was exhibited at a Royal Academy. Is it irresponsible of the RWA to contribute to the provenance of such a work by exhibiting it at their institution?

The RWA President's blog is followed by an essay on "art forgery." If the RWA is now implying that the Rudy Vallée picture is an "art forgery," what do they allege about its owner and his account of how he came to acquire the work?

The exhibition of the work and the way that this matter has been dealt with by the RWA has caused considerable distress to the Warhola family. Andy's brother, Paul, will turn 90 this year. The family made a number of attempts to contact the director of the RWA, Trystan Hawkins, but he did not bother to respond to them. I know of no other reputable educational institution which would treat an artist's family this way. Paul Warhola has denied that the RWA picture is by his brother. A statement by him can be found here. The sketch was supposedly found behind a sketch by Gertrude Stein but a Stein expert, Professor Wanda Corn, has denied that the sketch was by Stein - her statement is here. Warhol expert Patrick Smith has also expressed his opinion that the Rudy Vallée sketch is not by Warhol - his statement is here.

A list of the trustees of the RWA can be found here. The MP for Bristol West is: Stephen Williams. The RWA is a Royal academy - a registered charity which has as its patron HM Queen Elizabeth II whose portrait by Andy Warhol hangs in the National Portrait Gallery.