Left: The alleged drawing of Rudy Vallee by Andy Warhol/Right: Close-up of signature

Lately there has been a plethora of newspapers and websites reporting on an alleged drawing of Rudy Vallée claimed to have been sketched by Warhol when he was 10 or 11 years old. One site - thestar.com - goes into considerable detail about how the drawing was discovered. According to that account, Andy Fields purchased the work at a Las Vegas garage sale held by someone called Milton Longe that included memorabilia belonging to Longe's aunt, Edith Smith, who allegedly baby sat Warhol in Pittsburgh when Warhol was a child. The Warhol drawing was apparently "tucked behind" a drawing by Gertrude Stein that Fields purchased at the garage sale. According to The Sun newspaper in the U.K., Fields purchased the work in 2010, and "experts have hailed it the earliest known example of the late American's Pop Art - for which he became famous decades later."

As it turns out, however, Mr. Fields has so far not produced any Warhol experts that have confirmed the work is by Warhol or who have "hailed" it as anything particularly important. In a recently posted video statement, Mr. Fields admits that although he took the sketch to the Antiques Road Show for appraisal, they told him off-camera that he would have to take it to the authentication board. But how can he do that now, he asks in the video, since the board has disbanded?

As the board is now no longer accepting paintings for authentication, has Fields approached Christie's or any of the other major legitimate auction houses to have it appraised? Fields says in the video statement that "yes, it's been appraised and its been looked at by several people" but nobody is prepared to publicly say that it is a Warhol. But if nobody is willing to say publicly it is a Warhol, how can Fields claim that it is an authentic Warhol? 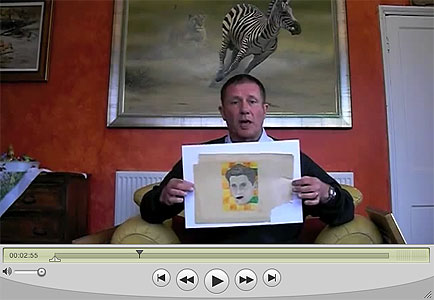 In the Daily Mail, Fields is quoted as saying, "I bought some sketches by Gertrude Stein at the garage sale and the Warhol work was actually behind one of these. When we were framing one of these I saw the Warhol work looking back at me there undiscovered." In his video statement, Fields says the following about the seller of the sketches, "He told us on the day in question that his aunt used to look after Andy Warhol...." But why were they discussing Warhol if the picture had not yet been discovered?

The alleged Stein drawings were apparently signed. Here is a photo of one of them: 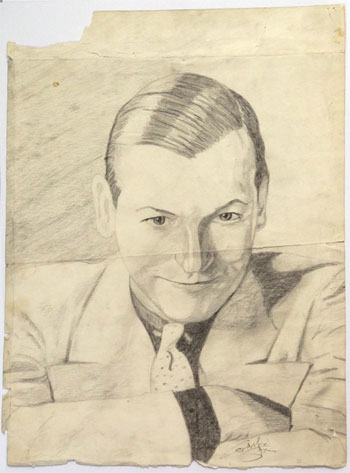 The subject of the drawing is supposed to be Hopalong Cassidy - a fictional character created by Clarence E. Mulford - and played by William Boyd in movies. I've been unable to find an illustration of the fictional character or a photograph of William Boyd that corresponds to the alleged Stein drawing. Why on earth would the writer, Gertrude Stein, choose Hopalong Cassidy as a subject in the first place?

Are we honestly to believe that Gertrude Stein (a writer rather than an artist), drew the picture of Hopalong Cassidy with such precision? Given her interest in cubism, if she did turn her hand to drawing, the pictures would probably be a lot more interesting than the one above which is more in the style of the alleged Warhol drawing.

The seller of the drawings would have seen the signature that appears in the lower right hand side of the drawing. Why would anyone sell what they believed were authentic signed drawings of Gertrude Stein for $5.00 at a garage sale?

Here is a close-up of the signature on the alleged Stein drawing: 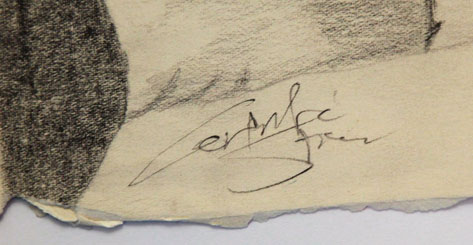 The signature does not match samples of Gertrude Stein's signature that appear on the internet: 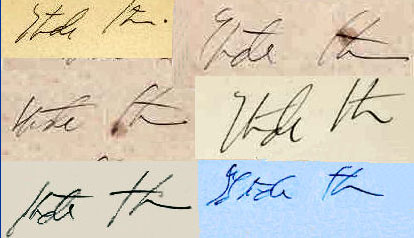 In regard to his alleged Warhol sketch, Fields says in an interview with Channel 4 News (UK), "On the day that me and my friend were in the garage sale, the gentleman was saying 'Cor, if only I had the original that my auntie used to have - she used to look after Andy when he was a kid...'" The "original" of what? The Warhol drawing? I thought it was discovered later during the framing of the Stein drawings. (Note to Fields: Americans don't use the expression "cor.")

The Channel 4 interview can be found here.

Fields has also not explained why he thinks his 'Warhol sketch' is of Rudy Vallée. Who, specifically, told him that the picture was of Vallée and when did that person tell him?

According to Fields in his "Andy Warhol Fact Video," after he discovered the alleged drawing of Vallée by Warhol he searched for the seller without success and that he even did "casino stake-outs" to look for the seller (which, according to The Star's article, was claimed to be someone named "Milton Longe" as noted above.) I googled "Milton Longe" and got a Badoo profile page for a person with that name which has the following photograph and a description of Longe in the "about me" section which mentions Andy Warhol: 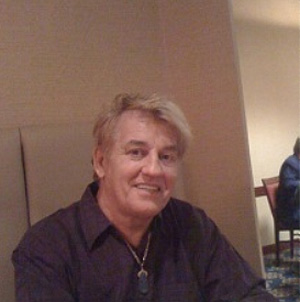 Profile pic from the Badoo page for "Milton Longe"

Milton Longe: "When I was younger I partied with Andy Warhol, Truman Capote, Leonard Sillman, and Noel Coward at Studio 54 and other places. My Alma Mater is Columbia University. I have travelled through Western Europe, Northern Africa, India, and Egypt. I taught at American University in Cairo, when I lived in Egypt. I purchased my first property when I was 19 years old and became a multi-millionaire in real estate before I was 21. I am partners in a major modeling studio. I am a strong believer of living in the moment." (Badoo profile here.)

Milton Longe could not have partied with Noel Coward at Studio 54. Coward died in 1973. Studio 54 opened in 1977. Presumably, Mr. Fields has seen Longe's profile although he doesn't mention it in his video statement - assuming that as part of his extensive search for Longe he googled Longe's name. In regard to the claims made on the Badoo page, I have so far been unable to find a mention on the internet of a "major modeling studio" with Longe as a partner. Even if it were true that Longe partied amongst people like Warhol and Capote at Studio 54, so did a lot of people. It doesn't mean that Fields' painting is authentic - that is assuming that the Badoo profile is legitimate. Anyone can create a Badoo profile using any picture they want. Badoo will have the i.p. number of the computer of the person who posted that profile and from the i.p. number it should be able to identify who actually posted that profile and from what country the profile was posted.

Mr. Fields claims that the sketch was done by Warhol when he was about 10 or 11 years old or c. 1938/39 - although in one section of his video statement he also mentions a date of 1940. The painting is signed "Andy Warhol." But Warhol's real name was Andrew Warhola. Would he have signed his childhood sketches at all at the age of 10 or 11 and, if so, would he have signed them with the name he later became famous by rather than his birth name? Fields has provided an explanation. According to the Daily Mail, "Mr Fields said he believes it is signed 'Warhol' rather than 'Warhola' because the artist only signed the work many years after he drew it." But how would he know that? I can't think of any instance where Warhol, as an adult, went back to his childhood drawings and signed them. If he did sign Fields' drawing as an adult, he did it with a signature he didn't normally use for his art work. The signature on Fields' drawing does not match either of the two samples given in the catalogue raisonné of Warhol's signature.

There is in existence an early authentic drawing by Warhol of a childhood friend, Nick Kish. It was drawn by Warhol in 1942 when the artist was a teenager. Warhol signed it "A. Warhol." This is the signature on that drawing:

Referring to the signature on Fields' drawing, the Daily Mail notes that "Audrey Giles, a forensic handwriting and document examiner, was asked to assess whether the signature on the work was Warhol’s and concluded there were key elements of it which confirmed it was." (See Daily Mail article here.)

In his video statement Fields also claims that he is not after financial gain and wants the work to go to a museum. Donating a Warhol to a museum is not very difficult. Has Mr. Fields rung the Museum of Modern Art in New York or the Andy Warhol Museum in Pittsburgh and offered the work to them? If not, why not? If so, what did they say?