Callie Angell Obituary
by Gary Comenas (2011)
(to updates and tributes) 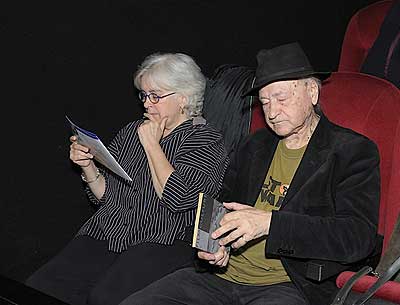 Callie Angell, the author of the Andy Warhol film catalogue raisonné, has died. Her body was found on Wednesday, May 5, 2010 in her apartment after she failed to show up for work. She was 62 years old - born on January 6th. She was due to give a talk on Warhol's unfinished film Batman Dracula at the Light Industry in Brooklyn on May 18th. The cause of death has been reported as "suicide."

Callie came from a literary background. She was the daughter of the well-known writer and senior editor of The New Yorker magazine, Roger Angell. Roger was the son of the writer Katherine Sargeant Angell White and Ernest Angell. After a divorce Katherine went on to marry E.B. White, the author of Charlotte's Web and Stuart Little. Copies of Katherine Sargeant White's correspondence with Callie can be found in Bryn Mawr College Library's Special Collections.

As the author of the first volume of the Andy Warhol catalogue raisonné, Callie focused on Warhol's Screen Tests of the '60s. She was well-placed to write about America's cultural revolution at the time, having participated in it herself. In an essay published in The New Yorker in June 2006, her father recalled a demonstration against the Vietnam War that they attended together during the 1960s.

"Caring about Vietnam made you feel good, and it brought you closer to your kids, as well. My older daughter, Callie, was a student at Goucher College, outside Baltimore, just then, and she came along on another weekend, when we joined a crowd of picketers walking slowly around the White House and chanting, 'Hey, hey, L.B.J., how many kids have you killed today?' We’d voted for Johnson, of course, and had been big fans of his, going back to his time as Senate Majority Leader, but all that was gone now. At some point that day, our slovenly bunch came close to a trail of sightseers, docilely lined up to visit the White House, and Callie suddenly found herself face to face with a long bygone schoolmate.

As was happening in many multigenerational families just then, I believe, Callie became our delegate at the spilling-over and increasingly bitter demonstrations. She was there in October of 1967, when the Yippies attempted to levitate the Pentagon, and she told us that night that she’d seen men in the first row of marchers placing flowers inside the barrels of the fixed-bayonet rifles presented by the front row of scared M.P.s. Another time, she joined a line of candle-bearing demonstrators walking slowly around the outskirts of Washington, each with the name of a dead G.I.—dead in Vietnam—hung around his or her neck."

Callie's Screen Tests book is a veritable history of the decade of the 60s and an indispensable research source for that era with its extensive index, footnotes and appendices. If you want to know Andy Warhol (or the many people who visited his Factory) read Callie's book.

David Antrim (from his review in the Village Voice):

"From early '64 through late '66, hundreds of individuals, hipsters, hustlers, and underground legends passed through Andy Warhol's midtown Factory and had their portraits made on film. Each three-minute 'screen test' was an individual drama. Researching the circumstances by which it came into existence, Callie Angell weaves a skein of ethereal correspondences into a social history of the mid '60s New York art world. The images are stunning, the author's wry descriptions marvels of precision. Elegant, intelligent, and absurdly erudite, this catalogue raisonné can be leafed through as an art book and read like a novel, that is, a novel with an index and footnotes."

In addition to writing the first volume of the Andy Warhol film catalogue raisonné, Callie wrote extensively on Warhol's films for other publications including Andy Warhol: Motion Pictures (Berlin: KW Institute for Contemporary Art, 2004) and the excellent 1994 inaugural publication of The Andy Warhol Museum. In 1994 she also wrote what remains the most complete and well-researched monograph on films by Andy Warhol in general - The Films of Andy Warhol, Part II. She generally avoided being interviewed for Warhol documentaries but did appear in Esther B Robinson's excellent film about Danny Williams and Warhol - A Walk into the Sea.

Callie will be sorely missed. Her work was unparalleled in the field of Warhol scholarship. When you came across something written by Callie on Warhol's films you could be sure that she had her facts right. Her conclusions were sometimes in conflict with what people wanted to believe about Warhol and his Factory but they were always backed up with irrefutable documentary evidence. As a person she was refreshingly down to earth in a field that can sometimes seem to be riddled with style (or attempts at style) over substance. Rest in peace, Callie. You have left a large gap in the lives of your friends and in the field of Warhol scholarship. You will always be remembered.

Interview on Art on Air

An essay by Callie on Outer and Inner Space can be found at here.