The three part documentary on Andy Warhol that was broadcast in January 2022 on BBC2, titled Andy Warhol's America, did not fare well, ratings-wise.

Although the initial concept of the documentary may have been interesting - the comparison of some of Warhol's paintings to the events portrayed on canvas - it strayed away from that concept so often that it was difficult to understand what its ultimate aim was. Did it have something to do with Andy Warhol's book, America? Was it a straightforward biography or was it an examination of American history through Warhol's paintings?

Most of the biographical details in the first episode had already been explored elsewhere in more detail - in printed biographies, other documentaries or on this site (see the main timeline, the Pre-Pop section or the oral history, From Nowhere to Up There.)

The interviewees chosen for the documentary were the usual assortment of Warhol biographers and colleagues but there were some strange omissions and additions. It was lovely seeing Abigail Rosen's smiling face in episode two (I had interviewed her in 2007) and thank god people like Gerard Malanga, David Dalton and Joey Freeman were included.

Sadly, there was no mention of the Factory 'foreman,' Billy Name, apart from a Screen Test image that floated by at one point.

It may be that the director, Francis Whately, wanted to concentrate on the Factoryites who are still living but why not interview Viva then, or Mary Woronov or Joe Dallesandro?

There was a short interview with Bob Colacello, but what about Vincent Fremont?

Strangely, the cabaret entertainer, Penny Arcade, is interviewed throughout the documentary even though she wasn't part of Warhol's original Factory, never appeared in a film directed by Andy Warhol, and is not mentioned in Warhol biographies or the Diaries. She is captioned "Warhol Superstar," but given that she only appeared in Women in Revolt (directed by Paul Morrissey) for five minutes or so, I couldn't help but wonder who at the BBC came up with that caption and why? How could someone be a "Warhol superstar" without having appeared in a film directed by Andy Warhol? I almost lost interest at that point - if the director of the documentary could make that much of a mistake, I wondered how much he actually knew about Andy Warhol before making the documentary.

Penny Arcade hypes herself on social media, but doesn't have much of a presence in the world of Warhol elsewhere. When, in 2015, I added her to the photographs of Warhol superstars to this site at her request, another actor in Women in Revolt, George Abagnalo (who gives an excellent performance in the film), sent me this: 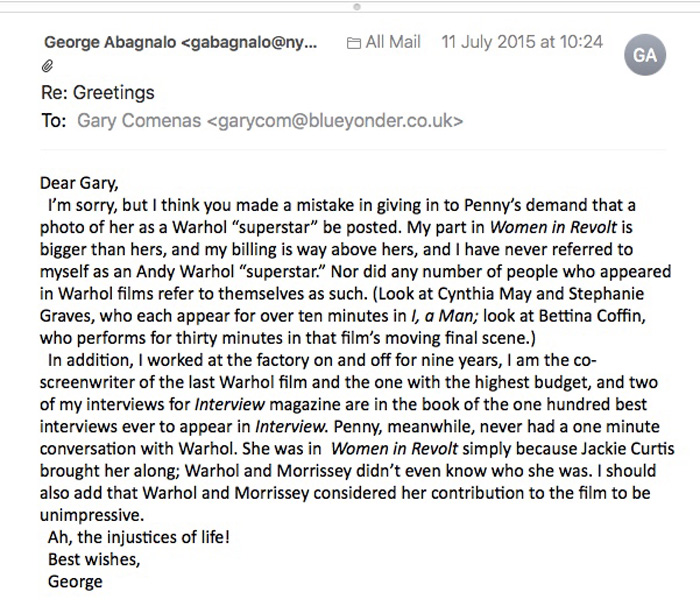 I took her off the site and was surprised to see her included in the documentary. Sometimes it felt like the researchers on the film had got much of their information and interviewees from Facebook - not the most accurate source apropos Warhol.

By captioning Penny Arcade as a "Warhol superstar" the BBC is helping her to "sell" her cabaret act. The audience thinks they are seeing a "Warhol superstar." Even worse, Penny has a reputation for being involved with gofundme campaigns of a dubious nature. At the moment she is running a campaign for a photographer friend, Laura Rubin, who was also a supporter of Donald Trump and has expressed racist views in emails she sent me. For instance, in July 2016, Laura Rubin wrote, "i sent one of his ['Milo's'] breitbart articals last month, w/yes a photo of a roof w/falling gays. even if you didnt see it, dont play dumb. its a subject which is off limits for you. if you are ok w/londonstan thats fine. many of us dont want it in that in the US. milo commutes between both places. since there will be a 500% increase in mideastern young muslim men (hillary's plan), theres reason for some of my friends to worry.” [Her grammar, not mine] [Milo refers to a Trump supporter who was banned on Twitter]

Penny Arcade, the so-called "Warhol superstar," has raised over $70,000.00 for this person in a gofundme campaign called "Help Laura Survive," where, in addition to donating toward her medical bills, you can also buy prints of her work. I corresponded with Laura Rubin for over twenty years. My impression was that she wasn't in particular hardship - I'd like to see the medical bills that the fund allegedly paid for. When you click on "Donate" you receive the message, "Your donation will be in support of Penny Arcade." Somebody needs to look into this further. Is it a scam?

In regard to the other interviewees - the ones who had experienced the actual events in one way or another - they provided interesting commentary, but they also opined on Warhol's reasons for creating the works. How could they know that? A couple of interviewees gave the impression that Warhol's Race Riots and Death and Destruction paintings were done as a money-making venture when, in fact, they did not sell at the time. Despite the lack of sales, Warhol continued with the series, just as any other artist would who was trying to express a concept, a truth or an aesthetic idea. Warhol may have been called a "Sphinx without a secret" by Truman Capote, but maybe his "secret" was that he was actually an artist - a 'real artist' - and not just a media personality.

The best episode was the third one, which went into detail about subject matter of one of the subjects of his Ladies and Gentlemen series, Wilhelmina Ross, and her sad ending, and also gave us an interview with the nephew of someone who was on the plane that crashed at Orly which was the subject of Warhol's 129 Die in Jet!

In general, however, the documentary was a bit like "Andy Warhol lite" - more style than substance - at least in regard to the first two episodes.