The final page of the Penthouse magazine article about Andy Warhol's Pork showed an actor preparing for the "plate job" and noted that Geri Miller was a star of Andy Warhol's Trash "which was seized by police when shown in England." Penthouse might be referring to Flesh rather than Trash as the first public screening of Trash in London was November 15, 1971 and it wasn't seized although did become embroiled in a censorship battle. (See Trash.) 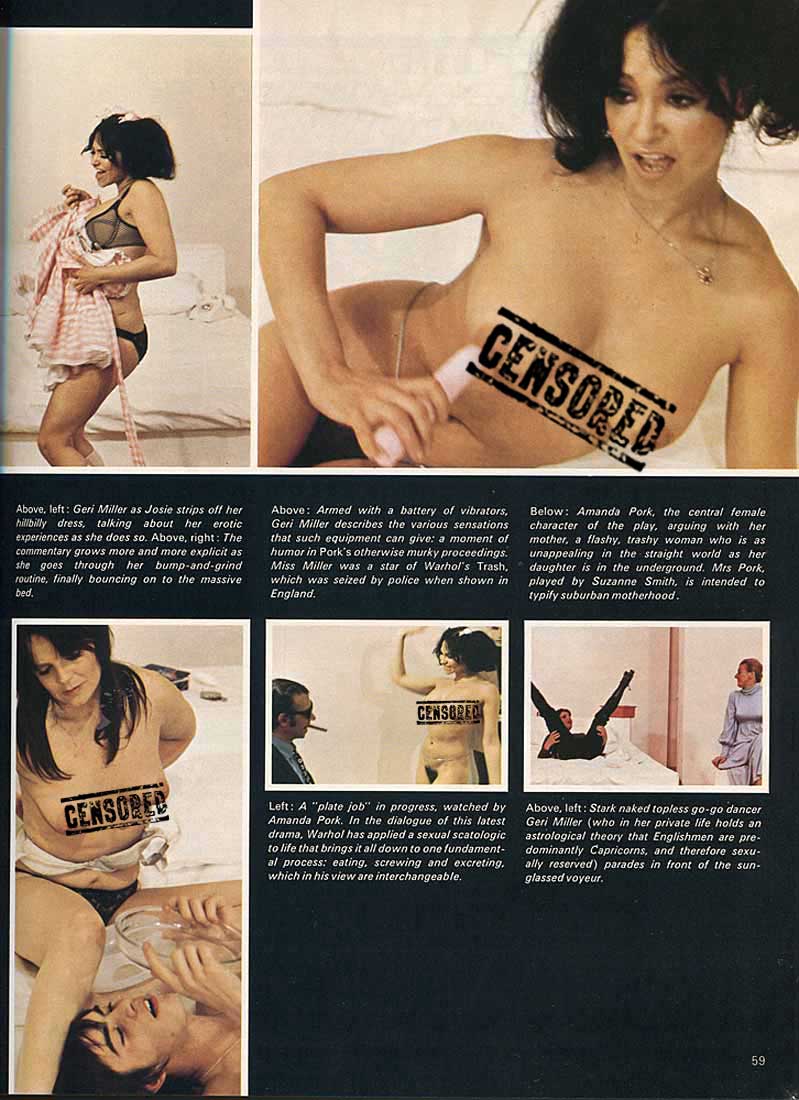 Given the amount of publicity that Pork generated, both in the U.S. and the U.K., it's unclear why the play was never given a longer run in either country. In the U.S it was covered on the front page of the Arts and Leisure section of the New York Times in what was generally, a surprisingly good review. It certainly garnered more press space and favorable comments than most of Warhol's films in that newspaper. And both Warhol and Morrissey enjoyed the play. Jayne recalls that they were often in the audience when it played New York and would "laugh till the tears were rolling out of their eyes."

Andy and Paul Morrissey came to see the play again and again at La Mama. They would sit there and laugh till the tears were rolling out of their eyes. They particularly loved my part because I was playing Viva with a big wig sticking straight up in the air and purple lips. The lines weren't that funny to me, but they thought they were hilarious because they knew the context of them. They'd sit there cakling like witches, loving every minute of it. And of course they loved the fact that everyone at the factory was getting upset at being made to look totally ridiculous. (JCR76)

According to Jayne, both Warhol and Morrissey also attended the closing party in London:

The closing night party for Pork was really great. They hired a club, and Warhol was in town with Paul Morrissey - it was around the time the David Bailey film on Warhol came out, so I guess he was over in London to promote that. Bailey loved Pork, and he'd photographed us; I'd done a bit for his Warhol documentary which we'd shot back in New York. At the Pork closing party, Andy spent most of the evening in the men's room, waiting for a cute boy to come up to the urinal. Then he'd rush over with his tape recorder, stick the microphone under the boy's nose and start to interview him. "What do you think about the party tonight? What's your favorite drink?" Everyone was going. "Where's Andy?". I told them where he was and we'd go and look in on him hanging out in the men's room, waiting for the boys, giggling like a young girl. Some of the boys were freaked out by it, some of them were cool or amused. Andy just wanted a good look at their cocks. (JCR82)

The party couldn't have been around the time that the Bailey documentary came out, as claimed by Jane. Pork closed on August 28, 1971. The Bailey documentary was given a press screening in January 1973 but wasn't broadcast publicly until March 27, 1973 due to censorship problems. That was well after the performances of Pork. (See page two of Trash.) If Warhol and Morrissey were in London in August 1971, it may have had to do with the ongoing censorship battle over Trash. The August 27, 1971 issue of the Financial Times reported "The case currently in point is the Andy Warhol - Paul Morrissey film Trash, which has been flatly rejected by the British Board of Film Censors. The directors happen to feel very violently about drugs, and the film is the most effective possible propaganda against narcotics..." (Although Morrissey often claimed that Trash was an anti-drugs film, one wonders whether his strong stance had more to with the censorship battle over the film than his own moral outrage over use of drugs. In his pre-Warhol days he had filmed a boy shooting up in a short film titled Like Sleep and he didn't seem to take particular offense at the injection action in The Chelsea Girls.)

Despite the favorable reviews of Pork in the New York Times and Art in America, the play never progressed further. Warhol's next foray into the theater would be the musical, Man on the Moon, which bombed on Broadway in 1974.