Grace Glueck's review of Pork was spread over two pages of the May 23, 1971 issue of the Times. It began on page one of the Arts and Leisure section, and a large Jack Mitchell photograph of the real Warhol with other cast members appeared on the second page of the review. 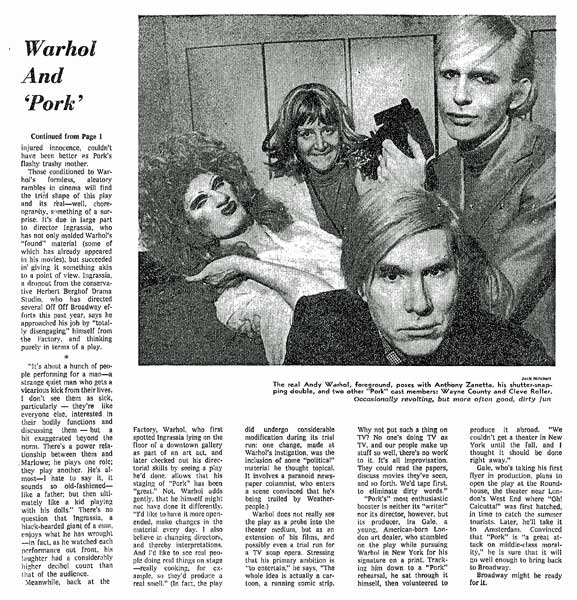 The second page of the New York Times review of Andy Warhol's Pork with a photograph by Jack Mitchell of the real Andy Warhol (front), Jayne County as Vulva Lips (left), Cleve Roller as Amanda Pork (back) and Anthony Zanetta as B. Marlowe (right).

... The Play [Pork] has just closed a two-week trial run at the La Mama Experimental Theater here and will soon open in London [and] was inspired by some taped raps between Andy and various hands at the Factory, the downtown loft (referred to in Pork as the Locale) where he makes his films. But, boiled down and punched up by an inventive young director, Tony Ingrassia, the tape transcripts have been cleverly transmuted - into a satirical show-andtellfest that, in its attempts at outrageousness, is occasionally revolting but more often good, dirty fun...

The charismatic ringleader is B. Marlowe, a deadpanned, flaxen haired voyeur who Warhol-ishly keeps a Polaroid at the ready. Playing up to him are two rivalrous sidekicks: Amanda Pork, a fat, bouncy over-achiever in drugs and sex who shoots up with a euphemism called Vitameena-Vegamin, and Vulva, a bitchy, garrulous vamp played by a male actor in drag and a Southern accent.

Marlowe's special thing, of course, is watching his pals do theirs. Chauffeured around the stage in a chair on wheels (a nice touch) he scandal-hops from table to table (the set is a mélange of the Factory, Amanda Pork's bedroom and Max's Kansas City), keeping both his ears and shutter cocked. He listens and snaps, snaps and listens, as Pork, who likes to go topless, dishes spicily about her abortions and Lesbian forays: as Vulva discusses the types of feces produced by different species, and Josie, a zaftig junior hooker, describes her customers while actually douching (back to the audience) in preparation for one. (All in all, it's a cozy bunch; take out the fornication, masturbation, defecation and prevarication with which Pork is larded you and might have a certain similarity to the juvenile gang in You're a Good Man Charlie Brown.)

Grooving on it all with the blandest of cool, Marlowe contributes only one extended monologue himself, an inclusive rundown of his days T-Viewing ("Honestly, Mary Ford looked 80, she looked like Peggy Lee!") But in the end, even he is wiped out by the jabber. Disconnecting a recorder on which he is taping Pork, he says, "Oh, I'm really so tired now," and the play is over.

Jayne County explains Glueck's reference to defecation in the play:

A lot of Pork was to do with shit for some reason. In one scene Pork talked about doing a "plate job." This involved a guy lying down with a pyrex plate over his face, and Pork had to squat down and shit on the plate while the guy moaned. We used dog food, I think, and it really looked like big blobs of shit. I had lots of speeches about different types of shit, and I had one scene that used to cause us a lot of trouble. I sat there while one of the boys spoon-fed me beans. We'd kiss and mush the beans all over our faces, then I'd talk about shit and he'd feed me some more and kiss me. After I'd eaten all the beans I got up, pulled my dress up and bent over, and the guy stuck his nose up my butt. Then I made a loud farting noise, he inhaled and went into ecstacy, and the lights went down." (JCR76)

The year after Pork was performed, John Waters (who was a fan of both Warhol and Brigid Berlin) released a film featuring an overweight transvestite who, in one scene, appears to eat shit. It's not known whether that scene was inspired by Pork or whether Waters had seen the play before making his film, Pink Flamingos.

Glueck ends her review of the play by noting that its producer "Ira Gale, a young, American-born London art dealer," planned on taking the production to London.

Ira Gale... stumbled on the play while pursuing Warhol in New York for his signature on a print. Tracking him down to a Pork rehearsal, he sat through it himself, then volunteered to produce it abroad. 'We couldn't get a theater in New York until the fall, and I thought it should be done right away.'

Gale, who's taking his first flyer in the production, plans to open the play at the Roundhouse, the theater near London's West End where Oh! Calcutta! was first hatched, in time to catch the summer tourists. Later, he'll take it to Amsterdam. Convinced that Pork is 'a great attack on middle-class morality,' he is sure that it will go well enough to bring back to Broadway.

Although it never got to Broadway or even Amsterdam, Pork did play the Roundhouse in London from August 2 - 28, 1971.

to page three (Pork in London)