Gene Swenson, Andy Warhol and the Personality of the Artist cont.

Gene Swenson's interview of Warhol in which Warhol is quoted as wanting to be a machine was part of a series of interviews by Swenson that appeared in Art News. The interview with Warhol was originally published in the November 1963 issue as part of "What is Pop Art? Answers from 8 Painters, Part I." The section on Warhol begins:

Someone said that Brecht wanted everybody to think alike. I want everybody to think alike. But Brecht wanted to do it through Communism, in a way. Russia is doing it under government. It's happening here all by itself without being under a strict government; so if it's working without trying, why can't it work without being Communist? Everybody looks alike and acts alike, and we're getting more and more that way.

I think everyone should be a machine.

Is that what Pop Art is all about?

Yes, because you do the same thing every time. You do it over and over again.

After a (very) brief discussion of the Campbell's Soup Cans, the "Death" series, and the Elizabeth Taylor pictures, Swenson asks Warhol "Is 'Pop' is a bad name?" Warhol answers:

The name sounds so awful. Dada must have something to do with Pop - it's so funny, the names are really synonyms. Does anyone know what they're supposed to mean to have to do with, those names? Johns and Rauschenberg - Neo-Dada for all these years, and everyone calling them derivative and unable to transform the things they use - are now called progenitors of Pop. It's funny the way things change. I think John Cage has been very influential, and Merce Cunningham, too, maybe. Did you see that article in the Hudson Review ["The End of the Renaissance?," Summer 1963]? It was about Cage and that whole crowd, but with a lot of big words like radical empiricism and teleology. Who knows? Maybe Jap [Jasper Johns] and Bob were Neo-Dada and aren't anymore. History books are being rewritten all the time. It doesn't matter what you do...

The quote almost seems like somebody imitating Warhol - or mixing Warhol's words with their own.

Warhol biographer David Bourdon has noted some of the problems with the interview:

This widely quoted interview is troublesome for art historians. Swenson and Warhol were good friends, but the artist was in one of his uncooperative moods, prompting the critic to conceal his tape recorder during the interview. Some of the more 'intellectual' quotes attributed to Warhol sound as if they may have been doctored by Swenson, particularly the remarks concerning the Hudson Review, a literary quarterly that Warhol was not known to read.

Swenson's discussion with Warhol was one of eight interviews with as many artists published under the title What is Pop Art? in the November 1963 and February 1964 issues of Art News. Seven of Swenson's eight interviews were reprinted in Pop Art Redefined by John Russell and Suzi Gablik (London: Thames and Hudson, 1969). Through careless editing, the last eight paragraphs of Swenson's interview with Tom Wesselmann, starting on page 118 with the question 'Is Pop Art a counter-revolution?,' are appended to Swenson's interview with Warhol. As a result of this production goof, several of Wesselmann's remarks are erroneously attributed to Warhol; these bogus 'Warhol' statements include his characterization of painting as 'audacious'; his claim that he got the subject matter from the fifteenth-century Flemish painter Hans Memling and his content and motivation from Willem de Kooning; and his avowed love for the paintings of Mondrian, Matisse, and Pollock."

Because of the Pop Art Redefined catalogue, the phony Warhol quotes are continually perpetuated. Richard Morphet, for instance, began his essay in the catalogue to the 1971 Warhol exhibition at the Tate Gallery in London with a long epigraph that ostensibly cites Warhol; the words are actually Wesselmann's. Art historian Thomas Crow also tripped up on the false Warhol quotes in an otherwise excellent article, 'Saturday Disasters: Trace and Reference in Early Warhol,' Art in America, May 1987, pp. 128 - 36. Crow had the good sense to note parenthetically that Warhol was capable of 'an inscrutable allusion to Memling as one of his sources.' Warhol, indeed, would have been unable to distinguish a Memling from a lemming. (Quoted in "What Andy Warhol Didn't Do, p. 2," here.)

Bourdon knew Warhol. He spent time with him both as a friend and a journalist - for instance accompanying Warhol and his group to Arizona for the filming of Lonesome Cowboys. His opinion is based on his own experiences and conversations with Warhol.

Bourdon may have got his information about the concealed tape recorder from an interview that Patrick Smith did in 1978 with Warhol's art assistant during the '60s, Gerard Malanga. Malanga is asked whether he (Malanga) was there when Warhol was being interviewed by Swenson. Malanga replies, "Yeah. The reason why that statement was so good is because Gene had the microphone under the table, and Andy didn't know he was being taped. So, Andy was not self-conscious when he made that statement. As with the rest of the interview, he was unaware of the fact that he was being taped." The statement that Malanga is referring to is when Warhol (in the words of Malanga) "talks about capitalism and communism as really the same thing and someday everybody will think alike." (PS391) Malanga does not, however, give specifics of the interview as a whole. (PS393)

In 2011 he wrote that Hess had "bowdlerized" Swenson's "What is Pop Art?" interviews:

Henry Martin, who is mentioned in Bill's quote, was a friend of both the artist Ray Johnson and Bill. Martin later became a Board member of the Emily Harvey Foundation in Venice.

A few years earlier, Bill had claimed that Hess had edited out the S & M content of Swenson's interviews:

What I had were two transcriptions of several tapes (I never possessed or heard the tapes).  One transcription was literal copying, with S&M questions, Gene Swenson believing that everyone was S&M, but that not everyone had the courage of their cruelties, hence the rest of us were living inauthentic lives of false consciousness and bad faith - lacking the truth of pain knowable to the slave, while the master remained ignorant of reality (read Hegel).

The 2nd transcription was as edited by Thomas B. Hess, who revised both questions and answers to get rid of the intrusive S&M images and ideas being imposed on the artists.

Bill made enquiries to see if Henry Martin still held the original transcripts of the Swenson interviews and sent me his response later that day.

Yes, I have all of Gene's manuscripts. They are not quite as conveniently placed as under my bed, but they are safe and high and dry, or were, the last time I looked, a couple of decades ago. There is finally a press that may be interested in publishing Gene's collected work, but I will really believe that when a contract comes through the mail. And that's the point at which I'll carefully compare the manuscripts to the published texts, and make the appropriate emendations, or dis-emendations. (Quoted in email from Bill Wilson to myself, July 28, 2008)

In 2014, Bill also mentioned a correspondence he had destroyed between art writer Mario Amaya and Swenson "chronicling their sado-masochistic adventures." Amaya was the editor of Art and Artists magazine and the other person who was grazed by a bullet when Valerie Solanas shot Andy Warhol.

I worked with Gene on his effective essay, "The Other Tradition," which someone has wanted to reprint as catalogue to re-doing the show in Philadelphia; ICA.  I have no news.  In criticizing Gene's themes, I was wrong, he was right, but the frictions in overcoming resistance can make illuminating sparks & set fires in Kansasiana.  I plan to re-read the catalogue in part to see if an analogue to the other tradition in aesthetics is the other tradition in loving erotic desire.  I had both sides of Gene's correspondence with Mario Amaya chronicling their sado-masochistic adventures.  Given my bad faith, repressions, false consciousness and inauthenticity, I destroyed the letters, for which Mario Amaya cursed me as a vulgar barbarian who had destroyed documents important to the history of art.  As so often, he was right, I was wrong.  Yet I sometimes still feel that I was right to be wrong in that time and in that place (I owed my survival in life to Gene, no thanks for him).  I also am aggrieved that I so underestimated the value of ART AND ARTISTS.  Maybe my writing essays for $25.00 each re-balances the spiritual accounts...

"The Other Tradition" was both an essay by Swenson and an exhibition that ran at the ICA from January 27, 1966 to March 7, 1966. The show included works by a wide variety of artists, including William S. Wilson's wife, Ann Wilson (whose name is spelled "Anne" in the catalogue), an assemblage with Anne Wilson in the title - "The Strange Case of Anne Wilson" (1966) by Mike Todd - and two works by Warhol - the Plexiglas Sleep (1965) and Still Life with Fruit (1962). The exhibition also included a work by Ray Johnson (Oedipus (1957)) from the collection of William S. Wilson.

List of works in The Other Tradition exhibition catalogue 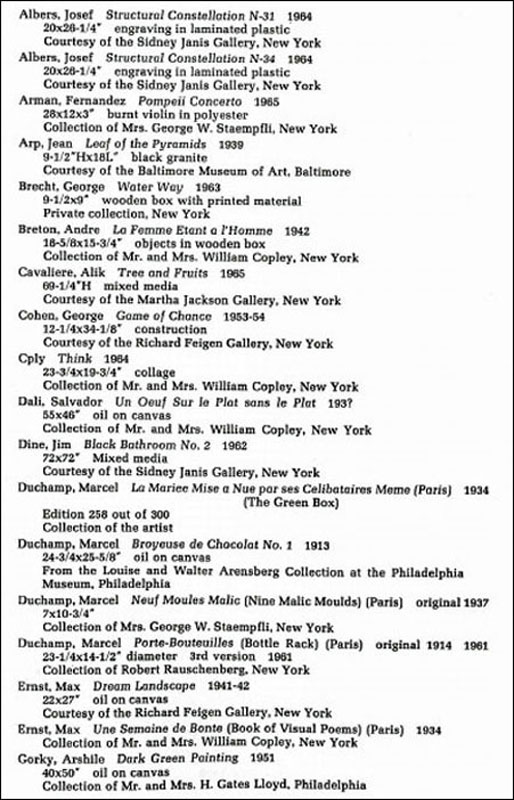 The Other Tradition exhibition catalogue, p. 44 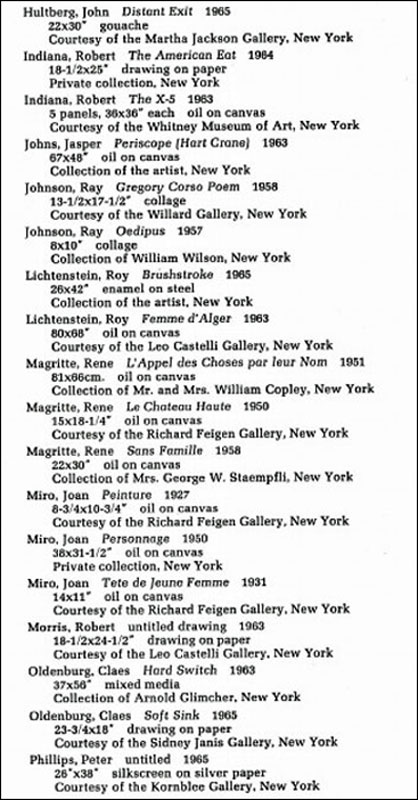 The Other Tradition exhibition catalogue, p. 45 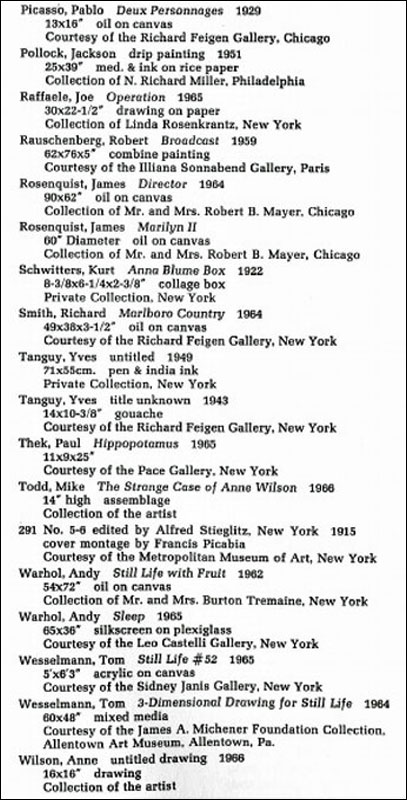 The Other Tradition exhibition catalogue. p. 46