In May 1966 Andy Warhol was presenting the "Plastic Inevitable" show (featuring Nico and The Velvet Underground) at the Trip in Los Angeles. It was around that time that McClure learned of Warhol's film version of The Beard. He mentions his problems with Warhol in a letter to Stan Brakhage dated June 6, 1966: 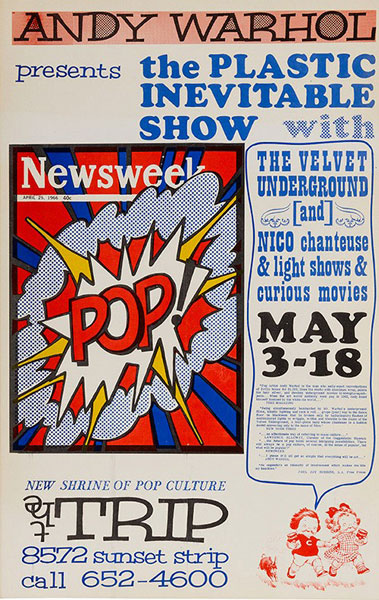 "... Warhol has caused me a lot of grief. He wrote via his apprentice Malanga asking permission to do The Beard as a seventy-minute sound film. We exchanged several letters. At first it sounded good and then finally I said NO! Then I got a card from LA with no return address saying they had gone ahead and done Beard anyway. Then there were telephone calls. And Warhol surrogates showed up in town making rumors about the film being shown in L.A. I jumped on a plane and few to LA and picked up four beautiful girls and nailed Andy at the Trip Club where he was doing his Velvet Underground shot. He showed us the film in a castle in the Hollywood HIlls and the girls and I walked out afterwards without saying a word. It was bad! Next day I phoned and told him never to show the film. Then I had three more meetings with Andy here and gave a showing of the film for Jo Anna and a few mutual friends. It looked even worse than the first time. Warhol has promised to neither show the film nor sell the prints and I have a print of it. Though God knows I don't want it." (FL101-2)

By May 1966 there had not been any performances of McClure's play in Los Angeles or New York and, as noted on page one, Warhol had not seen the December 1965 production of it. Yet, during an interview first published in 1971, one of Warhol's superstars, Ultra Violet, recalled seeing the play with Warhol but did not give a date:

"One thing really surprised me. We saw the play The Beard - I think it was in San Francisco, earlier, I can't remember - and when we came out of it, Andy said, 'God, it is beautiful,' and he really was sincere, and I was very surprised that he really liked the play. I couldn't quite understand it. I loved the play, personally, and he said 'That's how all my movies should be. My movies should be as beautiful as that play, ' and that really didn't shock me. It was hard to really understand what he meant."

The interviewer John Wilcock then says to Ultra, "McClure was not very pleased, I heard, because Andy had actually filmed his play without asking him a couple of years before." A couple of years before what? Before Ultra and Andy saw the production of the play? Warhol and Ultra Violet visited Los Angeles and San Francisco the following year and there was a production of the play in San Francisco around the same time they were there.

Warhol and his entourage traveled to San Francisco in late August/early September 1967. The trip may have also included a visit to L.A. The account of the trip in Popism trip begins "When Chelsea Girls opened at the Presidio Theater in L.A. in late August '67, Paul, Ultra, Ondine, Billy and I flew to California for personal appearances..." But the Presidio Theater wasn't in L.A. It was in San Francisco. Warhol and his entourage had traveled to LA earlier in the year to attend the Los Angeles opening at the Cinema Theatre in April 1967. An article about the April 1967 visit to L.A. appeared in the April 1967 issue (#6) of John Wilcock's Other Scenes magazine. (There was a college production of The Beard at Stanford University in Palo Alto in April 1967 but it is doubtful that Warhol and his entourage would have traveled to Palo Alto to see it.) 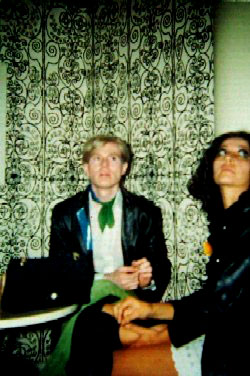 Andy Warhol and Ultra Violet at the premiere of The
Chelsea Girls at the Presidio Theater in San Francisco, 1967
(Photo: Richard Lewis)

"My last outing before I was due to head back to New York was to go to watch the crowd outside the Presidio Cinema for the premiere of Andy Warhol’s The Chelsea Girls. Sure enough a large American automobile arrived and out got Andy Warhol, Ultra Violet and Nico. They stood around for photos and then went in where they chatted to the audience and had a cup of coffee and generally hung out and made themselves available to anyone who wanted a word or a picture."

According to Lewis, that was in early September. In late August Lewis had also been to a performance of The Beard in San Francisco at the Encore Theater in San Francisco. The Encore theater was the home of the Actors' Workshop who had put on the original production in 1965. Could Warhol have attended that performance? Possibly. But that was more than a year after he filmed his version. Also, his enthusiasm for the play may have waned after his argument with McClure in 1966.

There was a production of The Beard in California in April of 1967, the year after The Chelsea Girls opened in L.A. and San Francisco, but it was neither in Los Angeles or San Francisco. It was at Stanford University in Palo Alto. It was followed in May with a production at U.C. Davis.

The Stanford Production took place on April 19, 1967 and the UC Davis production on May 4, 1967. Both performances featured the original cast of Richard Bright and Billie Dixon: 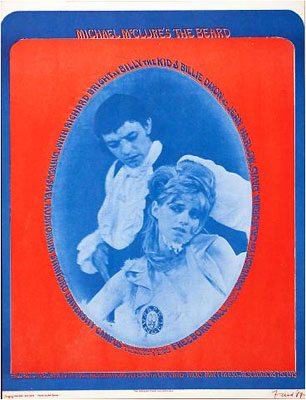 Poster for the productions of The Beard at the University of
California Davis and Stanford University in April and May, 1967

On November 15, 1967, The Beard was presented at CSU Fullerton. The Fullerton production was revisited by the student newspaper in 1998. Go here.