The Beard in New York, Fullerton and Los Angeles

The first New York production of The Beard ran from October 24, 1967 to January 14, 1968 at the Evergreen Theater which was owned by McClure's publisher, Grove Press.
(NJ) 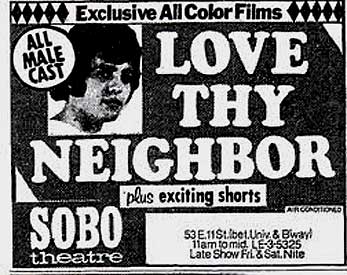 In comments about the New York production McClure refers to a second San Francisco production which might be the production that Richard Lewis attended (see page two), assuming it doesn't refer to the rest of the dates at California Hall in February 1967.

"... we waited until the play was tried in San Francisco, [where] it was protected by the ACLU and found not guilty. Then we did a big benefit for the ACLU in downtown San Francisco [at California Hall, February 22, 1967]. Then we opened a performance production of the play in San Francisco.

The Obies he refers to were awarded to Billie Dixon for "Best Actress" and Rip Torn for "Distinguished Direction" of the play. The production was Rip Torn's directorial debut.

Three weeks after the New York opening, the play was performed at the California state college in Fullerton, Orange County.

A headline referring to the Fullerton production of The Beard from the November 17, 1967 issue of the local newspaper, the Yorba Linda Star (See here)

There were three performances of the play at CSU Fullerton on on November 15, 1967. The president of the American Federation of Teachers union (local 1588) was at one of the performances and was later called to testify before the state Senate:

"When the Senate Committee investigating the campus performance of The Beard subpoenaed me the sense of 'everyone’s gotta be somewhere' was particularly intense. Why was I so frequently on the scene? I didn’t plan it. Why was a Professor of Physics the next to testify after the Chancellor and the President? I frequently attended theatrical performances on campus. I was walking down the hall when I noticed that a play was being performed. I walked in on The Beard. It was supposed to be an experimental performance. A member of the Yorba Linda Star had gained admittance and wrote a scandalous review which outraged some members of the community. It quickly became a political football playing to the grandstand. A Senate Committee consisting of three John Birch Society members was convened to exploit what they perceived was a great political opportunity to denigrate the university and to ingratiate themselves to their constituency. The director of the play, Ed Duerr, was a union member near retirement. I was President of the union...

The Chancellor of the California State University system was the first witness, followed by the President of the University. They both reiterated the mea culpa defense, attributing the performance to an isolated failure of judgement of an ordinarily reliable faculty member. I was next. We were all provided copies of the script in advance. Senator Schmidt, who ran for President on the American Independent Party ticket... began the questioning. He asked me if I thought that it was appropriate for such a play to be performed on a university campus.

I replied, 'Certainly!'  or something similar, according to my current recollection.

He pressed me. 'How can the performance of such an obscene play possibly be justified?'

'Well, for one thing, because of its social significance.'

'What ‘social significance’ (with a smirk)?

'Consider the protagonists, Billie the Kid and Jean Harlow, not Albert Einstein and Susan B. Anthony. That is a comment on the character of American heroes.'

'Not at all. In classical literature a similar theme has been pursued. Usually people can recall only one of the parts of Dante’s trilogy, The Divine Comedy, 'The Inferno,' 'Purgatorio' and 'Paradiso' are not considered to be great literature. Why not? Perhaps because the pain of the fire and tortures to which victims were subjected were close to human experience…

I had a special interest in Michael McClure’s play, The Beard, because he was an overdone Reichian as Reich was an overdone Freudian. After the performance on campus, Robert Gish, a prominent Hollywood director... directed the play in the Coronet Theater [Walker Playhouse] on La Cienega in Hollywood, only to be arrested night after night until finally a court injunction against the police was obtained…

I was unable to complete my prepared arguments before Schmitz interrupted me. He had heard quite enough. … Schmitz was the darling of the right wing. His platform supported “family values”, perhaps had set a poor example. He was also anti-homosexual, genderist, anti-communist, pro-gun, and anti-Semitic,  He was the first member of the John Birch Society to be elected to the California State Senate. “

The result of the California Senate's investigation was the introduction of of Senate Bill No. 487 on February 29, 1968 which warned that "every student... and every teacher or school official who knowingly permits... any simulated act of sexual intercourse or deviate sexual conduct occurring during the course of a play.... is guilty of misdemeanor." The bill was passed on May 9, 1968 after one amendment. It then went to the California Assembly where it died in committee. 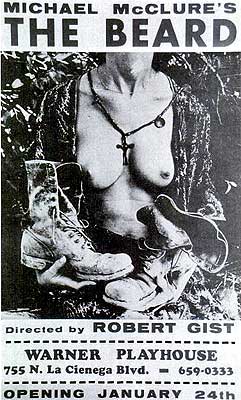 The poster for the L.A. production was designed by the artist Wallace Berman. The woman holding the boots is Shirley Berman.

The first L.A. production opened on January 24, 1968. Some accounts, however, mention it as though it was 1967. George Herms listed an "environment" for the lobby of the production in the 1967 section of his CV as : "Environment for Lobby of The Beard, a play by Michael McClure, Warner's Theatre, Los Angeles." (The venue was actually named the Warner Playhouse and should not be confused with Warner's cinema.)

"The Doors began recording their second album with Paul Rothschild and engineer Bruce Botnick at Sunset Sound in May 1967... Poet Michael McClure, deeply impressed by the visionary poetics of the Doors' album, visited during the sessions and exchanged phone numbers with Jim. The Doors then went back on the road, only returning to the studio later in the summer after it had upgraded to eight tracks from four. Jim and Pamela went to see the L.A. production of McClure's play The Beard, in which Dennis Hopper, as Billy the Kid, tore off Jean Harlow's panties and pretended to pleasure her with his mouth... Unlike in San Francisco, the local vice squad didn't intervene."

According to McClure, however, the cast of the L.A. production were arrested fourteen nights in a row. In a letter to Stan Brakhage c. September 7, 1968, McClure complains, "I'll have to return to L.A. for the opening of the trial of Beard, which starts September 16."
(FL141)

"... we went to Los Angeles, where we lost Billie Dixon from the cast and worked with a young woman named Alexandra Hay, as Harlow. We had Dennis Hopper in it but there was a lot of hassle keeping Dennis because of his confrontations with the producer. At last, we got Richie Bright again as The Kid, and had Alexandra Hay, a young starlet, as Harlow. But in the meantime The Beard had been done without my permission in [Fullerton] Orange County.

There must have been twenty newspapers in Orange County at that time, all extremely right wing, [which] ran banner headlines against the ‘filthy’ play that had been produced at Fullerton State College. The students had done an unauthorized production without my permission or knowledge.

Then the LA Times took it up, running two editorials against the play, while it was in rehearsal, while we were preparing for opening - two editorials against the play and other actions and threats from the FLO, the Forces of Law and Order. We knew we were going to have major trouble, and when the play opened it was arrested 14 performances in a row. The police would come in at the end of the play, walk backstage, arrest Jean Harlow and Billy the Kid, after they’d had a standing ovation from the audience, lead them out back onstage to the police car again, and the audience gave them a second standing ovation before they went off overnight to the jail, where we were being bailed out by a liberal, moneyed person. Then the theater was burned down by vandalism and we went to another theater. Eventually the play was found not guilty of obscenity..." (FL211n.4)

Although Jim Morrison did attend the L.A. production as noted by Stephen Davis, McClure had actually met Morrison in New York originally. At one point during their friendship, a film version of the play starring Morrison was considered.

"The way I got to know Jim was this. I had read a magazine piece about him that interested me. He was discussing the concept of evil in a way that made me feel we shared some insights. So Mitchell Hamilburg, the literary agent, got us together while my play The Beard was playing in New York. Jim was, of course, interested in the theater, and Mitchell knew Jim because he knew Pam, so he introduced us at some bar in the Village and we started talking...

Later, we met in L.A. pretty often to talk and drink together... Jim and I talked poetry and drank in L.A. while The Beard was running there. He was interested in writing a play himself, and he liked mine. Then, a while later, I got a call from Elliott Kastner, a film producer based in London. His idea, which turned out to be unworkable, was to film The Beard with Jim playing the part of Billy the Kid. Jim was already in London, so I flew over. On the plane, I imagined that I saw Blake and Shelley floating through the air above the airport, and never having been to London before, it seemed only natural that they float in the air above the airport, so I landed and told Jim about that and we went out and started going to the Soho clubs, and it was quite a night. The bobbies busted us a couple of times for being drunk and disorderly..."

The film of The Beard with Jim Morrison never got made. The Warhol film version, starring Gerard Malanga and Mary Woronov, never got released. McClure recalls, "Attorney Melvin Belli sent an injunctive letter to Warhol warning him never to show his film of The Beard or toy with my property again." (FL125)