The following interview of Geri Miller (aka Gerri Miller aka Jeri Miller) by John Calendo appeared in the May 1973 issue of Interview magazine:

my naughty, naughty ways as told to john calendo 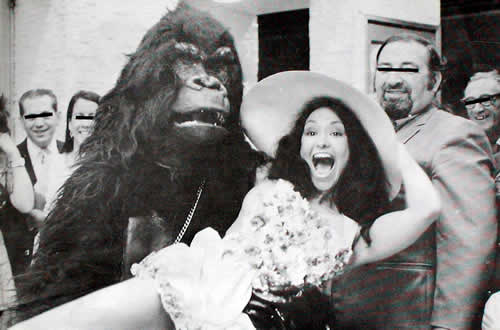 Tell me the first three things that come to your mind when I say Gerri Miller, who are you?

I've heard you refer to yourself as a Super Groupie. What does that mean?

It's a girl who only goes out with the Super groups... like the Beatles are a super group and I went out with one of them.

He was dumb. You see I'm stupid in the same way he was stupid and I like someone who's really intellectual.

Was Ringo a nice guy?

Well, sugar, everybody's nice when they want something from you.

Who were the best lays?

Sexually, the guitar player in Rare Earth. Mentally, James Brown and dancewise too. Lou Reed is wonderful but I've done nothing with him. Physically, Jagger gets four stars but personality-wise he's the worst. He wasn't so fabulous to me. He was just average.

Did you sleep with him?

No. Bianca was there! He just kissed my hand. He wasn't outrageously friendly... he seemed kind of conceited.

You're a superstar, Gerri, and you must have had other stars you admired as a child. Who?

Oh, Marilyn Monroe!!... (giggles) She was funny and sexy nad most people are one or the other. Most people who are funny aren't sexy, and most people who are sexy can't be funny. There's no one who's funny and womanly sexy... except I think I am! And I think that's why I liked her because she reminded me of myself even when I was little... I liked Roy Rodgers (giggles). I loved his eyes because they were Chinese-like. I liked how he didn't ride a horse real good, I can't ride either so that's what makes him like me. And oh, I liked Flash Gordon. I liked his ray gun. As a teenager I liked Gilbert Roland.

He was an old star, wasn't he?

Did you like any singing stars when you went to high school?

How did you feel when he went into he Army?

Did you miss him?

No... I don't like anyone who likes to fight. I didn't think he was what I thought he was, to be able to kill people! Now I see that his singing stinks. But then it was something new and I love how he wiggled on television. I think that's it. I loved his wiggling rather than his singing.

Surely you must have found the way Liz Taylor looked to be an inspiration.

Oh yeah, she used to be my idol, but she got chubby and she let me down. I think it's selfish of her to let herself go because when people idolize you, you owe it to them to be beautiful. Now she just throws her fans away. Like, Loretta Young didn't let herself go just because she got older. Why did Elizabeth Taylor have to? Because she's selfish, that's why.

I was always getting hollered at by teachers. I flunked Geometry because my math teacher liked boys better than girls. I was fabulous in English 'cause my teacher was so wonderful. I think that's why I'm a good actress because I had such a great English Lit. teacher. She'd make Shakespeare and Chaucer and eveeryone seem so fabulous. And my Gym teacher was a lesbian.

No... and neither did the guys. One day when I was walking around New York I ran into a girl from Clifton and she was married to another Cliftonite and they both had heard about me acting in TRASH and they told me to call them. And I said, "How come you're so friendly to me now, and in Clifton you weren't!" And they said the boys really liked me then but they were afraid of me because I'm so agressive and I always did what I wanted and guys are afraid of that. Like, hardly anybody moved away from Clifton. That's how chicken they are! Girls didn't like me 'cause I always could get real handsome guys. The boy I had was a high school hero, you know... the one who made the touchdown every week... and I thought he would be another Joe Namath and he went to college and in college he didn't even make a touchdown so I didn't want to see him anymore (giggles)... he was gorgeous but he was dumb. He was from Passaic and he went to school with the Shirelles. One time I went to his auditorium to see a high school show and imagine seing the Shirelles for nothing! He also would sing with this group every week and guess who this group turned out to be?

No!! The Happenings! You remember them.

Oh, a real big one! Aaaah, I forget it too! Oh sugar! Don't you remember the Happenings? They had two hits!... So anyway, my boyfriend used to sing with them until they got famous. My boyfriend asked me to marry him when I was working at the Peppermint Lounge, but I didn't want to marry him because I saw he would always watch television and drink beer, and I want someone who could do more things. I want someone who could do everything.

Where do you work now?

At the Peppermint Lounge or the Carnival.

How do you answer people who accuse you of performing 'obscene' acts in 'pornographic' movies?

"Drop dead!" I answer them!

What was the hardest lessson you had to learn about being a professional Go Go girl?

To keep my mouth shut and not lose the tempo. When it's cold you're not allowed to tell the owner to please put the heat on, or they tell your agent they don't want you back. It's like the owners don't care who you are because one tit is the same as another. They care more about girls sitting and pushing drinks. It's really getting cheap. I try to be classy anyway. It's just a way to earn a living for what I really want to do. I am an actress.

What is your favorite color?

Pink... Why do you have a question like that?

What is your favorite time of day?

What is your favorite perversion?

What does that mean?

Do you mean what other peole call perversion?

You could interpret the question that way if you like.

Ummm... I like to clean my ears with Q tips.

Do you do it in a perverse way?

Oh! Everybody in England's a Capricorn. I guess that's why it's so respectable. Capricorns are serious and practical and have a dry sense of humor. Look it up in a horoscope book... oh yeah, I suppose I should mention that I'm in a new movie, BLADE. I play a dumb girl with big tits (giggles).

Don't laugh! Look where it got Jayne Mansfield.

Yeah, on the road with her head...

Let's not be morbid. We're all going to go someday.

Yea, but I don't want to go with my head off... I want to go giving head!!! (giggles)... Hey, maybe that's why Jayne Mansfield's head got rolled off. She probably was doing that and they got in the car accident. Sure, that's it, John, I'll bet you! She was doing it and they got hit by the other car and her head got cut by something...

Let's not linger on that, Gerri...

But how else would her head pop off unless...

Anyway, when you get to Hollywood, what movie stars would you like to sleep with?

Marlon Brando. The way he talks just freaks me out. And Eddie Albert Jr. and the guy in LADY SINGS THE BLUES.

Yeah, him. James Caan turned me on... but then I saw a bald spot (laughs)... There's old Stars, but they're not around. I would have liked Clark Gable, and James Cagney I'm crazy about. But he doesn't look the same anymore. Clark Gable and Jimmy Cagney, man, they didn't take nothing from a woman. They were real men. I love that.

Tell me the first three things that come to your mind when I say, Gerri Miller, where are you going?