The New York Times is reporting that the Chelsea Hotel (aka Hotel Chelsea) will be closing for extensive renovations and that Saturday night, July 30th, was the last night that the hotel would be open to new guests although the hotel's 100 permanent residents are reportedly going to be allowed to stay. According to the Times, "The building is to be sold for over $80 million to the developer Joseph Chetrit, though the deal had not closed as of Sunday..." The site was, of course, used by Andy Warhol for filming some (but not all) of the The Chelsea Girls.

The full article can be read here.

Andy Warhol party at the Gershwin on August 2, 2011 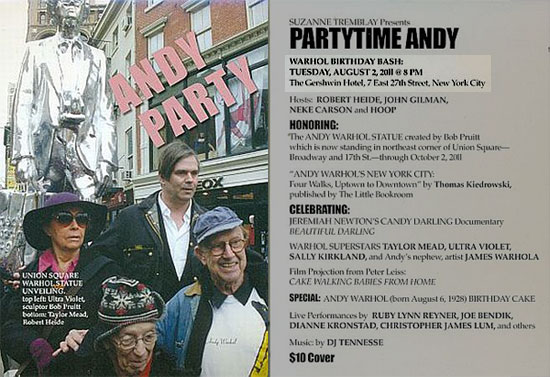 Lupe and Flaming Creatures at the Film-makers' Coop

Andy Warhol's Lupe and Jack Smith's Flaming Creatures will be presented by Keegan Goodman at the National Gallery of Art in Washington, DC on 31 July 2011 at 5 pm. The screening is part of a series celebrating the fiftieth anniversary of the Film-makers' Coop.

Congratulations to Vincent and Shelly Dunn Fremont who recently celebrated the wedding of their daughter Casey Fremont to Brandon Crowe at a party at the Fremont's place in the Hamptons. Guests included Bob Colacello, Brigid Berlin, Deborah Kass, Jane Holzer and the new permanent director of The Warhol, Eric Shiner. The bride wore a dress designed by Robin Brouillette.

Donald Lyons, who appeared in Andy Warhol's Kitchen, Afternoon and Restaurant, died on 12 July 2011 at the age of 73. After leaving Warhol's Factory, Lyons went on to serve as the drama critic for a number of publications, including the Wall Street Journal and the New York Post.

An obituary for Lyons published in Playbill magazine can be found here.

An interview with Mary Woronov by Lyons can be found here.

Sony Legacy is releasing a box set titled 15 Minutes: Homage To Andy Warhol, to coincide with Warhol's 83rd birthday and a traveling exhibition titled "15 Minutes: Homage to Andy Warhol." The exhibition opens at the Pollock-Krasner House & Study Center, East Hampton, NY on August 4, 2011 before travelling to The Warhol museum in addition to the Burke Library at Hamilton College in Clinton NY and the Case Geyer library at Colgate University in Hamilton NY.

The deluxe version of the package (produced in a limited edition of 85 copies) includes four vinyl records, three CDs, artist photos and sixteen 12" x 12" numbered silk screen prints (stamped by their creator), issued by Alexander Heinrici. The standard version (limited edition of 1,964 copies) will cost $600 with offset lithographs of each work of art rather than a silk screened image.

The project has been put together by Jeff Gordon and his partner Path Soong who previously produced Two Dialogues, a CD featuring interviews with Jackson Pollock and Lee Krasner.

There will be a book signing celebrating the publication of Andy Warhol's New York City: Four Walks, Uptown to Downtown on July 13, 2011 at the Clic Bookstore and Gallery in New York from 6 - 8 pm, followed by a party at the Yotel Hotel. The book is published on the previous day - July 12th.

Both the author of the text of the book, Thomas Kiedrowski, and the illustrator, Vito Giallo (who was also Warhol's commercial art assistant in the 1950s) will be at the signing and the party. Vito used the same blotted ink process in creating his illustrations for the book that Warhol used for his commercial work in the 1950s.

About the same size as a Michelin guide, Andy Warhol's New York City contains four fascinating walks exploring the various places that Andy Warhol lived in, worked in and played in. Among the interesting items in the book are the architectural drawings of Andy Warhol's Andy-Mat which got much further in the planning stage than is usually recognized.

"Warhol asked close friend and society hostess Maxine de la Falaise McKendry (she appeared in Warhol's Dracula) to prepare the menu for the 115-seat Andy-Mat, which she did with guidance from Tony Berns of the restaurant 21... The seventy-five items were to be priced between $1 and $5.75 and included shepherd's pie, fishcakes, Irish lamb stew, fried onion tart, mashed potatoes, key lime pie, champagne fruit drinks, milk over ice, and a choice among four omelets... The orders were to be placed directly by the customer to the kitchen via a system of pneumatic tubes for there would be no in-house chef. All food was to be prepared off-site, frozen, and delivered to the franchise to be reheated. The original concept was for a 'sit-down supermaket' and came together with the help of Bob Peltz, the king of frozen food at the time. The architectural team of Araldo Cossutta and Vincent Ponte drew up blueprints to turn a former Gristedes supermarket into a semi-classy fast-food haven utilizing simple geometric shapes. Ellen Lehman McCloskey designed the interior... The investors had already spent $40,000 in rent and secured a million in capitalization when the project fell apart."

The sites of all four of Warhol's "Factories" are, of course, listed in the book, as is his very first studio - the disused fire station at E. 87th St. which still exists. A star system is used to indicate which sites still exist or have been "repurposed." Sites which have been razed are also indicated.

Warhol's Manhattan residences are also included as are the other properties he owned - the building at 57 Great Jones St. (where Jean Michel-Basquiat lived and died) and 342 Bowery (where Jay Shriver lived).

The book is a treasure trove of information about Warhol and is as much as a biographical account of his time in Manhattan as a guidebook. Even if you have no plans on visiting New York in the new future, this book is well worth having. If you live in New York, it's indispensable. Highly recommended.

The Clic bookstore is located at 255 Centre Street in Manhattan. The Yotel is at 570 Tenth Avenue & W. 42nd St. Details of the book signing here.

A group show at the Jardin de las Esculturas (IVEC) in Xalapa, Mexico, opens on July 6, 2011 which includes the work of Jerónimo Rosales (aka Contempoboy) - the artist who did a series of graphic works based on the account of Arshile Gorky's death in The AbEx Chronology section of Warholstars.

Are you a Diva?

The Lowery in the U.K (which is currently hosting the "Andy Warhol & the Diva" exhibition) is looking for Divas. The best will be included in their online "Diva Gallery."

Details of the exhibition here.

Image Machine: Andy Warhol and Photography at The Rose Art Museum and The Cincinnati Center of Contemporary Art

A new exhibition focusing on Andy Warhol's use of photography is due to run at The Rose Art Museum (Brandeis University) from January 16 - June 24, 2012 followed by The Cincinnati Center of Contemporary Art from August - December 2012. Further details will be posted here as they become available.

Andy Warhol's Electric Chairs and Last Suppers are being exhibited until July 31, 2011 at the the Turku Cathedral Museum in Turku, Finland.

The Art Newspaper's article about the exhibition can be found at: here.