to "March 3, 1966: Kitchen premieres at the Film-Makers' Cinematheque," here

Edie Sedgwick in Kitchen: "I live my part too - only I can't figure out what my part is in this movie." 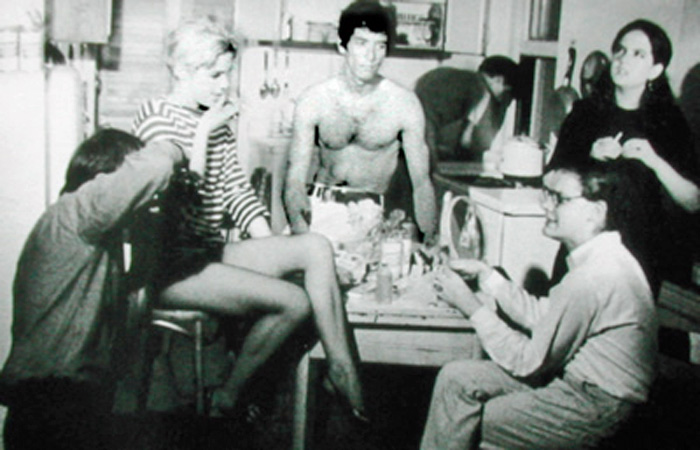 "... Warhol said to me, 'I want several things this time. First, I want a vehicle for Edie Sedgwick. We're going to make her our Superstar. She will be the queen of the Factory, and I want it in a kitchen because I want, now, white. Completely white... I want this one more involved than any of the previous ones.' So, I said, 'So you want a plot?! said I in complete amazement, and then, he said, 'No , I don't want a plot, but I want a situation or situations.' I said, 'Okay.' And then, I brought him the script, and... I think he read it right there and said, 'This is the best thing you've done.' I don't think so, but as a film - it was clearly the most developed as a play. And then he wanted to direct it. So, we really co-directed it, and this was the first time. I mean, he sat and rehearsed it. He was very interested clearly in her, and this was a break for her." (SG502)

Kitchen was filmed in the kitchen of Bud Wirtschafter, who was the sound man on several early Andy Warhol films. (DB206/POP119). Although it was meant to be the vehicle that would propel Edie Sedgwick into stardom, she spent so much time going out every night and getting stoned that she had difficulty memorizing her lines. Ronald Tavel thought that Chuck Wein, Edie's friend from Cambridge who was trying to promote her in New York, purposely encouraged Edie to get stoned to sabotage the project because "it was obvious that Sedgwick and I made a good team."

According to Tavel, Chuck Wein told Edie that "memorizing lines was old fashioned" and "what you [Edie] should do is just walk in front of the camera and improvise and say whatever you want." Because of the difficulty Edie had with her lines, they hid scripts all over the set - in the cabinet, under the table and inside the refrigerator. Edie was told to sneeze whenever she did not know her lines. (SG502)

Tavel described the filming as "chaotic". Edie would "skip things or go back or not find her place, and she was sneezing all over the place... Also, some actor was put into it at the very last moment. Someone didn't show up." (SG502) The result was that Edie appeared to have a bad cold in the film. Her sneezes become the comic highlights of the film.

Sedgwick then goes on to verbally list the props ("kitchen table and chair, kitchen sink... litter basket (sneeze)... a malted machine...") and then describes the set and the location of the scripts that are hidden on the set: "one wall of the kitchen is in frame and a calendar is on that wall which is not actually a calendar but a copy of the scenario. Several articles are on the table and hidden between them is another copy of the scenario. There is also a large book on the table or two or three books and copies of the scenario are hidden in the books. When the actors forget their line (sneeze), they should pretend to be reading the books or can get up and go over to the calendar on the wall and read until they reach the place they want as if they were tearing off that date."

Edie enters the kitchen with her bag, opens it, takes out a make-up mirror and puts it on the table. Rene Ricard enters and spends most of his time with his back to the viewer, washing dishes at the sink. As Edie applies her make-up, a photographer (David McCabe) enters, photographs her and exits (RRP). Edie seems at a loss as to what to do, looking off the set as if to seek direction. Trudeau enters, kisses her on the back of the neck and sneezes and they both sit at the kitchen table not knowing what to do. Out of nowhere, Trudeau says "litter basket" in an attempt to spur Edie to say her lines. She asks him what he said and when he repeats it, Edie says, "I know you said litter basket dear, but what am I supposed to do about them?" Trudeau responds "rummage around in them", and Edie starts going through the litter basket taking out the clothes that are in it and putting them on the table, then putting them back into the litter basket (in between sneezes).

The film continues, directionless. At one point Sedgwick lies on the table and does bicycle type exercises with her legs. Trudeau tells Edie that he had sex with someone in the shower that afternoon, to which she replies, "how nice." When Trudeau suggests they go to the beach that night, "when it's dark and there's no one around...", Edie puts him off saying "you know how much the sand hurts..." At one point she pretends to be his mother, giving him a short spanking. When Roger begins a monologue on second hand clothes, Edie gets up and turns on the malted machine drowning out any dialogue.

Throughout all this, there is a lot of sneezing and whispering by someone off camera who tries to feed Edie her lines. Toward the end of the first reel, Edie starts laughing and makes dancing motions with her hands as the sound of the malted machine continues to make dialogue impossible.

The second reel begins with the a shot of the set with the actors getting ready - Edie is studying a script and sets it down near the stove in case she needs to refer to it. A male voice, sounding like Donald Lyons is heard offscreen announcing: "Reel 2 of Andy Warhol's Kitchen starring Edie Sedgwick" and then goes on to announce the other actors as well as the "technical assistant", Gerard Malanga. This time the voice includes directions as to how the actors should act.

The malted machine is turned on at the beginning of the reel for continuity, but then is turned off, with Edie saying: "Thank god the sound of that awful machine is over."

Donald Lyons enters the kitchen with a mattress and Electrah. Edie brightens up when she sees him - as though she is relieved that someone has arrived that she can relate to - a camp queen. When Edie asks him if he would like a coffee, he responds: "I like my coffee hot, sweet and black, just like my men." When Trudeau says, "so you like your men black", Donald replies "white, green, purple..." then later says "let me tell you about this fabulous mexican..."

When Edie spills the coffee on the table, she offers layer cake to the other actors. Donald says, "Thats the story of my life too, one meaningless layer after another." Edie then starts crying, saying "That's just it, I don't have a layer of my own." Trudeau attempts to cheer her up by telling her that she really is an attractive girl to which Edie responds, "Attractive! How can a two headed girl look attractive?" Donald tells her, "Well my dear, your two heads are attractive." Her response is to push Donald over in his chair - after which she screams to Electrah, "Do you dig sleeping with cripples?"

Chewing gum and fidgeting like a speed freak, Electrah eventually goes into high monologue mode - about what Trudeau does to Edie when they are in "dark doors" - saying to Edie that "he does dirty things between your legs". Edie and Donald ignore her, silently hamming it up to draw attention away from her. Edie eventually shuts her up by saying "Would somebody turn on the malted machine" and asks Donald, "what the hell is she talking about?"

The film becomes even more directionless toward the end, after Edie burns her hand on the kitchen stove and different suggestions are offered as to how to deal with the burn - should they use butter or salt?

The actors no longer think they are being filmed and make no effort at performing for the camera - Gerard Malanga wanders in and grabs a cold drink from the fridge and the film ends.

When Norman Mailer saw Kitchen, he gave this overly intellectual analysis of it:

"I think Warhol's films are historical documents. One hundred years from now they will look at Kitchen and see that incredibly cramped little set, which was indeed a kitchen; maybe it was eight feet wide, maybe it was six feet wide. It was photographed from a middle distance in a long, low medium shot, so it looked even narrower than that. You can see nothing but the kitchen table, the refrigerator, the stove, and the actors. The refrigerator hummed and droned on the sound track. Edie had the sniffles. She had a dreadful cold. She had one of those colds you get spending the long winter in a cold-water flat. The dialogue was dull and bounced off the enamel and plastic surfaces. It was a horror to watch. It captured the essence of every boring, dead day one's ever had in a city, a time when everything is imbued with the odor of damp washcloths and old drains. I suspect that a hundred years from now people will look at Kitchen and say, 'Yes, that is the way it was in the late Fifties, early Sixties in America. That's why they had the war in Vietnam. That's why the rivers were getting polluted. That's why there was typological glut. That's why the horror came down. That's why the plague was on its way.' Kitchen shows that better than any other work of that time." (EDIE234)

to "March 3, 1966: Kitchen premieres at the Film-Makers' Cinematheque," here