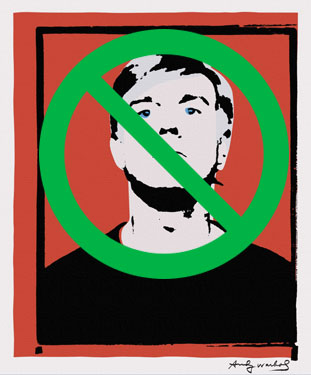 The April 7 - 27 issue of the New York Review of Books features an article, "What Andy Warhol Did," by the chief art critic of The Daily Telegraph, Richard Dorment, about the end of the $20 million lawsuit between Joe Simon-Whelan and the Warhol Foundation et al. In response, I've added to the site my own thoughts about whether or not the Self-Portrait in question is authentic in the form of an essay - "What Andy Warhol Didn't Do." No paperwork relating to the Self-Portrait or the series it comes from has ever been found in Warhol's archives. Warhol never mentioned the series in his lifetime and the first time that any of the paintings from the same series went up for sale at a public auction was after Warhol's death. The essay can be found here.

Beautiful Darling to have its NYC theatrical premiere on April 22nd 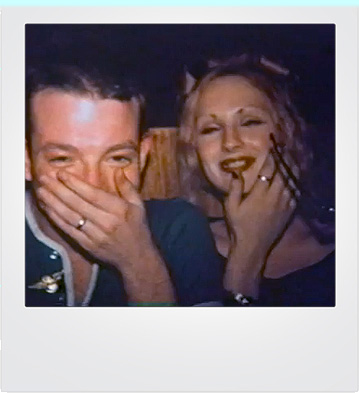 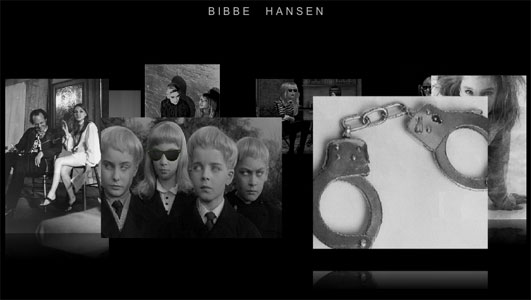 Bibbe Hansen's website has been re-designed. The new website (designed by Sean Carrillo) includes a bio, a gallery of photos and a clip of a virtual Bibbe doing a virtual performance of her father's Car "happening." The biography includes a link to "The Secret History of The Whippets" - the band that Bibbe performed in during the '60s, along with Jack Kerouac's daughter, Janet. At the end of the The Whippets essay is a link which will take you to their recordings - sung with de rigueur fake English accents. (I've adopted the beginning of "Go Go Go with Ringo" as my ringtone.)

"Charlotte Rosenthal, Janet Kerouac and I were all downtown street kids in 1964 New York City. While panhandling, we three met songwriter Neil Levinson ("Oh, Denise") and hustled bus fare from him. On the bus ride we fell to chatting. The Beatles had just come out big in the US and Neil had written a girl-song response to “I Want To Hold Your Hand.” Would we be interested in hearing it? We met him later that day at Steinway Studios on 57th Street and together finished the lyrics and music for “I Want To Talk With You.” It was a classic girl group riff and we dug it. That same day we went to a half dozen record companies auditioning the song without any takers. As a last resort, Neil called Colpix label’s Don Rubin from a payphone. When Don said he would see us we ran all the way over to the audition. We sang the song and within the next couple days we were signed to Colpix and to DuLev Productions..."

The Andy Warhol statue is unveiled in New York 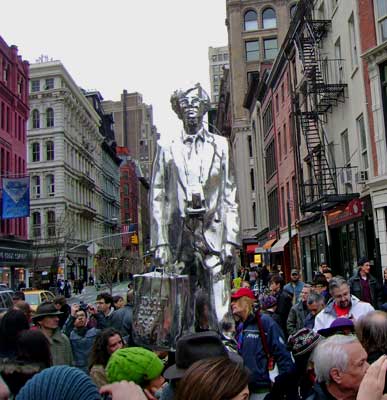 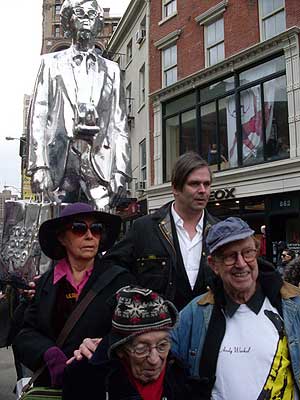 The statue will remain in its location at 17th and Broadway until October 2nd.

Wynn Chamberlain is returning to Manhattan (from Morocco) for the first time in over a decade to participate in a panel discussion at the screening of his underground classic, Brand X. Cast includes Taylor Mead, Candy Darling, Tally Brown, Sally Kirkland (who was one of Andy Warhol's Most Beautiful Women and more recently played Edie Sedgwick's grandmother in Factory Girl) and Frank Cavestani (who appeared in Women in Revolt). It will be the first showing of the film in more than 40 years.

Wynn was with Andy Warhol in Old Lyme when Warhol shot early film footage with a 1929 Bolex movie camera owned by the father of Wynn's wife. He also accompanied Andy Warhol on the trip to L.A. in early October 1963 - when Warhol filmed footage for Tarzan and Jane Regained, Sort Of...

Factory photographer and Warhol star, Billy Name, will be having an exhibition of his work at the Albert Shahinian Fine Art Gallery from April 2 - May 22, 2011. Events include a "Meet the Artist" talk in the upstairs galleries on April 30. Highly recommended.

Factory People, the documentary about Andy Warhol and his cohorts at the Factory, will be shown on television in the U.S. on Monday, March 28 as well as March 30th and May 17th.

Brand X on the Bowery 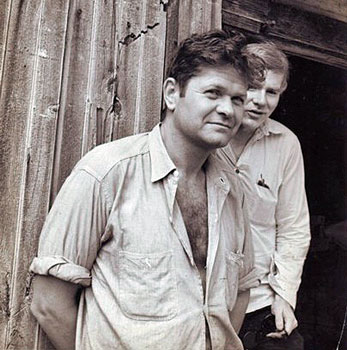 Photos of opening of "Slavs of New York" exhibition 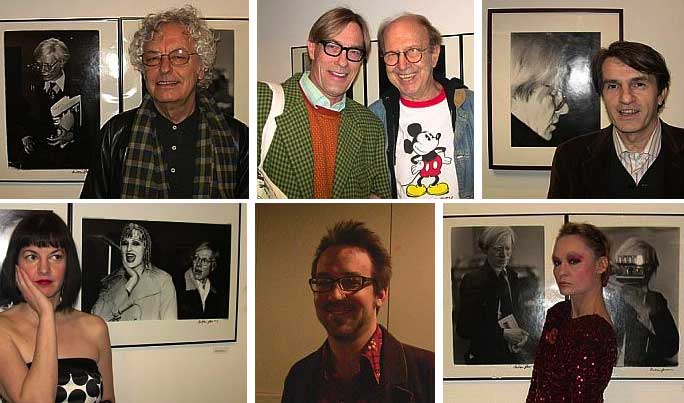 The "Slavs of New York: Andy Warhol's Nowhere" exhibition opened at the Millenium Gallery on E. 4th St. in New York on March 16. Georg Misch's excellent film I am From Nowhere (co-produced by the BBC) was also shown on the evening of the opening.

The exhibition includes work by Anton Perich (born in Croatia), Gretchen Berg, Sebastian Piras, David Shankbone and others - and runs until March 30th.

More information about I am from Nowhere here. 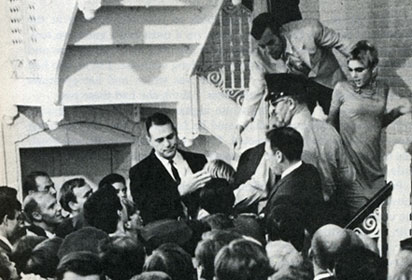 Sam Green, the curator responsible for Warhol's infamous 1965 ICA exhibition where Warhol and Edie Sedgwick were mobbed, died on March 4, 2011. He was born on May 20, 1940.

His obituary is here.

Andy Warhol Divas at The Lowry

"Warhol and the Diva," an exhibition of work by Andy Warhol featuring divas such as Marilyn Monroe, Grace Jones, Liza Minnelli, Debbie Harry, Pia Zadora, Jane Fonda, Mick Jagger and Warhol himself, opens at the Lowry in Salford on 25 June and continues until 25 September 2011. The show is curated by Kate Farrell.

Joe Dallesandro is NOT appearing at Shock Stock in Canada

Warhol star Joe Dallesandro was originally scheduled to appear at Shock Stock in Canada on the 29th and 30th of April, but he will no longer be appearing there. Contact the festival organizers for details of the event. 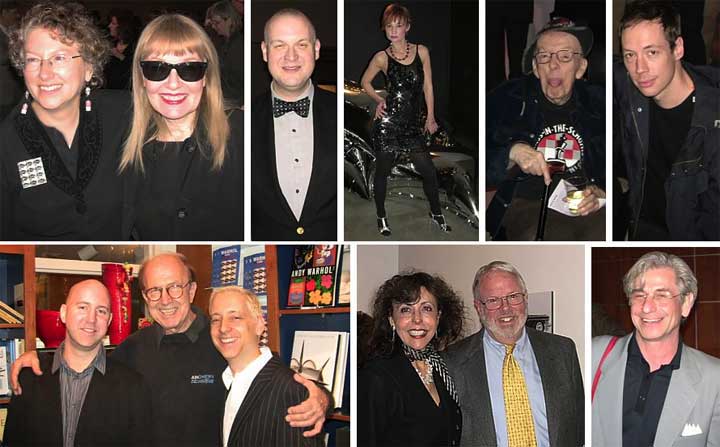 Hoop of Hoopmobile fame was at the opening party and reports "It was the exclusive opening for press, members, patrons and VIPs.- a great turnout and surprising that New Yorkers like Taylor Mead would venture all the way into New Jersey for the show - but it was worth the trip. There were approximately 50 objects in this exhibition - drawings, silkscreens, photographs, videos, catalogues, models and floating silver pillows. The show was the inspiration of curator Gail Stavitsky. In the 1990s she helped the museum aquire the Warhol work 12 Cadillacs for their permanent collection. The 80 plus page catalogue of the exhibition is very informative and well - illustrated. After viewing the show people were invited to a wine and dessert reception. A few museum people gave a bit of information about other shows in the building including a Maplethorpe Flowers installation."