March Madness at the Gershwin Hotel

Robert Heide, John Gilman, Neke Carson and Hoop are holding a night of madness at The Gershwin Hotel in New York on Friday, March 19, 2010 beginning at 8 p.m. The event is in honor of the new biography of Warhol, Pop: The Genius of Andy Warhol, the new edition of Night magazine (from Anton Perich and Robert Rubin), the late Baird Jones and Warhol stars Ivy Nicholson and Taylor Mead. Special attractions include Danny the Wonder Boy, the Sissies ("and a hunky array of hot musclemen") and an appearance by Phoebe Legere, with music by D.J. Tennessee.

Caffe Cino playwright, actor, and New York legend, H.M. Koutoukas (Harry Koutoukas) died on Saturday March 6, 2010 in New York after returning home from a trip to London. A memorial is planned for Thursday, March 11, 2010 at the Judson Memorial Church and at La Mama on Saturday, March 13, 2010 at 3:00 pm.

"I really wanted to write about people that nobody was interested in writing about, the ones over there that were a bit crazed by life and the cosmic encounter. The mad, the people who thought differently." (SB59)

Michael Ellick's sermon about Harry the day after his death can be found on YouTube here.

An interview with Harry by Cookie Mueller can be found here.

More on the Caffe Cino here. 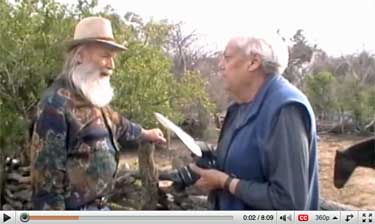 Andy Warhol is currently flavour of the month in Tucson, Arizona. The Loft Cinema is showing a series of his films, the Tucson Museum of Art is showing "Andy Warhol Portfolios: Life & Legends" and an exhibition of photographs at the Eric Firestone Gallery, "Warhol from Dylan to Duchamp" includes shots by Bob Broder of the filming of Lonesome Cowboys which was shot in Tucson in 1968 - and resulted in Warhol being investigated by the F.B.I.

Beautiful Darling, the new documentary on Warhol star Candy Darling, will be shown in London as part of the 24th BFI London Lesbian and Gay Film Festival. The film will be shown on Thursday, March 18th at the National Film Theatre and on March 19th at the Curzon Cinema. The Curzon event will also include a screening of Women in Revolt, a "New York disco (with complimentary Jameson cocktail)" and, according to the Curzon's website, a "chance for you to have your 5 minutes of fame on the big screen." The dress code for the Curzon event is listed as "blonde/fabulous/cross dress."

U.S. premiere of Beautiful Darling at the Museum of Modern Art

The U.S. premiere of Beautiful Darling, The Life and Times of Candy Darling, Andy Warhol Superstar, will take place at the Museum of Modern Art in New York on Friday, April 2, 2010, as part of the New Directors/New Films Festival. A second screening will take place at Lincoln Center on the following day (April 3rd).

The Andy Warhol Foundation has licensed Alien Workshop to produce a series of skateboards featuring Warhol's images. The skateboards will be available in Spring 2010.

A Q & A session with Cosima Spender, the granddaughter of Arshile Gorky, will take place at the Tate Modern in London on 9 April 2010 at 1:00 pm. Cosima's film, Life with Gorky, which includes an interview with Gorky's widow, Mougouch, is currently being shown as part of the Arshile Gorky retrospective at the Tate in the cafe at the end of the exhibition.

A new book, Arshile Gorky: Goats on the Roof, has also been published this year on Gorky's life through letters and documents edited by Matthew Spender which includes rare photographs, excepts from Mougouch's diaries, letters to and from Gorky and articles about the artist.

"Here is an art entirely new... Here is the terminal of a most noble evolution, a most patient and rugged development which has been Gorky's for the past twenty years; the proof that only absolute purity of means in the service of unalterable freshness of impressions and the gift of unlimited effusion can empower a leap beyond the ordinary and the known to indicate, with an impeccable arrow of light, a real feeling of liberty."

More on Arshile Gorky, Surrealism and Abstract Expressionism can be found in The AbEx Chronology here.

Richard Hamilton at the Serpentine

An interview with British Pop artist Richard Hamilton has appeared in The Observer newspaper in advance of his exhibition at the Serpentine Gallery which opens on 3 March 2010. Hamilton was part of the Independent Group in the 1950s and one of Robert Fraser's artists during the 1960s. About Fraser, Hamilton recalls, "We did three exhibitions, then the famous drug bust took place, the gallery closed, and his cheques bounced. But when the gallery was still open, it was terrific." (Fraser also championed Warhol's work in the U.K. during the '60s - Warhol gave a private screening of The Chelsea Girls at Fraser's apartment on the way back from Paris in 1967 and Eric Emerson stayed with Fraser at his flat in London.)

Although the article credits Hamilton with having invented the term "pop art" 53 years ago on the basis of a letter he wrote to the architects Alison and Peter Smithson in 1957, it was actually the Smithsons who first used the term in print in 1956.

During the course of the Observer article Hamilton also gives his verdict on YBAs such as Tracey Emin:

From The Observer article:

"It seems pretty obvious to me that Steve McQueen's film about Bobby Sands, Hunger, was inspired, at least in part, by Hamilton's paintings of the blanket protesters [the Citizen series], and you can see his influence in most contemporary art, whether the artist in question is aware of it or not (though Damien Hirst calls him 'the greatest').

Hamilton admires Hunger but he has little time for the other Young British Artists. He can't imagine a conversation with Tracey Emin lasting more than five minutes – too tedious! – and though he was quite interested in Hirst's sharks, his paintings bore him half to death. He believes that this generation is 'ignorant… they have no understanding of art history. [Their work] is a waste of time. So much of what they're doing has already been done, and not only by Duchamp, even. You think: you're 50 years too late, mate.' Don't even get him started on Sarah Lucas and her antics with cigarettes."

The full article can be read at: here.

Works by Andy Warhol will be exhibited at the Perth Museum and Art Gallery in Scotland from 17 April to 23 October 2010 and the Tate Modern from the summer 2010 to spring 2011as part of the Tate's Artist Rooms tour.

Women in Pop at the University of the Arts in Philadelphia

Andy Warhol: The Last Decade travels to Fort Worth, Brooklyn and Baltimore

The "Andy Warhol: The Last Decade" exhibition will run at the Modern Art Museum of Fort Worth from 14 February to 16 May 2010 before traveling to the Brooklyn Museum during the summer (18 June - 12 September 2010) and finally the Baltimore Museum of Art from 17 October 2010 to 9 January 2011. It recently closed at the Milwaukee Art Museum where it ran from 23 September 2009 to 3 January 2010. Works include selections from Warhol's Oxidation paintings; his collaborations with Jean-Michel Basquiat, Self-Portraits and the Last Suppers which were first exhibited by Alexandre Iolas in Milan in January 1987 at a venue across the street from Leonardo's Last Supper.

"Warhol in his last 10 years of his life was more productive than at any other phrase of his career... The Flowers prints, he cranked those puppies out. But the paintings weren't shown for many possible reasons. The Oxidation paintings, for example, which are the seminal pieces that note the change in Warhol at this point, were only shown very briefly in Paris. No American gallery wanted to show pictures that somebody had pissed all over. You know, that’s kind of gross, to put it crassly."