Then a few of the local authorities began to get rough: was the Censor too permissive, or not permissive enough?

After six weeks, the Trade paper Cinema TV Today, reflecting the views of a prominent member of the film industry, ran the headline: "Murphy must go." At this point, a meeting was convened to defend Stephen Murphy's position: 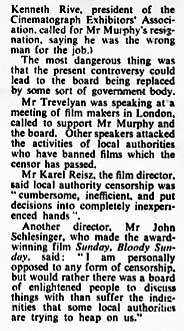 And others agreed... Peter Waymark summed up the Censor's predicament in: 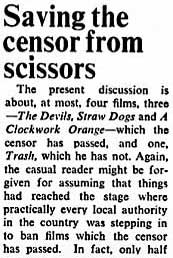 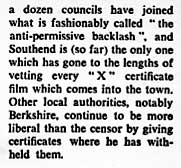 But Trash was still held up. In July, Paul Morrissey, the director, flew in for consultations with the censor, and accepted 3 1/2 minutes of cuts in his film.

We booked Trash into the London Pavilion to open on February 8th 1973.

Then Warhol hit the headlines once again over ATV's documentary [directed by David Bailey]...