In the 26 June 1969 issue of the Village Voice, Lonesome Cowboys was used the to explain "The Warhol Phenomenon" to New Yorkers. 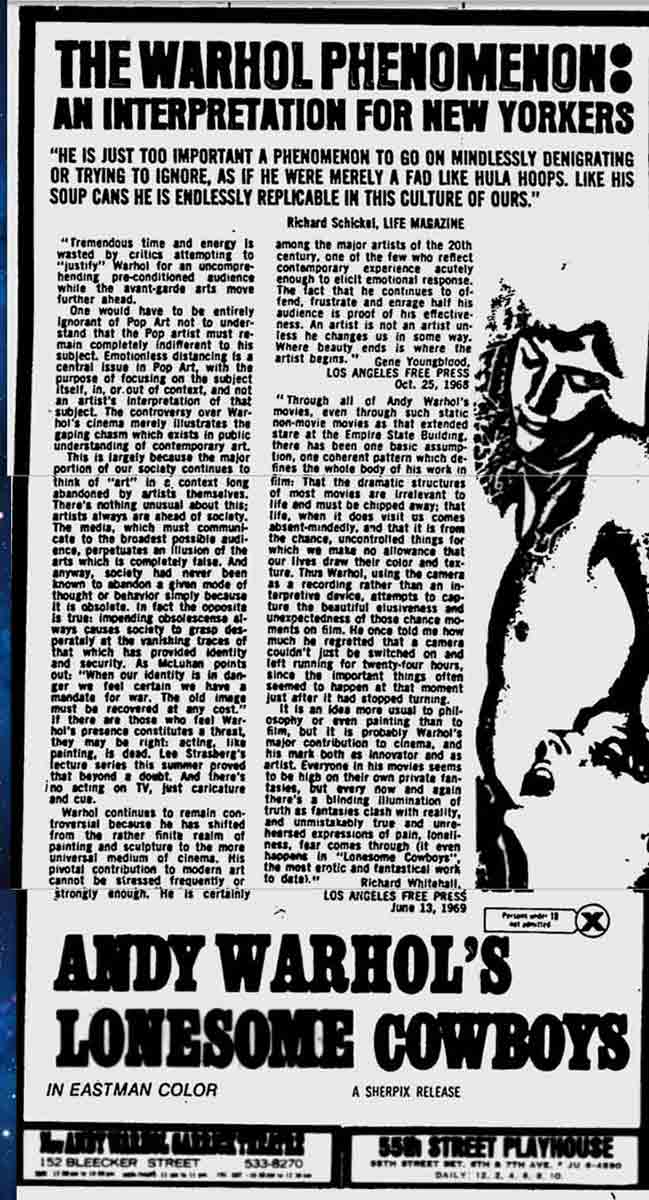 The F.B.I. had continued to monitor the film and in August 1969 it was seized by authorities during its third week of playing at a cinema in Atlanta, Georgia, and the manager of the cinema arrested. (JOE62) Variety covered the raid in its 13 August 1969 issue: 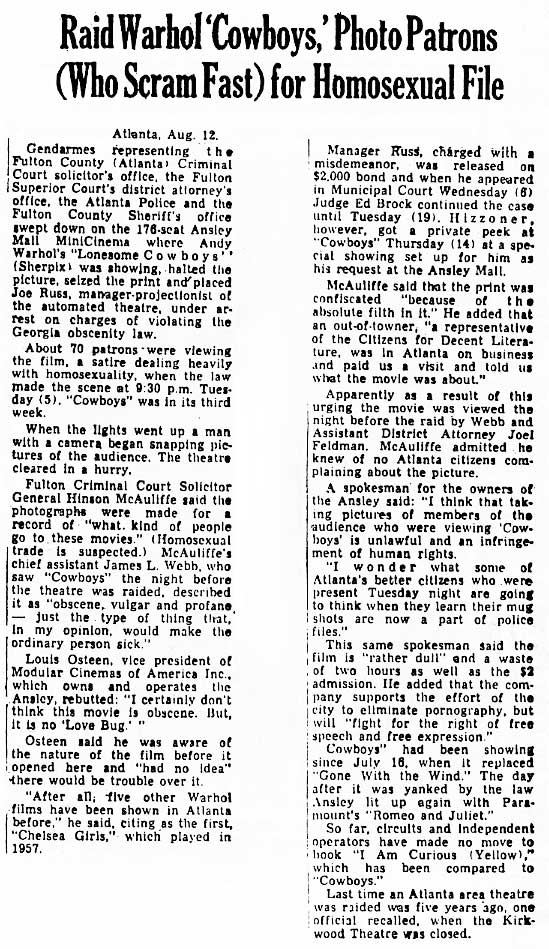 Warhol managed to avoid the film having the film permanently banned in Georgia by agreeing to make six deletions in it - as noted in the 31 December 1969 issue of Variety:

According to Maurice Yacowar in The Films of Paul Morrissey (Cambridge University Press, 1993), "the print was seized for being, as the court solicitor's assistant put it, 'obscene, vulgar and profane - just the type of thing that, in my opinion, woiuld make the ordinary person sick.'" Yacowar notes that "When the audience was photographed so that their pictures could be compared with those of 'known homosexuals,' the American Civil Liberties Union sued for the destruction oft he photos and to protest the unconsitutionality of the raid." (FPM22)

As late as June 1977, the F.B.I. was still reporting on the film. They sent a summary of their file of the film, as well as a description of it from the 1968 San Francisco International Film Festival, to the Carter White House in late June. OP181) The reason for this is unknown. However, Warhol's portrait of Carter was one of the works included in the 1977 Inaugural Portfolio, which also included work by Robert Rauschenberg, Roy Lichtenstein, Jacob Lawrence and Jamie Wyeth. A reception for the artists was held at the White House on 14 June 1977. When Warhol and his portrait of Carter were presented to the President during a ceremony at the reception, the President, by mentioning "the Plains," sounded almost cowboy-like in his response:

Andy Warhol is also a very good friend of mine. He came down to Plains to visit us, and when he left, I have to admit I was very disappointed. He had about a $25 camera and he was going to help us raise an enormous amount of money during the campaign--enormous amount to us then, and it turned out to be very successful. And his first painting of mine, which was distributed in a very limited edition and which has magnified over and over in value already, was one of the turning points in the financing of our campaign.

He did it to help me and to help the Democratic Party, and I think that his painting of me, based on that photograph, was superb. It kind of grows on you. [Laughter]

I do think that this new one is different. The first one was frowning and scowling and worrying because I was broke, I had lost some primaries, I didn't know where I was going to go next, and the fact that Jamie Wyeth and Andy Warhol were willing to help me kind of turned the tide.

And now I think it's very significant that this picture is smiling. And I am going to try to keep myself smiling and maybe all of you smiling for the next 4 years.

But Andy, I do really thank you for it. I particularly want to thank Tom Beard for making all of this possible and also--is Joan Mondale here? I didn't see Joan. I know Fritz - here she comes. I think Joan is adding a lot to American art and music and drama, don't you? [Applause]